Medievalist references littered the insurrection at the US Capitol on January 6th.

Rudy Giuliani called for a “trial by combat”; the “Q Shaman”, Jacob Chansley (also known as Jake Angeli), was covered in Norse tattoos; rioters brandished a flag with a Crusader cross and the Latin words Deus Vult: a Crusader war cry meaning “God wills it” that has been taken up by the far-right.

These far-right appropriations of the European Middle Ages are important reminders that recent violence has a long history and global scope. Medievalist symbols were displayed at the 2017 Unite the Right rally in Charlottesville. The Christchurch terrorist’s manifesto referred to Norse and Crusading medievalisms.

There are many other examples.

Extremists misinterpret and appropriate medieval culture to suit their own purposes. They add new modern meanings to historical images and ideas and put them in new contexts. To understand why and how, we need to look to the modern world, not the Middle Ages.

In the late 18th century, nations like England, Germany and France needed new origin stories that accounted for the emerging pseudo-science of race and the support imperialist claims of superiority over peoples they sought to subjugate. 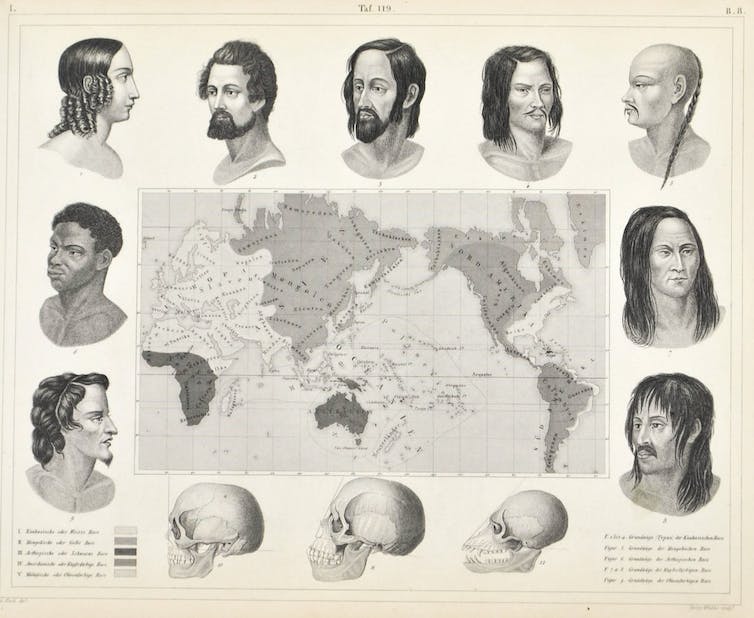 In the 18th Century, white Europeans developed new unscientific definitions of ‘race’, such as in this 1851 map of Johann Friedrich Blumenbach’s five races. Wikimedia Commons

The Middle Ages had been understood as a dark period of barbarism between Classical and modern times, but were re-imagined as the crucible of European whiteness and its variations such as “Celtic” and “Anglo-Saxon”.

The roots of social and cultural institutions were linked to ideas of biological descent.

In the 1700s, the Germanic “Gothic race” was understood, especially by the English and Germans who claimed descent, as having an inherent love of freedom, capacity for violence and respect for women. These supposed qualities were said to have led to the feudal system of government, chivalry and particular cultural aesthetics.

Read more: A scholar of American anti-Semitism explains the hate symbols present during the US Capitol riot

The same ideas were linked to an imagined “Anglo-Saxon race” in the British Empire and its colonies. Racialized ideas about freedom that come from the 18th and 19th century are still influential among white extremists.

In architecture, academia, literature, language and art, whiteness was associated with the Middle Ages in ways that still resonate in 21st century society and culture. Pre-Raphaelite art created a white medievalist aesthetic reflected in modern TV shows like Game of Thrones (2011-19) and The Last Kingdom (2015–). 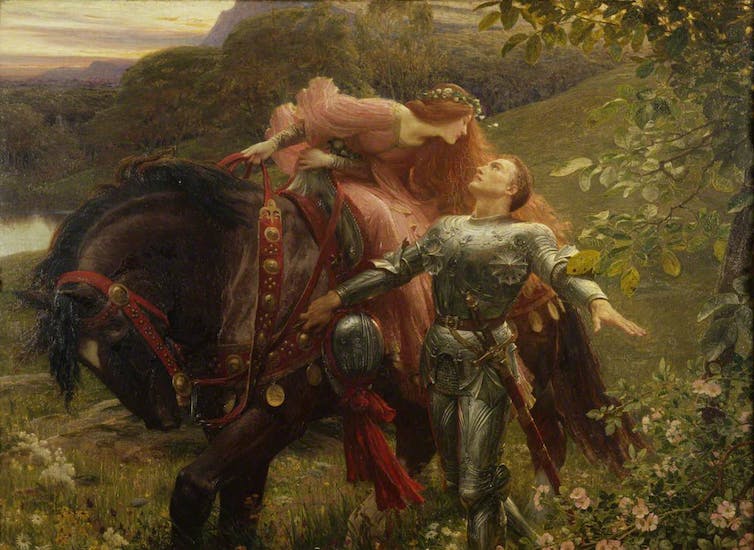 The pre-Raphaelites reimagined the Middle Ages as a white society, such as in this 1901 painting by Francis Bernard Dicksee. Bristol Culture, CC BY-NC-SA

This association of white racial and cultural identity with the European Middle Ages is still strong in mainstream culture, as well as among extremists. We only need to look at controversies, such as the black British actor Jodie Turner-Smith playing Anne Boleyn.

Why do white supremacists use medievalist symbols?

White extremists take up existing ideas to legitimise their ideologies and false claims about the past. A rigidly structured feudal society ruled through violence by a king and nobility is appealing to fascists.

Most Western nations, including Australia, understand the European Middle Ages as part of their heritage. A copy of the Magna Carta, an English royal charter from 1215 often said to have enshrined trial by jury and other legal freedoms, hangs in Parliament House in Canberra. This makes medievalist symbols useful in allowing extremists to reach across national borders.

Medievalism is everywhere in contemporary Western culture, from entertainment like Vikings (2013-20) and the Assassin’s Creed video game franchise, to home loan and credit card advertisements, political discourse, themed restaurants and much more.

This helps make extremist associations deniable. Hate symbols can be hidden in plain sight when their meaning is open to question.

While Chansey’s tattoos are classed as hate symbols by the Anti-Defamation League (ADL), they also note they are sometimes used by “non-racist pagans”.

Read more: US Capitol riot: the myths behind the tattoos worn by 'QAnon shaman' Jake Angeli

Popular culture medievalisms contribute to this deniability and provide opportunities for radicalisation through shared interests.

Former Ku Klux Klan member Derek Black started a section dedicated to Lord of the Rings and fantasy (a major area of popular medievalism) on the white supremacist site Stormfront in the early 2000s specifically to recruit people to white nationalist ideology. He told the New York Times he thought people who liked the “white mythos” of Lord of the Rings could be “turned on by white nationalism”.

More recently, video games and gaming websites — where medievalist material is common — have become major sites of concern for anti-radicalisation practitioners and policy makers because of activity by the far right.

Recent years have seen an increase in white extremist violence, including — but not limited to — mass-murderous terror attacks. It is increasingly important that we are aware of hate symbols.

The ADL’s advice to consider context in deciding if a particular use of a symbol is “racist” is not necessarily useful in deciding whether it is a sign of white extremism because of deniability and exploitation of common beliefs.

Medievalist symbols like those displayed at the Capitol have been linked to white European identities for centuries. Their use by violent extremists means that this connection can not be denied, ignored, or thought of as a neutral choice. We must deliberately, actively, and explicitly reject hateful meanings and the violence that goes with them in all aspects of our medievalist modern world.