The report found 36.9% of nursing home residents presented to an emergency department at least once in 2018-19.

It’s one of many research papers specifically commissioned and published to inform the Royal Commission, which will release its final report by February 26 this year.

The findings are a welcome addition to the dearth of information about the quality of aged care in Australia. It’s unacceptable that it’s taken a Royal Commission in 2021 to uncover simple information about hospitalisation rates.

Aged care in Australia suffers the same accountability deficit as other aspects of human services, but that is slowly changing.

What the data can tell us

The report found about 3.4% of residents were admitted to hospital for a pressure injury, about 2% for weight loss, and 0.5% for an adverse medication event in the same time period. These rates are just the tip of the iceberg, as they represent those who were serious enough to be hospitalised and don’t include people who were treated in the nursing home and didn’t require hospital admission.

Importantly, the report says there are many facilities which are outliers on one or more of these measures. There are some facilities where the residents have significantly higher rates of hospital admissions for pressure injuries, weight loss, or adverse medication events than others. The report does not identify these but, in the medium term, the public has a right to know which residential aged care facilities are of concern and which are managing these quality risks well. 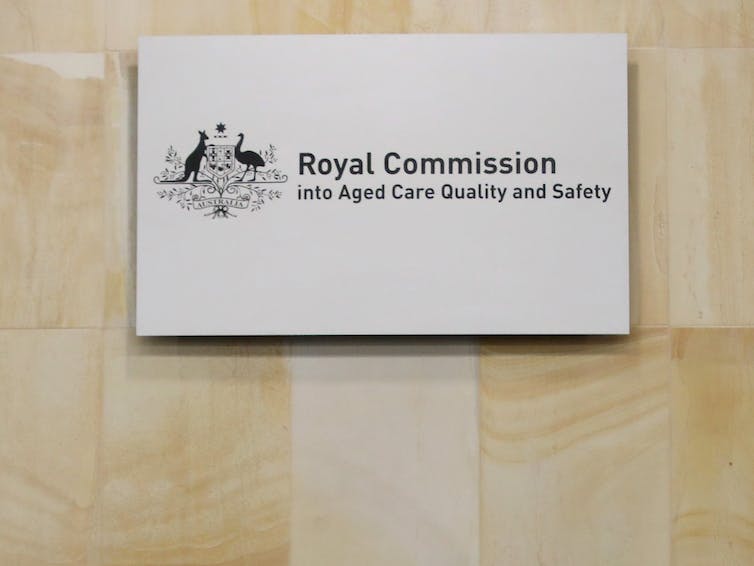 The Royal Commission into Aged Care Quality and Safety will release its final report by February 26. Kelly Barnes/AAP

The data can’t tell us everything

But we need to be cautious about these findings. We cannot use the rate of falls and other injuries as the only indicator of quality care.

One way residential aged care facilities can minimise the risk of falls leading to hospitals admission is by better care and assessment of residents. And on the other hand, facilities should resist the urge to overreact by stripping residents of their autonomy and not letting them move around, nor letting them take any risks at all. Quality care also means treating residents with dignity.

Another risk of these data is they’re very health-oriented. The health sector, and especially hospitals, have lots of good data and so it’s easy to develop measures relating to hospitalisations. As good as the published data are, the risk is that decision-makers will focus on what’s measurable, rather than what’s important.

Reform in the aged care sector must have a rights basis, as we at the Grattan Institute pointed out in our 2020 report on rethinking aged care. The full range of residents’ rights needs to be promoted and protected.

More work needs to be done on measuring whether the rights of older Australians are being upheld alongside these hospital-oriented measures, and resident-relevant measures of quality including use of agency staff, staffing ratios, and dealing with individual preferences and differences.

In light of calls for increased transparency and accountability in aged care, the regulator should provide feedback to all nursing homes about where they stand on these metrics and then identify relative performance publicly.

Read more: If we have the guts to give older people a fair go, this is how we fix aged care in Australia

Now these data have been collected and shown to be relevant, it’s now unethical for the regulator to withhold this information from the public, especially when the rhetoric about aged care is about promoting choice in a market where people choose their residential facility. Although providers are asked to report against quality standards to the regulator, very little of this information is passed on to the consumer.

The aged care regulator should set a target of publicising performance metrics for the December quarter 2021, and do so on an ongoing basis.

Performance metrics should also go beyond hospitalisation rates, and include information about staffing numbers and ratios as is done in the United States with its star rating system. They should also include the number of complaints and assaults — information which is currently unavailable to older Australians needing care.