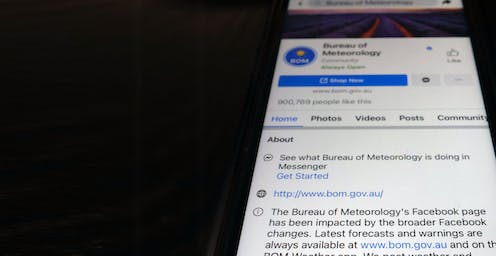 The Conversation is a great news site. But, for the most part, people don’t read it like a newspaper. Instead, articles on specialised topics are shared with other people. One way is via Facebook.

Yesterday, almost none of that was possible worldwide for the Conversation’s Australian content because Facebook opted to ban all news (even seeming news ) from Australian sources to avoid being designated for compulsory negotiations under legislation before the Australian parliament.

The government’s new media bargaining code was a response to the Australian Competition and Consumer Commission’s digital platforms inquiry that found it was hard for content providers, including but not limited to news organisations – to deal with platforms whose rules were always changing.

Parts of these grievances are legitimate, and relate to editorial and algorithmic issues. Others relate to the platform’s stranglehold on online advertising.

But rather than tackle these issues head on, Australia’s government sliced out a sliver of the sites affected – news sites – and attempted to fix things for it, saying it’s concerned about competition.

To any economist, the point of competition policy is to encourage competition. In this case, either more digital platform options for consumers, or more news content options.

But the government’s legislation seems to be uniquely designed to deliver neither.

The code allows news organisations to negotiate with large digital platforms about things such as how their algorithms work to prioritise content, and money.

And money is what it is really all about. The news organisations want more of it, large digital platforms have it. It’s that simple.

It is not unknown, especially in Australia, for competition policy to work by first allowing parties to negotiate, and then imposing a regulated settlement only if they fail.

And its normally about empowering the little guy, in the belief that’s what leads to socially desirable outcomes.

But not in this case. It is only the large news organisations that would be allowed to negotiate over money.

It’s quite different to the system adopted in France, whose government is able to collect money from digital platforms via a tax, which can, should the government wish, be distributed to content providers on a criteria other than naked private interest. The French system isn’t clearly pro-competition either, but it at least provides a mechanism that could enable good outcomes to occur.

The Australian process fails to deliver competition in two ways.

First, it allows the treasurer, rather than a judge, to designate the platforms the process will apply to. He is unlikely to designate a platform that large media organisations have no problem working with, as that will entail work.

Second, the treasurer is unable to designate a platform that doesn’t carry any Australian news. So if a digital platform wants out, it can get out.

Both of these things have begun to come to pass in the last day — even before the code has been legislated.

Google has done deals with some large news outlets and thereby signalled it will do deals with others to ensure it is not designated. It means Google won’t have to deal with all of the other smaller voices that also have a problem with it.

Facebook has opted out of the news content business altogether, as the law allows it to. It decided Australian news wasn’t worth it, at least for now. Australians can still share news from around the world, which in some ways is more valuable to them than local news they are already aware of.

Bizarrely, before the government’s proposed legislation, if Facebook had excluded content from suppliers in order to get a better deal, Australia’s Competition and Consumer Commission could have prosecuted it for exclusionary conduct.

The new code gives Facebook a licence to do what it has just done, and argue that it could not have been exercising market power because it was merely using the steps identified in the code as necessary for it to avoid compulsory arbitration.

In other words, the entire process has had the (I hope) unintended consequence of enhancing the very market power that it claimed to intend to contain.

No more platforms, no more competition

There will be no improvement in any competitive outcome whatsoever. As often happens in Australia, oligarchies will consolidate, and consumers will get nothing.