American officials and those representing other parties to a Quadrilateral Security Dialogue (“Quad”) may try to pretend that a summit of Quad leaders was not driven primarily by concerns about a China threat.

Briefing reporters after the meeting and the announcement of a vaccine deal to help low-income countries fight the COVID pandemic, US National Security Adviser Jake Sullivan sought to play down the issue when he said the Quad was not fundamentally about China:

The Quad is not a military alliance; it’s not a new NATO, despite some of the propaganda that’s out there.

But the fact is there would be no Quad, and no inaugural summit of the leaders of the US, Japan, India and Australia if it were not for deepening alarm among the US and its allies about how China’s rise might affect peace and stability in the Indo-Pacific.

The leaders’ joint statement leaves no doubt a China preoccupation is driving the elevation of this body to national leader status. In doing so, it invests it with much greater significance. The statement reads:

We strive for a region that is free, open, inclusive, healthy, anchored by democratic values and unconstrained by coercion.

If this is not “fundamentally about China”, it’s not clear what it is about.

It remains to be seen whether the first Quad summit bolsters the group’s ability to counter a rising and increasingly assertive China, or whether differing priorities among its participants expose its limitations.

The Quad is being marketed as a constellation of liberal democracies against an illiberal China. But there is a world of difference between how each of the participants view and interact with China.

Read more: Australia has a great chance to engage in trade diplomacy with China, and it must take it

Not just about China

In assessing the likely effectiveness of the Quad, it is well to keep in mind that nations do not have permanent friends or permanent enemies – just permanent interests.

Canberra would be foolish to invest too much faith in what is, at this early stage, a consultative body that will meet semi-regularly to discuss regional challenges and conduct military exercises.

Prime Minister Scott Morrison would be advised to contain his exuberance in describing the Quad as the arrival of a “new dawn”.

This is not a “new dawn” in Asia, even if we are witnessing a Chinese sun rising.

In a paper – How Biden can make the Quad endure – the Carnegie Endowment for International Peace argues the body needs to avoid a “China Trap” – becoming a narrowly-defined China-obsessed body – and seek to broaden its scope.

In this regard, it is a positive development that Quad leaders have undertaken to supply up to one billion coronavirus vaccines across Asia by the end of 2022. This is a practical demonstration of the Quad’s potential and one aimed at countering China’s soft power. 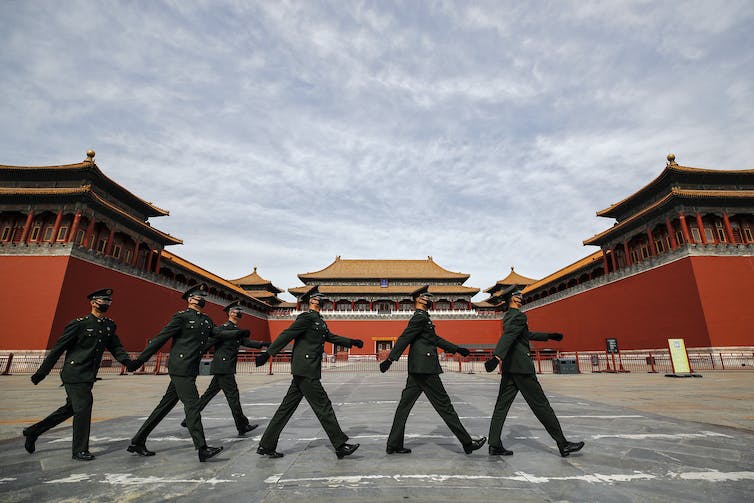 The Quad must ensure it doesn’t fall into the ‘China trap’, making everything about Beijing’s rising power. AAP/AP/Andy Wong

A ‘new kind of diplomacy’

History is important to understanding the Quad’s genesis and where it might head. The body owes its start to the establishment in 2004 of an ad hoc grouping formed to deal with the devastating Boxing Day tsunami.

The United States, Japan, India and Australia established what was described then as the “Tsunami Core Group”. This initiative represented a “new type of diplomacy” to face an existential challenge.

In 2007, the first meeting of the Quad was held on the fringes of the ASEAN Regional Forum in Manila. The Quad showed promise as a regional grouping, but the Kevin Rudd government, elected that year, abandoned the Quad dialogue on the grounds it would be perceived as being part of a China containment policy.

This did not align with Labor’s strategic impulse, which was to continue to elevate relations with Beijing.

In 2017, under the Turnbull government, the grouping was revived. It has been described as “Quad 2.0”, to distinguish it from its first iteration.

Since then, participants elevated a dialogue among themselves to defence and foreign minister level. Quad countries have also participated in regular military exercises. However, until last week, when newly-elected President Joe Biden decided that in his first significant foreign policy initiative he would bring together Quad leaders, the body had lacked head-of-government imprimatur, and thus credibility.

Biden’s description of the Quad as a “vital arena for cooperation in the Indo-Pacific” means it has the potential to become an important component of a regional security architecture.

This is provided it does not get bogged down in a defensive anti-China mindset in dealing with regional concerns from China’s power to climate change to health challenges.

Helping to put the Quad summit into perspective is the planned meeting late this week in Anchorage, Alaska between US Foreign Secretary Antony Blinken, Sullivan and their Chinese counterparts. This includes Foreign Minister Wang Yi.

This will be the first high-level meeting between senior American and Chinese officials since the inauguration of the Biden administration on January 20. The Anchorage meeting will be critical to Washington’s efforts to establish a better working relationship with Beijing.

Top of the agenda will be discussion about a prospective summit between Biden and Chinese President Xi Jinping.

This is shaping as one of the more important encounters of the modern era.

Testifying last week before the House Committee on Foreign Affairs, Blinken said the Anchorage meeting would be an opportunity

to lay out in very frank terms the many concerns that we have with Beijing’s actions and behaviour.

The Blinken-Sullivan meeting with Chinese counterparts will be framed by a discussion Biden had last month with Xi in which he told the Chinese leader the US intended to challenge China’s “coercive and unfair economic practices” as well as its record on human rights, and its crackdown on Hong Kong.

According to the White House summary of that discussion, Biden also said he hoped to cooperate with Xi on matters like the coronavirus, nuclear proliferation and climate change.

There was no indication from the summary whether Xi had raised with Biden his election description of the Chinese leader as a “thug”.

Read more: Hopes of an improvement in Australia-China relations dashed as Beijing ups the ante

China’s response to the Quad meeting has been predictable, although less florid than might have been anticipated. This no doubt reflects an understanding in Beijing that attitudes in New Delhi, Tokyo, Washington and Canberra are not identical. This is how Beijing’s mouthpiece the Global Times put it in a commentary:

The Quad is not an alliance of like-minded countries as the US claims. The three countries other than the US would probably take a tactic of coordinating with the US in narrative while sticking to their own approaches to China.

Beijing will seek to wedge Quad members where it believes opportunities arise. Its wedge diplomacy will be a test for the group’s solidarity in its efforts to provide a regional counterweight to China.

Consolidation of the Quad’s importance will depend on self-interest of its various participants and circumstances. Beijing’s willingness to acknowledge the legitimate interests of Quad members will determine whether it proves to be a useful addition to a crowded regional architecture, or another irritant in an increasingly fractious relationship between China and the West.