Weeks of mealy-mouthedness in the face of horrendous claims of misogyny, boorishness, and even alleged sexual assault in Parliament House, had begun to take their toll. Morrison’s approval ratings have slid and put his government behind Labor on two-party preferred in recent Newspoll surveys.

Before then, pressure had been mounting on Opposition Leader Anthony Albanese, amid fears within Labor of a possible spring election. Nobody’s worrying about that anymore.

Monday’s female-friendly cabinet reshuffle was the first significant concession from the prime minister that he faced something wholly more substantial than a common-or-garden governmental crisis. This was not some routine controversy to be managed, spun, and outlasted.

In politics, messages are important. The most significant messages in the reshuffle were the demotion of Attorney-General Christian Porter and the elevation of the Industry and Science Minister, Karen Andrews, to the hawkishly masculine, security-heavy mega-ministry of home affairs.

Read more: View from The Hill: Morrison sets up his own women's network but will it produce the policy goods?

As a Queenslander, she is a member of the colourfully conservative LNP, along with more bombastic alpha-males such as Peter Dutton, George Christensen, Matt Canavan, and Andrew Laming.

Yet for all their jaw-jutting, Andrews has impressed stakeholders in her industry sector. She has also attracted attention in the parliament for being both uncommonly capable, and refreshingly unpolitical. 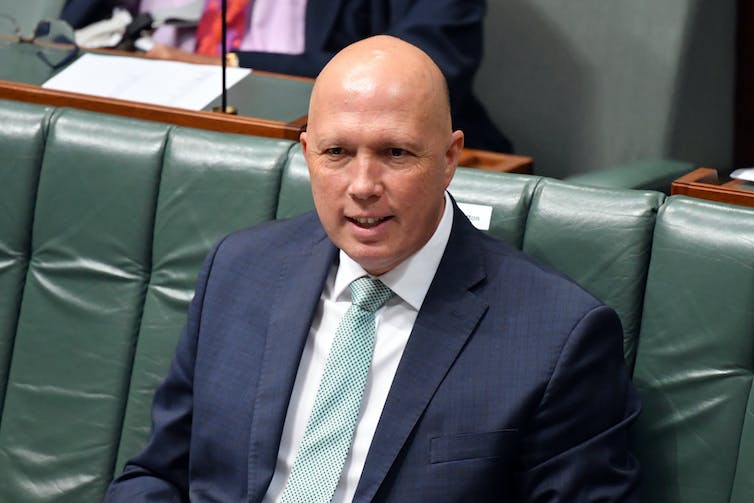 However, competence is hardly a guarantee of promotion in Canberra. It can even be a liability. Indeed, not being a partisan attack dog can mean forgoing notoriety, and the phalanx of party true-believers that comes with it.

So while Morrison has sent the signal about upping the female participation in his executive, Andrews would certainly have made it had merit been the only selection criterion.

Breaking through glass ceilings is familiar territory for the 60-year-old former small business owner. In 1983, she joined another female student at the Queensland University of Technology to become the first females to receive a bachelor of mechanical engineering.

But all eyes now are on what her stewardship of the powerful home affairs ministry will mean for the government. More importantly, there will be much interest in what it might mean for asylum seekers and refugees, and the plethora of legal and security issues attaching to the Australian Federal Police, Australian Border Force, immigration and settlement services, cyber-security, and other agencies.

Interest in her appointment is doubly spiced by the fact she replaces Dutton, the unrivalled hard man of the Morrison government and leader of the parliamentary Liberal Party’s national right grouping.

Dutton has been a lightning rod for criticism, most notably for his uncompromising approach to asylum seekers, and his outspoken attacks on the political left.

Read more: Scores of medevac refugees have been released from detention. Their freedom, though, remains tenuous

Ahead of his move to defence, a portfolio he is known to have coveted, Dutton indicated he was considering possible defamation remedies for a slew of attacks on social media sites such as Twitter and Facebook.

Andrews has declined to comment on the possibility of bringing a more compassionate approach to refugee applications and deportations. But she has nominated one area that will be of interest to women and to Dutton, telling Sky News on Tuesday she wants to address the scourge of online disrespect – particularly by anonymous people:

[I] will certainly be taking an active interest and engaging as much as I possibly can on that issue.

Look, social media has significant challenges, one of those issues is the level of anonymity. We need to make it very clear that people can’t hide or should not be allowed to hide on these social media platforms so absolutely I will be taking a very close look at that. 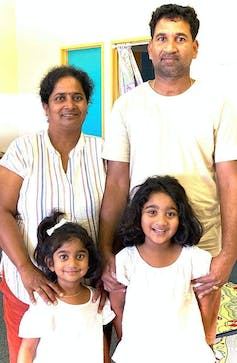 The Murugappan family has been held on Christmas Island since August 2019. AAP/supplied

Top of mind for many, though, is the Biloela asylum seeker case, in which a Tamil family of four has spent more than 1,000 days in immigration detention initially in Melbourne, and since August 2019, on Christmas Island.

Dutton’s department has been desperate to deport Nades and Priya Murugappan and their Australian-born daughters, Kopika and Tharnicaa, but has been blocked by successive legal proceedings.

Advocates for the family say the deportation is cruel and the detention is unconscionable, especially in view of the willingness of the Biloela community in rural Queensland to host the family’s return.

While human rights groups will be looking for signs Andrews intends to soften the Dutton approach, she has refused to comment before extensive briefings.

Australia’s notoriously tough suite of border policies may be in for a more compassionate, case-by-case interpretation. It is possible changes could go beyond that and into broader policy.

On the other hand, it is important to remember the trophy in the PM’s office, which rather crassly proclaims, “I stopped these”, above an unmistakable silhouette of an Asian fishing boat.

As a former immigration minister, Morrison is critically aware of how the Coalition’s harsh policies allowed it to position Labor as “soft” on borders.

Populist though it is, it is not an electoral advantage that Morrison, nor for that matter Dutton as a still influential cabinet figure, will surrender lightly.