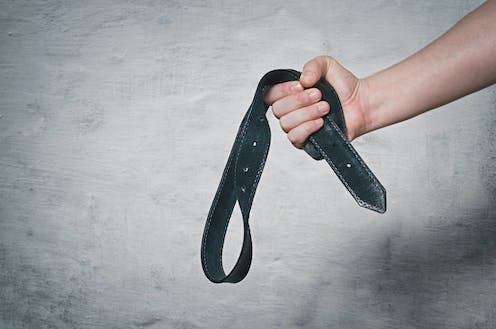 Intimate partner violence is indisputably a crisis in Australia.

State and federal governments have invested heavily in family violence prevention. However, one area of violence prevention has until now been overlooked. A growing body of research has found a consistent link between experiencing corporal punishment from a parent – in the form of smacking – as a type of violence, and those children going on to be involved in partner violence in adulthood.

I reviewed this literature, as well as the prevalence, frequency and severity of corporal punishment practices in Australia. I found Australian policymakers have an opportunity to further strengthen partner violence prevention strategies by legislating against the legal defence of reasonable chastisement of children in the states and territories. In other words, ban smacking.

While there is a strong link between being abused as a child and growing up to become involved in partner violence, smacking has historically been considered relatively innocuous.

However, emerging research has found smacking has a similar effect on a child’s brain to that of abuse, in that the stress and fear it provokes can cause changes to some neurotransmissions. It is more likely to lead to alcohol misuse, depression and anti-social and aggressive behaviours, which may in turn be antecedents to partner violence.

Read more: A wake-up call for parents who smack their children

Prominent researchers have built a solid case for including corporal punishment as an Adverse Childhood Experience, a range of childhood experiences known to cause toxic stress linked to adversity in adulthood.

Social learning theory is also often applied to explain subsequent aggression in children who were smacked. We learn how to behave according to what we see and experience, and smacking tells the child that violence is an acceptable and normal way to show frustration and deal with others’ “misbehaviour”.

This is supported by research spanning 32 countries that found that people who had been smacked as children were more likely to approve of intra-marital violence. So normalising violence within a family to a child increases the likelihood of their involvement in partner violence in adulthood, as victims as well as perpetrators.

According to UNICEF, violence toward girls starts with corporal punishment in adolescence. And families where partner violence is occurring are also more likely to smack their children.

Researchers have argued that, in line with the UN’s Sustainable Development Goals, a no-tolerance approach to violence across society may increase reporting rates of partner violence and strengthen the message that violence is never okay, no matter who the victim is.

Sweden was the first country to ban corporal punishment in all settings in 1979. The first generation of children to be raised under this legislation are now being studied, and some research shows there is less violence among adolescents in countries where corporal punishment is banned.

While these are promising findings, there are too many other factors at play, such as social and cultural structures, to be able to compare Sweden and Australia too closely.

Despite the potential importance of corporal punishment as a precursor to partner violence in adulthood, research on it in Australia is lacking. However, it is likely rates are high.

Read more: What are the best ways to discipline kids?

Politically, banning corporal punishment in the home is an unpopular idea. The Greens are the only party to imply support for banning smacking by way of advancing the UN Convention on the Rights of the Child.

Parents are generally deeply opposed to allowing the government to tell them how to parent. Many grew up being smacked themselves and argue it never did them any harm.

It is therefore likely a ban on smacking in Australia would be met with much opposition. Yet in countries where smacking has been banned (currently 62), frequent initial opposition by the majority of the population has invariably turned into acceptance of and support for such a ban. Broadly targeted education campaigns and parenting support to teach alternatives to smacking have been successful in these countries.

Given the strength of evidence on the issue, we need to look seriously at the link between corporal punishment and partner violence to prevent partner violence in Australia. Attitudes and behaviours have the best chance of being learned and accepted early in life, and preventing violence against children presents an opportunity to teach both children and adults that violence is never okay.