From the moas of New Zealand to the dodos of Mauritius, humans have hunted many island-dwelling species to extinction in the relatively recent past. But our research reveals humans haven’t always necessarily been agents of ecosystem destruction.

Our study, published today in Proceedings of the National Academy of Sciences, shows that until around 12,000 years ago, the arrival of humans on new islands didn’t spell certain doom for the animals that already lived there, and that in most cases their extinction was due to many different factors.

That has since changed, of course. When humans first arrived in New Zealand around the years 1250–1300, they brought with them sophisticated toolkits, advanced maritime technologies, and a few animal companions. They landed in an ecosystem that had never seen any of these things.

Within a few centuries of landing, the biggest animals on these islands, the giant moas, were extinct, and alongside them numerous other birds, reptiles and amphibians. The true extent of these extinctions will probably never be known, but almost certainly runs to more than 30 different species. In other Pacific islands the scenario was much the same.

Further afield, on the Indian Ocean island of Mauritius, the arrival of humans was so inextricably linked to the demise of the dodo that this species has become a global emblem of extinction.

These events, relatively recent in evolutionary terms, have fostered a powerful and enticing narrative: that humans are perennially the agents of destruction and ecological folly.

These episodes of overhunting prompted the US geoscientist Paul Martin to propose his “overkill hypothesis” to explain extinctions of iconic species at the hands of humans. Martin surmised that when humans arrived in North America, they began hunting the biggest animals they found. Within a few generations, these “megafauna” had been wiped out.

This hypothesis has since been applied around the world. Megafauna extinctions in Africa, Europe, North America, South America and Australia have all been attributed to humans overhunting animals, destroying their habitats, or both.

In a relatively obscure part of the world, however, our earlier research revealed a different story. We work in Nusa Tenggara Timur, a series of small islands found in eastern Indonesia and Timor-Leste and north of Australia. Although these islands have never been connected to the mainland, the earliest records of humans date to about 45,000 years ago. They also hosted various now-extinct species, including stegodons (elephant-like creatures), giant rats, and birds.

As we analysed fossil and archaeological records across several of these islands, it became clear the extinctions here were not caused by human overkill. Some species from Nusa Tenggara Timur, such as the stegodons, disappeared well before modern humans arrived. Others, like the giant rats, lived alongside people for tens of thousands of years, withstanding millennia of hunting and consumption. 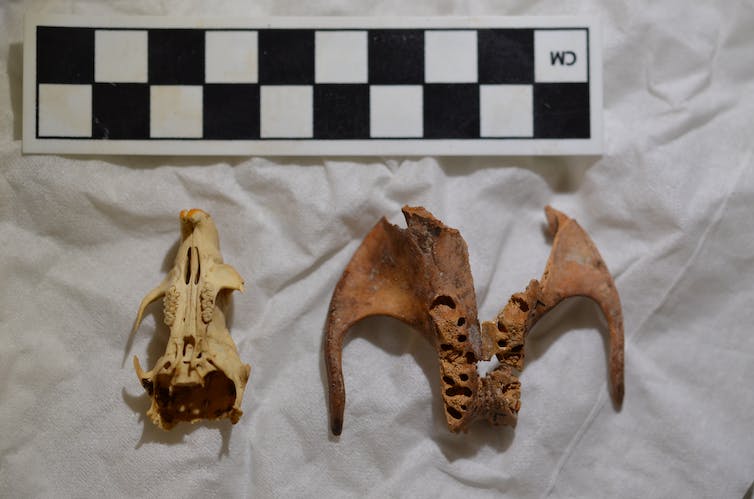 Prehistoric giant rats’s skulls (right) were much bigger than those of their modern-day cousins. Author provided

Why were these island extinctions so different from the more famous human-caused examples elsewhere? Perhaps it was the fact that humans arrived relatively early, in smaller numbers, and with less sophisticated hunting tools. Or perhaps it was the nature of the islands themselves.

To try to answer these questions, we mounted a global investigation of the impacts of humans and their evolutionary ancestors on the species that lived on islands. Our study covered a huge span of time known as the Pleistocene: from 2.6 million years ago, when humans’ evolutionary ancestors began spreading across the globe, to 11,700 years ago, shortly before modern humans developed agriculture and new technologies.

This vast period predates the times when most islands in the Pacific and Indian Oceans were first occupied.

We assembled leading archaeologists and palaeontologists who study island ecosystems. Next, we compared notes to see whether the extinctions of animals on each of these islands coincided with the arrival of humans.

Humans off the hook?

On only two islands, Cyprus and Kume, were all extinctions coincident with humans’ arrival. Some other extinctions on other islands also coincided with human colonisation. But, broadly speaking, the dominant pattern across all the islands we examined was that there was no relationship between humans arriving, and local animals going extinct.

This was true of both oceanic and continental islands (islands connected to continents during periods of lowered sea levels). In the latter, extinctions mostly happened when the islands were connected to the mainland. In the former, we found that volcanic eruptions weren’t coincident with extinctions either.

Read more: It was growing rainforests, not humans, that killed off Southeast Asia's giant hyenas and other megafauna

Our study revealed important aspects of the relationship between islands, humans and extinctions. First, no two islands are the same. Each will be impacted differently by people, and in some cases the impacts may not necessarily be detrimental – in fact, they could conceivably even be beneficial.

Second, it was not until the past few millennia that humans began to wreak widespread destruction on island ecosystems. These are a result of overhunting, yes, but probably more from environmental degradation, introduction of invasive species, and overpopulation.

Our research shows that even in the most fragile ecosystems — islands — humans have not always been the agents of destruction they are today. We should be wary of projecting recent human behaviours and their negative impacts into the deeper past. And taking a broader view of prehistoric extinctions will help inform our current efforts to save the species that survive today.