“Among all species, it is perhaps only humans who create habitats that are not fit to live in.” – Stephen Marshall

It’s a damning statement but one that can be reasonably argued to be true. We don’t have the best track record in creating lasting and sustainable habitats, especially if one considers cities built in the past century.

The next 50 years will demand a new model of urban development. For a more sustainable future in a world of climate change, 21st-century cities must be based on models of adaptation that learn from natural systems. We now have the digital modelling technology to design such cities, rather than the fixed urban form that now dominates our world.

The legacy of cities built for cars

We are witnessing firsthand the destructive impact of an urban model that dates back to the early 1900s. The automobile was seen as the future of city planning. The city itself was designed like a machine: finite, predictable, perfect and, of course, shiny!

The “ideal” or “utopian” city, put forward as a visionary model for the 20th century, changed the course of city planning. It abandoned the traditional urban fabric of the previous five millennia for a modern urban order in which the car took centre stage. Car manufacturers even invested in 20th-century city design in the continuous pursuit of Utopia.

One of the most influential architects and urban planners of the 20th century, Le Corbusier, did not shy away from the role the automobile would play in city design. He even pursued sponsorship from companies like Citroen, Michelin and Peugeot to realise his vision. “The motor must save the great city,” he wrote. 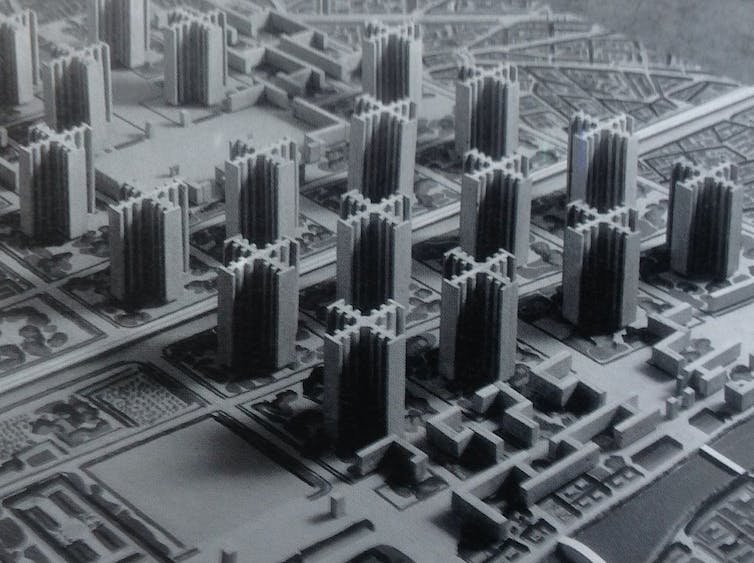 A one-size-fits-all model of repetition

Most important to this model was the concept of repetition. If it works in Chicago, it will work in Chandigarh.

As the “utopian” urban movement dominated, “Utopia” turned out to be not necessarily a good thing. As early as the 1960s this had become clear through the works of critics like Jane Jacobs and Christopher Alexander. As Jacobs wrote:

Le Corbusier’s dream city was like a wonderful mechanical toy. But as to how the city works, it tells nothing but lies.

Read more: What might Jane Jacobs say about smart cities?

Cities throughout the world, across a range of scales and locales, exemplify this. Brasilia (Brasil), Detroit (USA), Milton Keynes (England), Norilsk (Russia) – the list goes on – were designed as modernist visions of a single, finite solution. However, this vision quickly unravelled. Overpopulation, climate change, diminishing resources, rampant commercialisation and demographic change have destabilised the urban fabric of modernist cities.

This unfortunately did not deter the continued planning and construction of this “universal city”. All too often the urban pattern was repeated blocks distributed across a grid with little adjustment to the local ecology or environment. Factor in a rapidly changing climate and exponential population growth and mobility, and these cities no longer seem utopian.

The problem with a city detached from its context – one that is generic, repetitive and built around vehicle traffic – is that it resists adaptation. After all, it was not designed to adapt – it is “visionary”, a fixed solution to an ever-changing problem.

Unfortunately for us, the problem has been changing at an alarming rate. The original “solution” is becoming ever more problematic.

The paradox is that repetitive urban form seems to be the quickest solution for the rapid growth of urban populations globally, unfortunately with dire impacts. Cities are a leading source of carbon emissions that have made them increasingly vulnerable to climatic events, with rising sea levels threatening coastal cities around the world. In some cases, failed cities lie completely abandoned – such as in Spain or China. 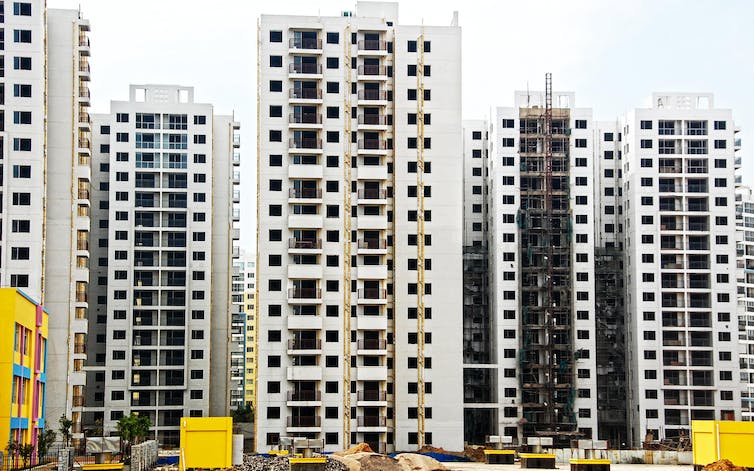 However, some cities – examples include Shibam in Yemen, Fes el Bali in Morocco or the Hutongs in Beijing – have evolved over many centuries as they adapted to changes in their environment and climate. These cities survived in the face of changing conditions. They were built on a model of continuous change.

Unfortunately, changing the built forms and spatial patterns of a city is a slow process. The evolving cities described above managed this by being able to change at a rate that matched changes in local climatic conditions. Today, the pace of global climate change makes it almost impossible for mature cities to adapt.

We need a more sustainable model of urban development.

Read more: What next after 100 Resilient Cities funding ends?

Technological advances in computation and data analysis allow us to create digital simulations of the evolution of cities over centuries. It is now possible to understand the inherent complexity of these systems. We can then replicate the conditions that result in an adaptive city as a whole.

These computational models draw on concepts from the natural world. They learn from how species adapt to their environment and how evolution enables adaptation. The result is urban models based on variation instead of repetition.

Research in this field by the likes of Michael Weinstock, Mike Batty and many others has increased over the past decade. This work builds on the criticisms made by Jacobs and Alexander in the 1960s, but is now supported by advanced technologies and digital simulations.

The stresses on future cities demand an approach that enables them to adjust to rapid change. Up to now, we have designed a city that is geared towards permanent configurations. It’s the opposite of what is required in a world going through radical changes across multiple frontiers.