Belarus’ authoritarian leader, Alexander Lukashenko, has gone to extraordinary measures to cling to power in the face of the stiffest opposition to his rule in 26 years. Last weekend, this included the state-sanctioned hijacking of a passenger plane.

After Ryanair flight 4978 en route from Athens to the Lithuanian capital of Vilnius was forced to land in Belarus, the 26-year-old journalist dissident Roman Protasevich was arrested.

In a move not so far removed from Soviet-era practices, the government’s main security agency had put Protasevich’s name on a list of terrorists last year. He now faces a possible death penalty.

According to Lukashenko’s press service, the president personally ordered a fighter jet to escort the Ryanair plane to Minsk after a purported bomb threat from the Palestinian militant group Hamas. It was a brazen violation of international agreements, but fitting with Lukashenko’s increasingly autocratic and isolationist style of rule. 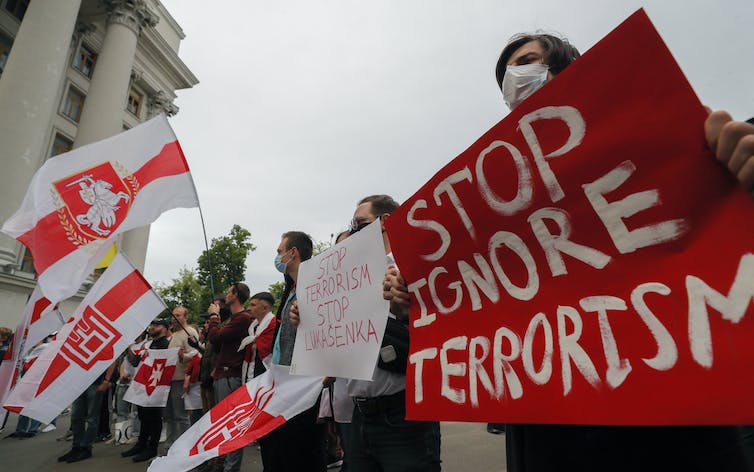 Protests have broken out across Europe, including in Belarus’ neighbour and fellow post-Soviet state, Ukraine. SERGEY DOLZHENKO/EPA

Belarus’ law on the “fight against terrorism”, enacted in 2002, defines terrorism as an

A rather vague definition like this can be malleable in the hands of a dictatorship. Belarus’ laws are designed to vilify and incarcerate the opposition while protecting those in power. Lukashenko’s actions are informed by a sense of survival – even if this is at the expense of global norms and human rights.

Less than a year ago, Lukashenko was declared the winner of a presidential election that was widely regarded to be rigged. A week later, an estimated 200,000 people marched around the country to demand he step down – the largest gathering in Belarus’ history. The government immediately cracked down, arresting many opposition leaders and forcing others to flee abroad. 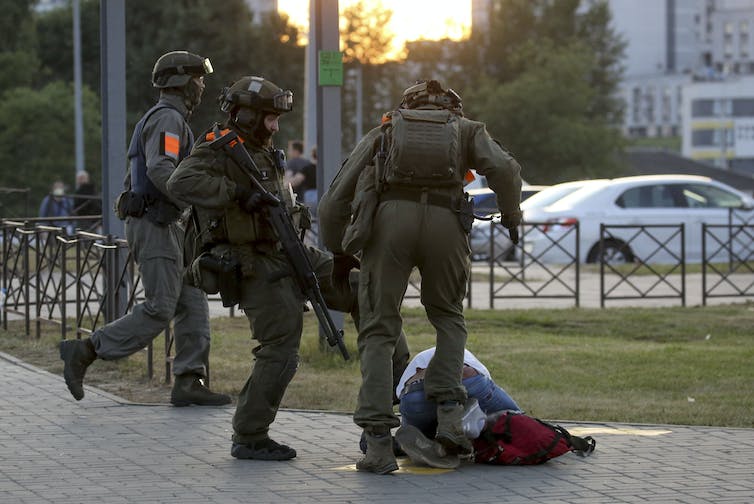 Police officers kick a demonstrator during a mass protest following the presidential election in Minsk. AP

Protasevich helped organise the massive street protests from abroad by using the NEXTA channel on the social media platform Telegram.

The name of the channel comes from the Belarusian word Нехта(Nehta), which translates in English as “someone”. The name refers to the thousands of anonymous tips that were sent to the channel by people within Belarus and then circulated.

The creation of the platform was an attempt to challenge Belarus’ centralised media and foster a sense of free speech among opponents of the government. Even with this precaution, however, the price for challenging the state has proven to be high.

Read more: Belarus: opposition pressure continues inside and outside the country – will it work?

A state built on its Soviet past

Belarus’ independence from the USSR in the early 1990s was not a true break from the Soviet-era mentality of state control. Coming to power in 1994, Lukashenko enacted policies that censored the media and demeaned human rights, consolidating his rule of an authoritarian state.

Unlike other post-Soviet countries, such as the Baltic states, Georgia and Ukraine, which confronted the past and moved away from this style of rule, Lukashenko continued to weave a Soviet narrative of total control and power in Belarus.

Read more: Belarus: Vladimir Putin has Alexander Lukashenko just where he wants him

Political leaders often mobilise national symbolism in order to establish their legitimacy and a national narrative. In Belarus, for example, the Soviet-era flag was restored in 1995 and a controversial referendum gave the Russian language equal status to Belarusian. (Lukashenko is the Russian spelling for the president’s name, for example, while Lukashenka is Belarusian.) Schools and history books were changed to glorify the Soviet past.

By mobilising Soviet and pro-Russian nation-building tactics in this way, Lukashenko has not only legitimised himself in Belarus but also in Russia. He has heavily relied on the backing of Russian President Vladimir Putin to solidify his position, particularly when it comes to financial and military support.

And just as government critics have been increasingly targeted in Russia — including a journalist who was sentenced for allegedly inciting terrorism last year — Protasevich’s arrest shows the lengths that Lukashenko will go to punish any challenge to his rule.

As the protests against the government have failed to create democratic change in the past year and some 30,000 people are believed to have been arrested, this begs the question of whether the opposition has any fight left.

Global pressure will be fruitless

Also, the question remains whether the international community can do anything to punish Belarus.

Until last year’s elections, relations between Belarus and the EU had been on the mend. In 2016, the EU lifted five years of sanctions on Belarus following the release of political prisoners. And less than two years ago, Lukashenko visited Austria in a push for closer ties with the EU.

However, Belarus has long positioned itself as an outsider not only on the basis of its inhumane treatment of the opposition and Belarusian civil society, but as an ally of Russia. As such, new economic pressure from the West will likely prove useless, given Lukashenko predominantly relies on economic support from Russia.

The only tool the EU potentially has at its disposal is severing air links with Belarus, which would further isolate the country from the West.

But Lukashenko has proven to be immune to pressure in the past. And solidifying his power will also benefit the Kremlin, given it allows Russia to hold onto its sphere of hegemonic influence on some post-Soviet spaces. This could be particularly important if it is indeed seeking to take further military action against Ukraine, as some fear.

This is all bad news for Lukashenko’s opponents. Protasevich’s controversial arrest proves the opposition is not safe from the grasp of Belarus’ dictatorship — no matter whether it is on ground or in the air.