The International Olympic Committee (IOC) is adamant the Tokyo Olympics will begin as scheduled on July 23, followed by the Paralympic Games on August 24. Polls indicate the Japanese public is equally adamant that neither event should go ahead.

Public sentiment against the games has recently been accompanied by disquiet from local sponsors. A research institute has also argued that while the cancelling the games would cost Japan ¥1.81 trillion (A$21.3 billion), the economic loss would still be smaller than the costs associated with a nationwide post-Olympics state of emergency.

And Naoto Ueyama, the head of the Japan Doctors Union, has even suggested the Olympics might prompt the mutation of a new COVID variant.

These medical and economic concerns are speculative, but they are nonetheless real.

A number of prefectures in Japan, including those in which Olympics events will take place, remain in a state of emergency, extended now to June 20. And Japan’s vaccination rate is one of the lowest in the developed world, at less than 5%.

Both of the above factors support the wider public’s concern that the risks of hosting the games in July appear too high to continue. 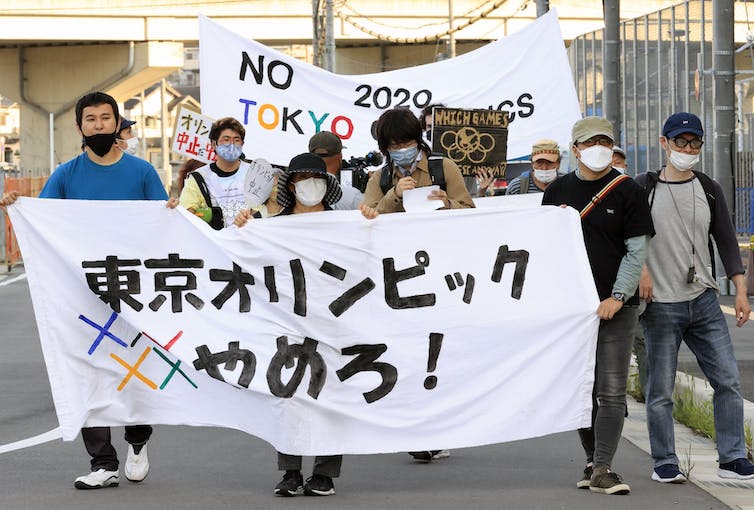 More than 80% of Japanese people oppose hosting the Olympics this year. KYDPL KYODO/AP

And yet, Prime Minister Yoshihide Suga has said the decision to cancel the games lies ultimately and unilaterally with the IOC.

It seems extraordinary that a private entity such as the IOC can wield such influence in a sovereign state faced with a severe public health challenge.

Suga’s comments have been explained by both political rigidity and national pride. But they are also reflective of the language and obligations in the host city contract signed between the IOC and Tokyo in 2013.

This is an extraordinary document. An example of the nature of the power granted to the IOC can be seen in clause 72.

If, over the next few weeks, the Japanese government seeks to pass a law or even a public health regulation, which has adverse consequences for the hosting of the games (and thus adverse commercial consequences for the IOC), this could be considered a breach of contract. And this would justify termination of the contract by the IOC.

Clause 66 contains the full range of powers the IOC has to terminate the contract. If Japan decides in the next few weeks it simply cannot deliver the games, this clause permits the IOC at its sole discretion to simply walk away from the contract.

Under either scenario, Tokyo would not only bear the costs for the preparations to date, but would also remain obliged to indemnify the IOC from any third-party claims, actions or judgements.

Even if the organisers were to invoke the clause in the contract that may allow for a cancellation for unforeseen events or undue hardship — a force majeure-type clause — the IOC is not obliged to consider such a request.

Significantly, the powers granted to the IOC apply not only to a cancellation before the games, but also at any time during the games.

If, for example, the IOC has grounds to believe the safety of participants would be seriously threatened or jeopardised by say, a sudden COVID spike, it can terminate the contract at its sole discretion. Again, the associated costs would largely have to be absorbed by the organisers.

Read more: The Tokyo Olympics are going ahead, but they will be a much compromised and watered-down event

While the games organisers have insured themselves against possible cancellation of the games (as has the IOC), the nature of the losses, insurable or otherwise, must be put in some context.

The budget for Tokyo 2020 was set at A$16.3 billion, but it has since blown out to A$19.9 billion officially, a record for a Summer Olympics. There is some speculation the final spend will be double the original budget.

If the games were to be cancelled, the insurance industry is braced for the largest global event claim in history, estimated at between A$2.5-3.8 billion.

And even with a claim, Tokyo would still stand to be out millions of dollars in capital costs for infrastructure built for the games. 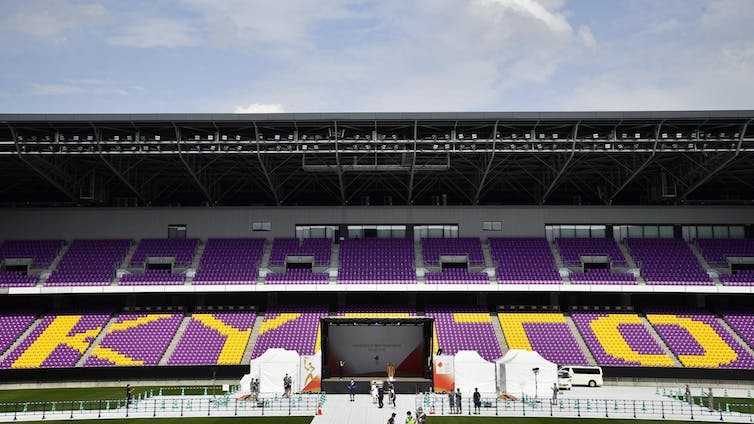 If the games do go ahead, stadiums like this will likely be largely empty. KYDPL KYODO/AP

As the IOC moves into delivery mode now, there are other risks and legal obligations to deliver a safe event and avoid the nightmare of a “superspreader” scenario.

By pressing ahead, the IOC assumes more of the logistical and legal responsibility — or a duty of care — for its safe delivery.

According to the World Players Association, the IOC must do much more to ensure the safety of the athletes. The group’s executive director said,

The IOC and all others responsible for the games have a fundamental duty of care to protect public and athlete health from harm, which means that no expense can be spared. Reports that up to three athletes will be sharing small rooms in poorly ventilated facilities are simply unacceptable.

Harm to athlete and public health must not be collateral damage in staging the world’s largest mega-sporting event.

The IOC, led by its vice president, John Coates, has argued vociferously that its playbook, endorsed by the World Health Organisation, is an operationally, medically and legally sound basis on which to proceed.

The lack of specific logistical details in the playbook, however, has been met with some criticism. Some observers argue there is a risk assessment gap between what the playbook aspires to achieve in advance of games and what can actually be done.

In addition, IOC President Thomas Bach has been asked to provide more specific details on his claim that 80% of athletes will be vaccinated before arriving in Tokyo.

Then there are the matter of the waivers athletes are being asked to sign, which prevent the IOC and Tokyo organisers from being held responsible should an athlete become ill.

The IOC’s playbook says that while every effort will be taken to mitigate the risks involved in participating in the games,

risks and impacts may not be fully eliminated, and therefore you [the athlete] agree to attend the Olympic and Paralympic Games at your own risk.

The IOC has reassured athletes such as clause is “standard practice” for major sports events. That is true, as is generally the case with any waiver or disclaimer that is signed before undertaking an obviously risky sporting activity.

However, it’s important to note that a disclaimer like this has no effect if the reason an athlete becomes ill is due to negligence. The IOC still has a “duty of care” to all athletes taking part in the games.

Put simply, if the IOC does not reasonably comply with the protocols in its own playbook and this causes harm to an athlete, a claim of negligence could follow. 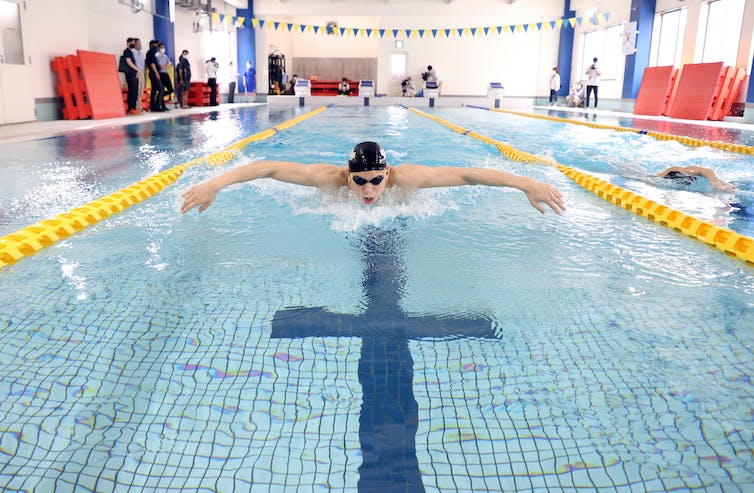 The IOC says the waiver for athletes to sign is ‘standard procedure’ at the games. Ryohei Moriya/AP

Will Japan rally behind the games?

The IOC is of the view that once the games begin, the event will achieve its own momentum and provide a welcome diversion for the Japanese public and the wider world.

And yet, the diversion of medical and logistical resources the games will entail — and the continued opposition of the Japanese public — may yet be the IOC’s greatest opponent. An unwanted games is no games at all.