Sea level rise isn’t the only way climate change will devastate the coast. Our research, published today, found it is also making waves more powerful, particularly in the Southern Hemisphere.

We plotted the trajectory of these stronger waves and found the coasts of South Australia and Western Australia, Pacific and Caribbean Islands, East Indonesia and Japan, and South Africa are already experiencing more powerful waves because of global warming.

This will compound the effects of sea level rise, putting low-lying island nations in the Pacific — such as Tuvalu, Kiribati and the Marshall Islands — in further danger, and changing how we manage coasts worldwide.

But it’s not too late to stop the worst effects — that is, if we drastically and urgently cut greenhouse gas emissions.

Since the 1970s, the ocean has absorbed more than 90% of the heat gained by the planet. This has a range of impacts, including longer and more frequent marine heatwaves, coral bleaching, and providing an energy source for more powerful storms. 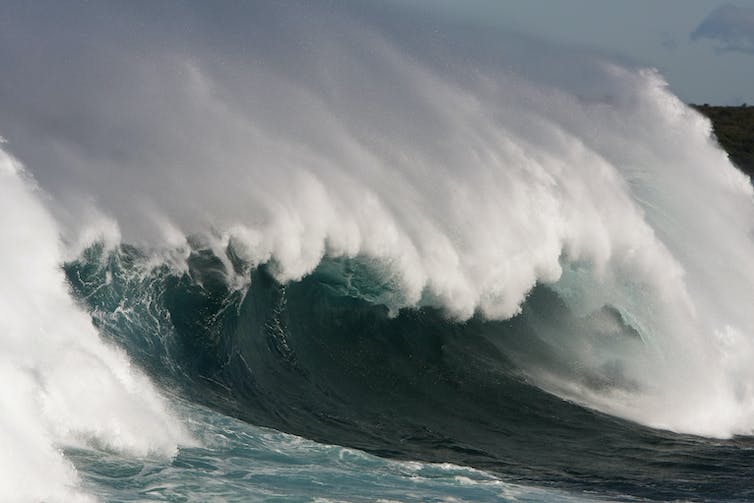 Since at least the 1980s, wave power has increased worldwide as more heat is pumped into the ocean. Shutterstock

But our focus was on how warming oceans boost wave power. We looked at wave conditions over the past 35 years, and found global wave power has increased since at least the 1980s, mostly concentrated in the Southern Hemisphere, as more energy is being pumped into the oceans in the form of heat.

And a more energetic ocean means larger wave heights and more erosive energy potential for coastlines in some parts of the world than before.

Read more: Ocean warming threatens coral reefs and soon could make it harder to restore them

Ocean waves have shaped Earth’s coastlines for millions of years. So any small, sustained changes in waves can have long-term consequences for coastal ecosystems and the people who rely on them.

Mangroves and salt marshes, for example, are particularly vulnerable to increases in wave energy when combined with sea level rise.

To escape, mangroves and marshes naturally migrate to higher ground. But when these ecosystems back onto urban areas, they have nowhere to go and die out. This process is known as “coastal squeeze”.

These ecosystems often provide a natural buffer to wave attack for low-lying coastal areas. So without these fringing ecosystems, the coastal communities behind them will be exposed to more wave energy and, potentially, higher erosion. 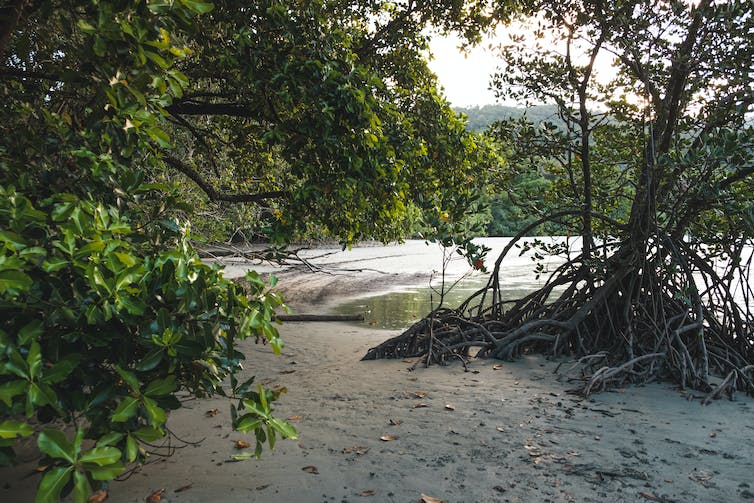 Mangrove forests are among the most imperilled ecosystems as sea levels rise and ocean waves crash harder against the coast. Shutterstock

So why is this happening?

Ocean waves are generated by winds blowing along the ocean surface. And when the ocean absorbs heat, the sea surface warms, encouraging the warm air over the top of it to rise (this is called convection). This helps spin up atmospheric circulation and winds.

In other words, we come to a cascade of impacts: warmer sea surface temperatures bring about stronger winds, which alter global ocean wave conditions.

Read more: Curious Kids: why are there waves?

But not all changes in wave conditions are driven by ocean warming from human-caused climate change. Some areas of the world’s oceans are still more influenced by natural climate variability — such as El Niño and La Niña — than long-term ocean warming. 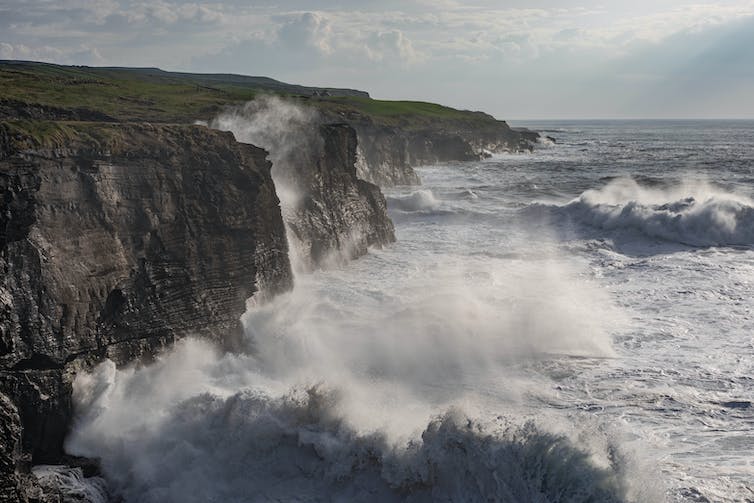 Ocean waves are generated by winds blowing across the ocean surface. Shutterstock

How this could erode the coasts

While the response of coastlines to climate change is a complex interplay of many processes, waves remain the principal driver of change along many of the world’s open, sandy coastlines.

So how might coastlines respond to getting hit by more powerful waves? It generally depends on how much sand there is, and how, exactly, wave power increases.

For example, if there’s an increase in wave height, this may cause increased erosion. But if the waves become longer (a lengthening of the wave period), then this may have the opposite effect, by transporting sand from deeper water to help the coast keep pace with sea level rise. 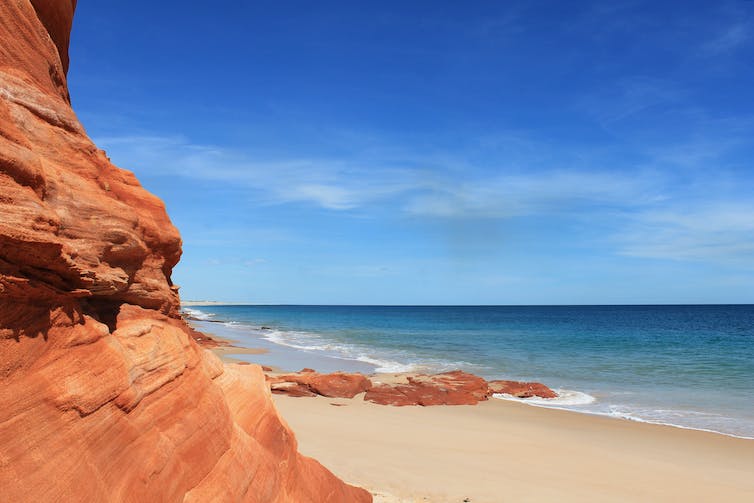 Sandy beaches, including those around South Australia and Western Australia, may see greater risk of erosion in coming decades as wave power increases. Shutterstock

People in these nations may experience both sea level rise and increasing wave power on their coastlines, eroding land further up the beach and damaging property. These areas should be regarded as coastal climate hotspots, where continued adaption or mitigation funding is needed.

It’s not too late

It’s not surprising for us to find the fingerprints of greenhouse warming in ocean waves and, consequentially, along our coastlines. Our study looked only at historical wave conditions and how these are already being impacted by climate change. 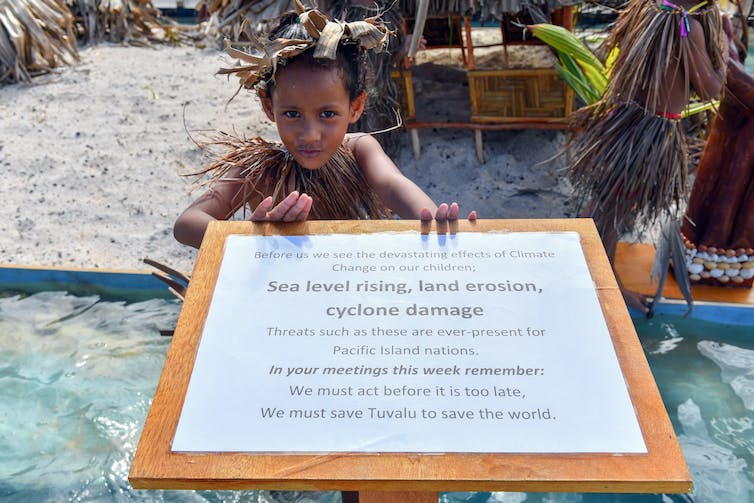 But if warming continues in line with current trends over the coming century, we can expect to see more significant changes in wave conditions along the world’s coasts than uncovered in our backward-looking research.

However, if we can mitigate greenhouse warming in line with the 2℃ Paris agreement, studies indicate we could still keep changes in wave patterns within the bounds of natural climate variability.

Read more: Seabirds are today's canaries in the coal mine – and they're sending us an urgent message

Still, one thing is abundantly clear: the impacts of climate change on waves is not a thing of the future, and is already occurring in large parts of the world’s oceans.

The extent to which these changes continue and the risk this poses to global coastlines will be closely linked to decarbonisation efforts over the coming decades. 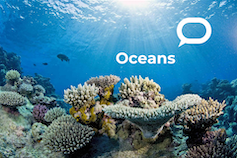 This story is part of Oceans 21 Our series on the global ocean opened with five in depth profiles. Look out for new articles on the state of our oceans in the lead up to the UN’s next climate conference, COP26. The series is brought to you by The Conversation’s international network.