Aboriginal and Torres Strait Islander readers are advised the following article contains the name of someone who has passed. The family of Ningali Lawford-Wolf has given the media permission to use her name.

SandSong opens in scratchy black and white images. An Australian coat of arms, colonial maps of the country deemed “Terra Nullius”, a placard with the text “Stop Black Deaths” flash and flicker against a soundscape echoing the same sense of static and interference.

This is a history centering the disruptions of black bodies by white others.

The screen gives way to a stage with a pile of rocks left of centre. An ethereal female body begins to emerge.

The pile of rocks, undulating human bodies, becomes a boat this woman rows, and the water beneath. Bodily extremities quiver, waterlilies rustling on the surface in response to a gentle morning breeze. The woman and the pile of flesh beneath her move as one, suggesting little difference between body and earth. 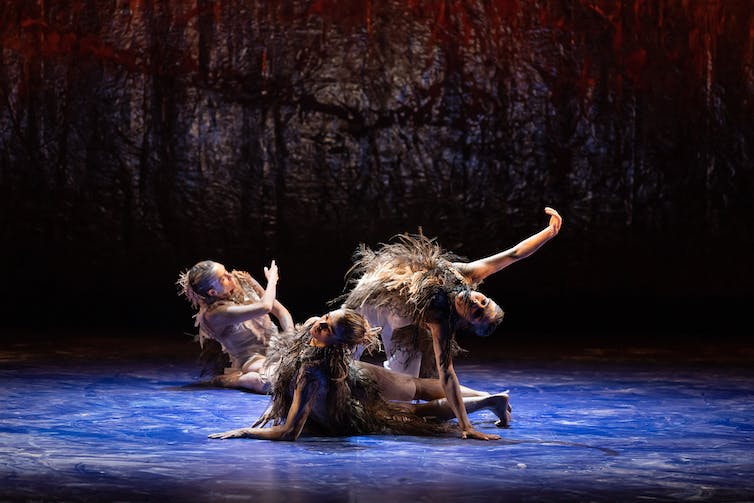 SandSong: Stories of the Great Sandy Desert, is a contemporary Aboriginal Australian ballet. It borrows from traditional dance stories — particularly from the Kimberley regions including Fitzroy Crossing, a community the company visited in May 2021 — and also draws on Bangarra’s signature style of Indigenous contemporary dance with hints of modern dance.

Stephen Page and Frances Rings have exquisitely choreographed a rich, evocative and powerful piece of contemporary dance. Sublime music by Steve Francis is perhaps the most outstanding element of the work with its melodic acoustic instrumentals overlayed with voices speaking in Language.

Movement is at times sinuous, at others, sinewy. The stumps of leafless branches materialise in the repeated image of flexed feet; men wear leaves around their calves and women hold coolomons for preparing onions to eat or digging sticks for finding potatoes in cracked earth.

In the most visceral scene, a mumbling masculine voice spits numbers punctuated by the crackle of a whip. Bodies contort, hands rub skin, torsos collapse sharply, joints twist and writhe. Each person looks poisoned or twitching high and stoned: a derailed existence. It is, without a doubt, an auction. Humans are not poisoned nor are they drugged, but merely expressing the dehumanising horror of slavery. 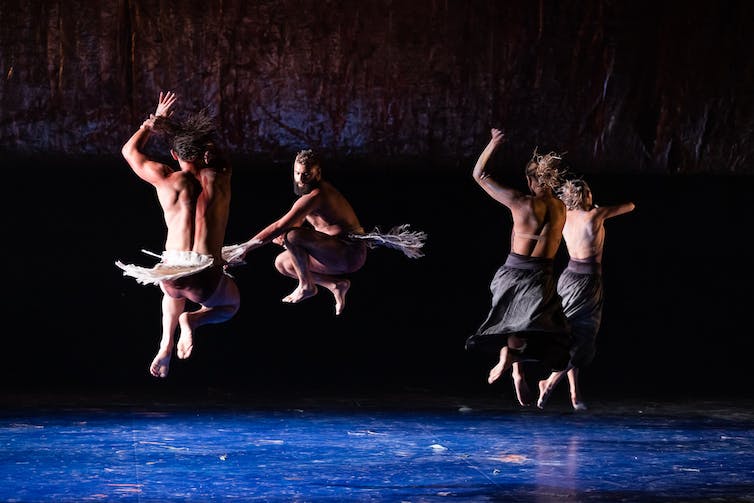 Movement is at times sinuous, at others, sinewy. Daniel Boud/Bangarra

In one scene, after appearing to manufacture baskets on stage, female dancers each wear their basket wrapped around their chests and under one arm, a simple yet beautiful wearable prop (costumes by Jennifer Irwin). The magic of the baskets only appears with movement. As dancers walk, reach and twirl, the baskets morph from a bearer of food, into a baby on their backs and a cage that traps them.

The expressionist movement in this scene, including its strong shapes and spiralling lines, echoes the spirit of Martha Graham and powerfully reinforce the shapeshifter aesthetic so palpable throughout SandSong. 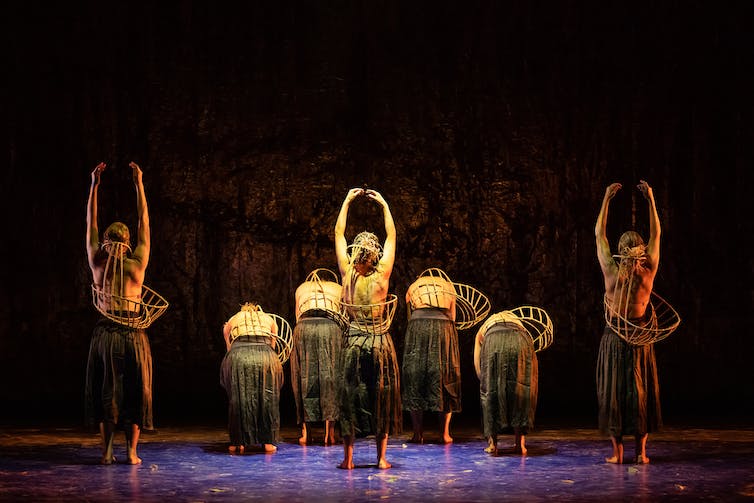 Page and Rings’ new choreography is joined by traditional dances, such as when the male dancers of the company perform Marjarrka, a dance belonging to the Lawford, Tighe, Cox and James families.

Each man enters the stage and stomps his feet into the ground, causing his shoulders to shake. The men all perform the routine slightly differently. Some skip onto stage. Others walk. Some bend low. Others gaze steadily ahead. Others again step to a different beat. The dance is about dispossession — a recovered totem previously stolen: recreating the original choreography gesture for gesture, exactly as it was originally performed, in order to continue telling the truth.

Read more: Firestarter review — Bangarra's story is a film of national and personal tragedies, with light in the dark

A similar meditation occurs when the lithe, young female dancers transform into older women with slower movement performing Junta, a traditional bush onion dance. Their careful embodiment of the dance is transcendent.

Past intertwining with present

There is a discursive power in paying attention to moving Black bodies on stage at the prestigious Sydney Opera House. Bodies resist (protest), expend effort (dance) and remain present (survive). On stage, they demand our focus.

It is also a tribute to the Wangkatjungka and Walmajarri people of the Kimberley. In particular, the work honours Wangkatjungka woman Ningali Josephine Lawford-Wolf, an artist and a friend of Bangarra. Ningali (as she is endearingly referred to) wished to collaborate on this work, but passed away suddenly in 2019. 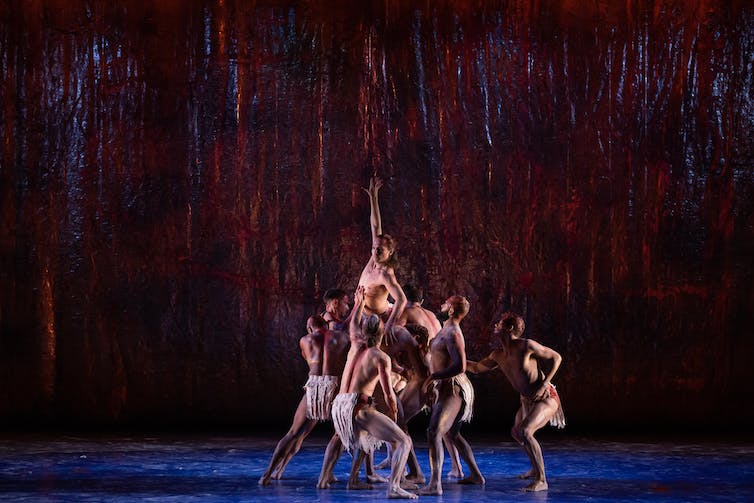 SandSong is a vivid exploration of histories past and lives present. Daniel Boud/Bangarra

Composer Francis excavated old tapes with Ningali speaking and singing, and used these tapes to create “playable instruments from her hums and […] new songs using her voice”.

The result is poignant, reminding us to dig up the past, see what finds you and apply the lessons to your present.

After skin is smeared in gold — a metaphor for the value of water in the desert after rainfall — the work finds redemption for the people of the Kimberley. A backdrop reminiscent of crinkled foil (set design by Jacob Nash) reflects the warm light and conjures the cloudy mist of a new dawn. A lone woman lies down to a voiceover reciting a poem that ends with the words: “You belong to Country. You belong to Country”.

SandSong is at the Sydney Opera House until July 10, then touring to Canberra, Bendigo, Brisbane and Melbourne.