China’s aggressive stands and the sharp deterioration of the bilateral relationship are flowing through strongly to produce record negativity by Australians towards our biggest trading partner.

The Lowy Institute’s annual poll for the first time finds most Australians (52%) see “a military conflict between the United States and China over Taiwan” as a critical threat. This is 17 points up on just a year before.

More than half (56%) think Australia-China relations pose a critical threat.

The poll, “Understanding Australian attitudes to the world”, was done in the second half of March with a sample of 2222. The report is authored by Natasha Kassam. The results on climate and COVID have already been published.

China-Australia relations have plummeted in recent years, with obstacles currently in place against a range of Australian exports, frequent denunciations of Australia by China, and its government’s continued refusal to return Australian ministers’ calls.

Since the poll was taken, the bilateral relationship has worsened; Scott Morrison at the G7 emphasised the challenge China presented and rallied support for resisting its economic coercion.

Trust in China has continued “its steep decline” according to the poll, reaching a new low. Only 16% of Australians trust China to act responsibly in the world, a 7-point decline from last year. As recently as 2018, 52% trusted China. 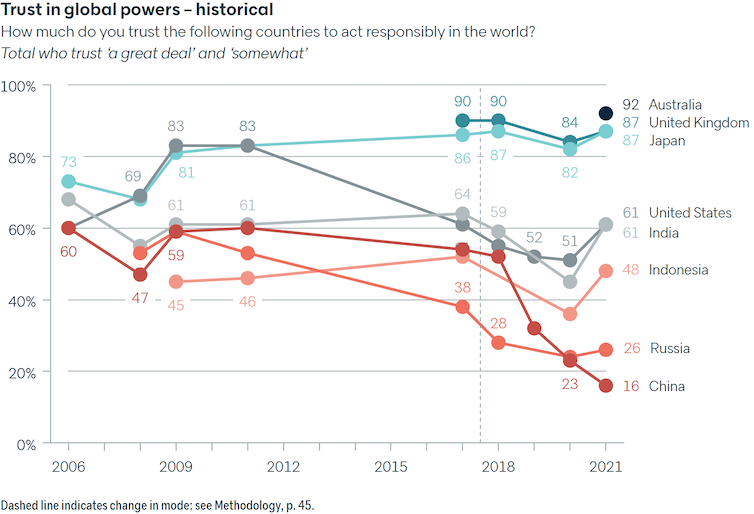 Lowy Institute Just 10% of Australians have confidence in China’s president Xi Jinping to “do the right thing regarding world affairs”. This has halved since 2020 (22%) and fallen 33 points since 2018. While people were critical of China on almost everything they were asked about in the poll, a majority do not want Australia dragged into a military conflict between China and the United States – 57% say Australia should remain neutral in such a conflict, well above the 41% who believe Australia should support the US. There is a big age difference on this question: only 21% of those aged 18-29 say Australia should support the US in a conflict, but 58% of those over 60 believe it should. In one small sign of optimism about China, 72% say it is possible for Australia to have good relations with both the US and China – although this is 15 points lower than in 2013. China has fallen to the bottom of the Lowy Institute’s “feelings thermometer”, with a 7-point drop to 32 degrees – a 26 degree decline from 2018. This compares, for instance, with the rating of India (56 degrees), Indonesia (55 degrees), and the US (62 degrees), Asked whether China is more of an economic partner to Australia or a security threat, more than six in ten (63%) see China as “more of a security threat” - a 22-point rise from last year. In contrast, only a third (34%) say China is “more of an economic partner to Australia”. This is 21 points lower than last year. 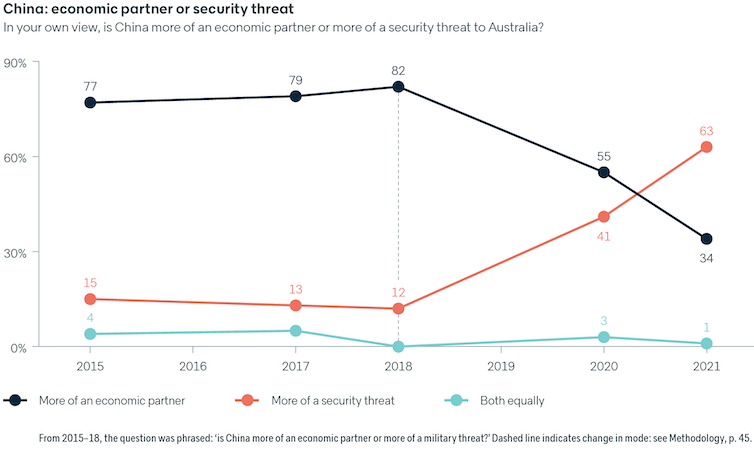 Lowy Institute Some 56% believe China is more to blame than Australia for the bilateral tensions, although 38% attribute blame equally. Having an increasingly negative influence on views of China are its investment in Australia (79%), its environmental policies (79%), its system of government (92%) and its military activity in the region (93%). 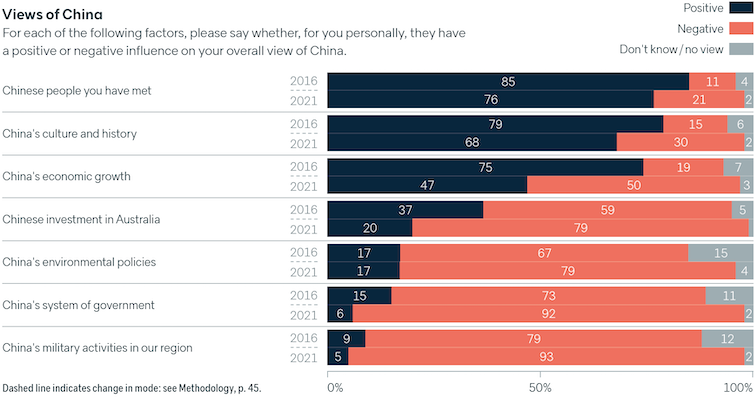 Lowy Institute “Even in relation to China’s strong economic growth story, Australian attitudes have shifted significantly in recent years’, the Lowy report says. "In 2021, less than half the population (47%) say China’s economic growth has a positive influence on their view of China, a steep 28-point fall since 2016” The replacement of US president Donald Trump by Joe Biden has been wholeheartedly welcomed by Australians, the poll shows. Some 69% have confidence in Biden to do the right thing regarding world affairs, 39 points higher than Australians’ confidence in Trump last year. More than six in ten (61%) now trust the US, 10 points higher than last year, but 22 points lower than reached in Barack Obama’s presidency. There is strong support for the importance of the US alliance (78%), steady since last year) and confidence America would come to Australia’s defence if it were under threat (75%). Commenting on the poll results, Kassam said “Australia’s China story has changed dramatically since 2018, from one of economic opportunity to concerns about foreign interference and human rights. "Views of China are to some extent inseparable from the crackdown in Hong Kong, the detention of Uighurs, the disappearance of Australian citizens in China…” she said. “A year of targeted economic coercion has clearly left its mark on the Australian public, and in a remarkable shift, now even China’s economic growth is seen as a negative. It would also appear that the uptick in China’s military incursions in the Taiwan Strait has not gone unnoticed by the Australian public, though the majority would still prefer to avoid a conflict between the superpowers.” Read more: Chinese-Australians have a sense of dual 'belonging': Lowy poll