The Principality of Hutt River is on the market. For 50 years, the sprawling 6,100 hectare property, more than 500 kilometers from Perth, styled itself as the “second-largest country in Australia”.

It was formed in 1970 by Leonard Casley (Prince Leonard), who seceded from Australia following a dispute with the state government over wheat production quotas. Casley died in 2019 and in August 2020, his son, Prince Graeme announced he would sell the family farm to pay a A$3 million tax bill.

Despite the demise of Hutt River, many micronations continue to exist. During research for an upcoming book on micronations, I have identified at least 135 around the world.

Australia has a particular reputation for this phenomenon. Some estimates suggest a third of all micronations are located in Australia.

Why pretend to be a country? 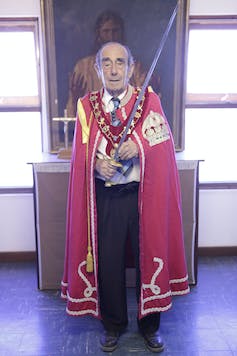 However, despite acting like a nation, micronations are not actual states. They are self-declared nations that mimic acts of sovereignty.

People decide to create their own micronation for many reasons.

Sometimes, it is an attempt to avoid the ordinary laws of the land — like in Hutt River.

The Principality of Wy (Mosman, North Sydney) was established after the local council rejected an application to build a driveway.

Micronations may also be formed to protest government policy or legislation. In 2004, Dale Anderson sailed to the uninhabited island of Cato east of the Great Barrier Reef. He planted a flag and announced the formation of the Gay and Lesbian Kingdom of the Coral Sea Islands to protest the passage of Australian legislation banning same-sex marriage. In 2017, Emperor Dale dissolved the kingdom following the legalisation of same-sex marriage in Australia. 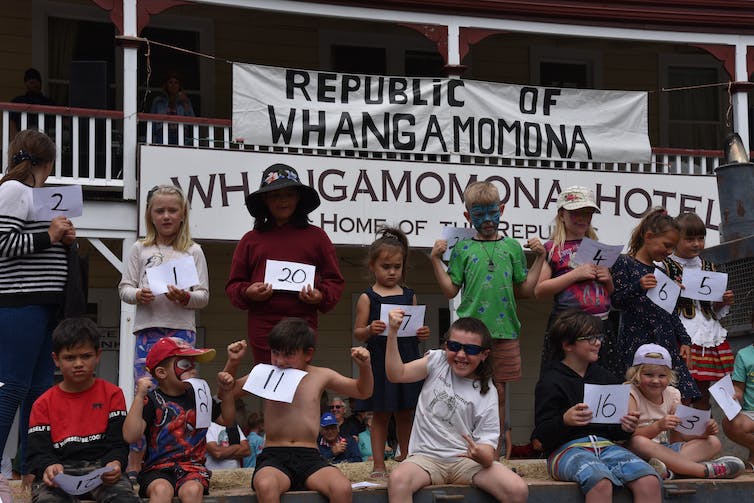 Annual celebrations took place this January at the Republic of Whangamōmona. Ben McKay/AAP

Not all micronations are so serious. The Republic of Whangamōmona on the North Island of New Zealand emerged when regional council boundaries were changed. Upset about the potential of having to play rugby for their neighbours, the residents decided to secede. Republic Day is now celebrated every second January, attracting thousands of tourists.

Micronations might also be used as a vehicle to critique the concept of statehood. The Kingdom of Elgaland & Vargaland, created by two Swedish artists, claims sovereignty over the areas between the borders of countries. It also asserts authority over other intervals, such as the transition from being asleep to wakefulness.

Why are there so many Australian micronations?

Three reasons explain why Australia is known as “micronation central”.

First, the act of seceding from the state and declaring one’s own country is consistent with an Australian culture that celebrates larrikinism and mocking authority. What better way to exemplify these traits than by founding your own country? As His Imperial Majesty George II of Atlantium notes, micronationalism in Australia stems “from our convict heritage and disrespect for authority”.

Second, Australia is a secure and stable country. For this reason, it sees micronations as irrelevant or a nuisance, rather than a genuine threat. So long as you pay your taxes and follow the road rules, you can call yourself whatever you want.

Third, Australia is a large country with a relatively small population — its population density is just three people per square kilometre. This ranks Australia 192 out of 194 countries in the world for population density, ahead only of Namibia and Mongolia. There is plenty of room for people to create their own country.

If you are interested in avoiding the law, the answer is no. The Principality of Hutt River was never able to convince an Australian court it did not have to pay tax. As Justice Rene Le Miere of the WA Supreme Court noted in 2017,

Anyone can declare themselves a sovereign in their own home but they cannot ignore the laws of Australia or not pay tax.

Other would-be nation builders have faced similar challenges. The Republic of Minerva’s attempt to build a new state on a coral atoll in the South Pacific in the 1970s was ended by the Tongan military.

The nations of Abalonia and Taluga (located off the coast of San Diego) were both put down by the US Department of the Interior. The Republic of Liberland, which claims an uninhabited island on the Danube River between Croatia and Serbia, is unable to get its citizens across the Croatian border.

must possess a government or system of government in general control of its territory, to the exclusion of other entities not claiming through or under it.

Prince Leonard may have been the lawful owner of his wheat farm, but he did not possess sovereignty over that land. Micronations may declare their independence, but they are unable to do so to the exclusion of other states.

What makes a successful micronation?

However, success should be measured against a range of motivations.

Artistic micronations, like the Kingdom of Elgaland & Vargaland, can raise challenging questions about the nature of statehood and borders. Those created for a laugh or for tourism can also succeed. 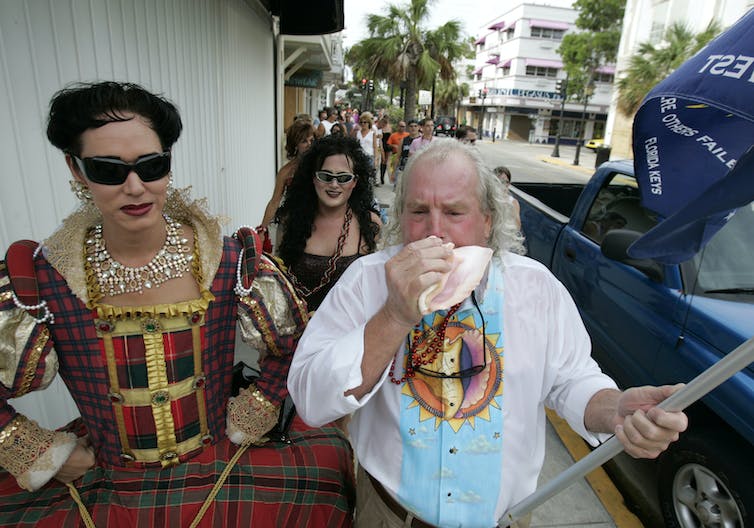 Peter Anderson, the former secretary general of the Conch Republic, during a 2005 pub crawl. Lynne Sladky/AP/AAP

The small township of Whangamōmona welcomed about 1,000 visitors to its Republic Day in January of this year. Next year, the Conch Republic in Key West Florida will celebrate its 40th annual independence celebration.

The success of micronations can also be seen in the growth of community events and social media. Every two years, micronations from around the world meet at MicroCon. Many others discuss, compare notes and become friends online.

So while Hutt River may have ended, the future of micronationalism is bright.