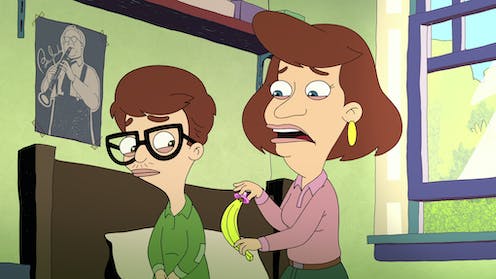 Animation and character design allow us to hold a mirror up to society. We get to see humanity, warts and all, and understand the complexity of what it means to be human. But this reflection of ourselves ties back to a very old artform: the ideas of masking our real selves in the festivity of the Roman Catholic concept of Carnival.

Through the use of carnival, Big Mouth tells complex stories about what it means to be a teenager with a monster-verse of shoulder angels. Shoulder angels (or representations of our conscience) have traditionally been a small angel or devil, representing good or bad.

Big Mouth draws on a rich history of adult animation while also making the genre entirely its own.

Disarming the viewer through play

Animation allows us to disassociate from reality and create a visual dimension to explore ideas: the drawings act as a mask through which viewers engage in a form of role playing, hidden identity and a sense of play.

Masks have been an important part of many cultures from the Tengu Matsuri mask, Junkanoo masks, Dinagyang masks, Dia de los Muertos masks, Venetian carnival masks, to the masks of the Hindu Gods.

Carnival was traditionally a Christian celebration in the last three days before Lent, where the sumptuary laws – the restraint on consumption and luxury – were suspended. During this time, people could wear a mask and break from the conventional rules of society, their identity, hierarchies and become other-than-self.

Like the Carnival, the Russian philosopher Mikhail Bakhtin’s notion of Carnivalesque is a literary device used to assist people in unshackling themselves: using a mask to explore the complexities of experience without consequence.

In animated form, Carnivalesque utilises four techniques: laughter, bodily excess, Billingsgate (or vitriolic language) and inversions of normal social roles. Big Mouth employs a range of these elements in the character design and dialogue to engage the audience in social commentary.

From family fare to adult sitcoms

The animated sitcom has been evolving since the middle of the last century, and with it questions of what is “appropriate” for viewers. Betty Boop first appeared in 1930s. Drawing influences from burlesque, the lewd nature of the show was highly criticised. Soon, censorship would play an important role in limiting sexually suggestive content.

From 1934 to 1968, animation was self-censored by the Hays Code: a set of guidelines preventing profanity, suggestive nudity, excessive violence and sexual content. This gave rise to the closed morality tale built around the nuclear family and patriarchal structure presented in The Flinstones (1960-66) and the The Jetsons (1962-63).

Cartoons of the 1960s were family-friendly morality tales. IMDB

In 1989, The Simpsons moved animated content into the adult frame, each episode dealing with a particular cultural and moral issue.

With the advent of cable television, cartoons could move even more firmly into the adult realm. We saw the rise of absurdity in Beavis and Butt-head (1993-2011) and Family Guy (1999-) and the introduction of crude language and sexual innuendo in South Park (1997-). 2001 saw the launch of US cable network Adult Swim, with its suite of adult-focused content.

Even in this age, Big Mouth is not without its critics. It is often vulgar and has been criticised for sexualising puberty too much. Critics have asked: has it gone too far? Is this really how these issues should be explored?

Read more: The gods of ancient Egypt as seen through 'BoJack Horseman'

At the heart of good animation is character design, with strong characters translating the human experience – goals, mannerisms, habits and worldviews – into moving abstract versions of ourselves. Animation manipulates the character to give a drawing life. We view the characters in the carnival as if they could be our experiences.

Maury and Connie are “Hormone Monsters”, who become the internal conversation around the rushes of chemicals influencing teen decisions. Tito the Anxiety Mosquito and Depression Kitty introduce the way mental illness can feel and operate. Gratitoad and other characters explore the positivity we experience together, and eats anxiety. Pam the Sex Pillow and the Shame Wizard present ways we feel in response to other people.

In the new fifth season we are introduced to Lovebugs and Hateworms. All of these characters help communicate the relationship we have with our experiences.

Big Mouth creator Nick Kroll has described how using animation allows them to tell stories which they “might not be able to discuss” in live action shows starring actual teens or tweens. A character like a hormone monster or shame wizard, he says:

gives us a lot of latitude to have these more complicated discussions and delve into the subjects kids are dealing with.

Growing up is never easy, but visualising complex ideas can enhance our shared experience. Watching a coming-of-age show as an adult allows us to reflect and better communicate the complex experience of puberty.