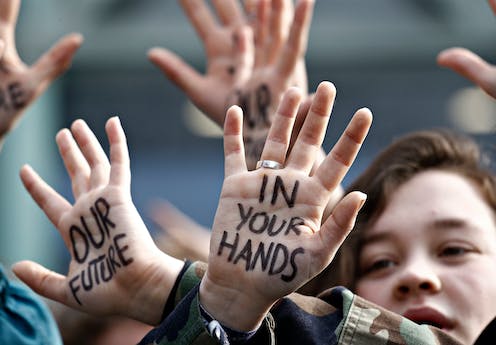 There is a pressing need to prepare for the impact of the climate crisis on schools and school education in Australia. A Western Australian parliamentary inquiry into the response of the state’s schools to climate change reflects this need. It is investigating current and potential mitigation and adaptation strategies undertaken in schools.

The inquiry seeks to prepare for the impacts of a heating planet on the infrastructure and provision of school education. It is investigating the actions, benefits and barriers to climate change responses in schools. But, oddly, its terms of reference exclude curriculum.

Curriculum is the bread and butter of schooling. And research shows it’s an effective means to reduce and adapt to climate change impacts.

When it comes to climate change, however, curriculum is a battleground. It may not be as visible as the student climate protests, but it is a crucial sphere in which the future of the world is understood, imagined and created. For educators, what they do, what they teach and the possibilities they imagine often start and end with the curriculum.

Yet, in Australia, there is no substantive national climate change education or curriculum.

Read more: Ever wondered what our curriculum teaches kids about climate change? The answer is 'not much'

Why does the curriculum neglect climate change?

The 2008 Melbourne Declaration on Educational Goals for Young Australians, made by all the nation’s education ministers, referred to climate change and the embedding of sustainability across the curriculum. But under the stewardship of the federal education minister, these references were removed when the declaration was updated and agreed to by the ministers in 2019. We have also seen the withdrawal of federal funding and support for school sustainability initiatives and national action plans over the past decade.

The piecemeal curriculum approach to climate change has left schools and teachers to “fend for themselves” if they want to teach climate change.

Read more: Children deserve answers to their questions about climate change. Here's how universities can help

The lack of national vision and strategy reflects the federal government’s failure to lead responses that match the scale of the climate crisis. It bodes poorly for achieving a national approach to climate change education.

While the states have constitutional responsibility for school education, reforms over the past two decades have only strengthened the federal government’s influence over education. This includes influence over the national curriculum, which it has not hesitated to exercise.

Schools can make a difference

With the federal government at odds with states that wish to pursue ambitious climate change agendas, or simply to make climate change an educational priority, those states must go it alone. The Victorian government, for instance, is consulting on its Education and Training Climate Change Adaptation Plan 2022-2026. It seeks to embed a climate-change lens in decision-making across the many facets of its education sector, including curriculum.

The education policy architecture created over the past two decades is meant to serve the national interest. When it comes to climate change education, the absence of the federal government in this sphere is glaring.

There is still cause for modest hope that schools are getting it right when it comes to climate change. However, the response of Australia’s school system to the climate crisis is like that of other systems around the world: diffuse and fragmented. Thus, schools are largely “unexploited as a strategic resource to mitigate and adapt to climate change”.

Onus is on the states to act

Perhaps, then, the states need to better assert their constitutional rights over schooling. They could use the national policymaking architecture to create and administer an ambitious national response to climate change that includes curriculum.

Australian schools and young people need to be prepared for their climate futures. This means every teacher must be a climate change educator and every school an incubator of informed and empowered citizens.

With a federal government missing in action, state-led responses to climate change, such as the schools inquiry in WA, must be unapologetically ambitious. To do less is to abdicate their constitutional role.

When it comes to climate change education, to repurpose the words of then Labor MP Gordon Bryant in a 1958 parliamentary debate over the role of the states, the dead hand of the federal government should not be allowed to strangle the education systems of this country.