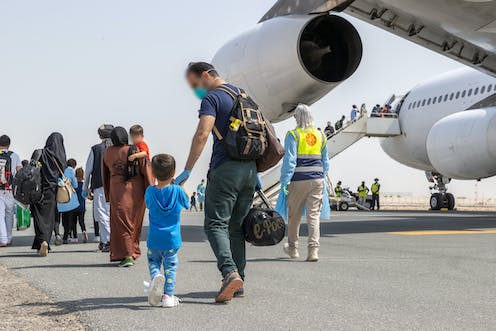 In recent months we have seen images of Afghan people, fleeing their country and seeking refuge in Australia.

But people from Afghanistan have a long history in Australia. From the 1860s to the 1930s, they helped develop the outback with their camels. They also arrived during the Soviet invasion of Afghanistan in the 1970s...

In recent months we have seen images of Afghan people, fleeing their country and seeking refuge in Australia.

But people from Afghanistan have a long history in Australia. From the 1860s to the 1930s, they helped develop the outback with their camels. They also arrived during the Soviet invasion of Afghanistan in the 1970s and 80s, and after 1996, when the Taliban began persecuting ethnic and religious minorities.

As of 2016, there were are about 47,000 Afghanistan-born people in Australia, the majority of whom arrived as refugees.

However, despite the successful integration of some, our research shows other Afghan refugees still face serious challenges in Australia, even after receiving their citizenship.

Our new study focused on former Afghan refugees who are now Australian citizens to understand what integration challenges they still face after becoming citizens.

We surveyed 102 people, interviewed 13 and conducted two focus groups (one for men with eight participants and one for women with five) during 2020 and 2021. Our study was based on the Afghan community in Perth. On average, participants had been living in Australia for more than eight years.

Our survey research suggests respondents are settled in Australia – they want to be here and feel a connection to their new home.

About 87% “definitely” or “most probably” want to live in Australia for the rest of their lives, and only 1.6% wanted to move to Afghanistan if it becomes a peaceful country.

Nearly 90% of those surveyed said they wanted to stay in Australia forever. Royal Australian Navy/AAP

This is not surprising, because the situation in Afghanistan has been unstable over the past four decades. In addition, at the time of our survey, the United States declared it was planning to withdraw its troops from Afghanistan. Therefore, returning home to the country was not a realistic option.

The participants considered safety and stability as the most attractive feature of Australian society.

More than half not satisfied with work

Employment emerged as a major issue for those surveyed. Only 42.5% of Afghan-Australians were satisfied with their current employment, and 17.4% of respondents were either unemployed or doing unpaid voluntary work. This is compared Australia’s overall unemployment rate of less than 5%.

Many participants also faced problems in finding employment in their chosen fields or having their overseas qualifications recognised. As Sadiq, a chemistry graduate and former high school teacher explains:

I have to study eight years if I want to be a teacher [in Australia], but I don’t have time. I have to work and make money to support my family in Afghanistan. That’s why I’m working in construction field now.

Afghan women were over-represented of those unemployed, making up nearly 84% of that group, as well as having lower level of education and higher level of English language barriers, compared to men. Zari, a Hazara woman in her 20s, told us her hijab was severely limiting her employment options.

I haven’t been able to find a job mainly because of my hijab. Even some employers have said this to me directly. My uncle is an owner of a business in Perth, but even he doesn’t hire me for my hijab […] That’s why I have to look for a job only in Afghan community.

Sanam, another female interviewee, does not wear a hijab and describes herself as “modern”. But she nevertheless reported discrimination at work, and being overlooked for promotions.

You are a foreigner in the workplace, no matter how much you try to be similar to them.

‘Where are you from?’

Interviewees also reported being uncomfortable about revealing their identity either as Muslim-Afghan or as former refugees. This was particularly the case in the wake of the September 11 terrorist attacks. As Ali, a 39-year-old participant told us:

At first, people would ask me, ‘where are you from?’ And I would say, ‘Afghanistan’. Then they would say, ‘Oh, Taliban’, or ‘Do you know Osama Bin laden?’ So, I realised that I don’t have to tell them the truth. Since then, whenever somebody asks me where are you from, I say Tajikistan or Uzbekistan.

My younger brother is a [university] student […]. One day I was working with him in a construction project and the man that we were working for asked my brother, ‘What do you study?’ My brother replied, ‘Piloting’. Then the man said,‘Oh. Okay, you plan for hijacking’. It really made me sad […] and I decided not to tell people my nationality anymore.

There has been significant, negative media and political attention on “boat people” since the 1990s. Interviewees reported this has had an impact on public understanding of why refugees come to Australia. Sara is in her 60s and has been living in Australia for over 30 years. She had a pharmacy in Afghanistan in the 1970s, but had to flee as a result of the Soviet invasion.

It’s always been so difficult for me to explain people that we were fleeing from violence. We didn’t leave our country voluntarily, but we had to do that. People here don’t know anything about war […] they just blame refugees for coming to Australia.

Adjusting to a new society is not an easy journey for everyone, particularly for refugees who have been forced to flee violence and trauma.

Read more: We studied Afghan refugees for 3 years to find out what life is like for them in Australia

Since arriving in Australia, our participants have undeniably received support from the Australian government. As citizens, they have the same rights as other Australians and the vast majority regard Australia as home.

However, our study showed how former Afghan refugees continue to face serious challenges. This not only includes fulfilling employment, free from discrimination, but a sense of belonging as well. This suggests that while they are legally Australian citizens, they are not fully accepted in their new home.