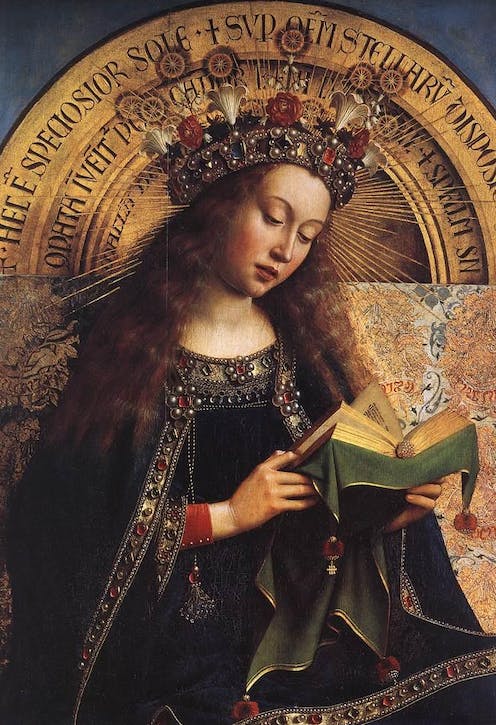 Mary, the mother of Jesus, is unquestionably the senior saint within the Christian tradition. Yet we know remarkably little about her. In the New Testament, there is nothing about her birth, death, appearance or age.

Outside of the accounts of the birth of Jesus that only...

Mary, the mother of Jesus, is unquestionably the senior saint within the Christian tradition. Yet we know remarkably little about her. In the New Testament, there is nothing about her birth, death, appearance or age.

Outside of the accounts of the birth of Jesus that only occur in the gospels of Matthew and Luke, she is specifically mentioned at only three other events in the life of her son.

She is present at a wedding where Jesus turns water into wine; she makes an attempt to see her son while he is teaching; and she is there at his crucifixion. Indeed, Mary is mentioned more often in the Qur'an than in the New Testament.

Here, then, are five things we do know about her.

Read more: In spite of their differences, Jews, Christians and Muslims worship the same God

1. She was an accidental virgin

The gospel of Matthew is the only one to tell us Mary was pregnant before she and Joseph had sex. She was said to be “with child from the Holy Spirit”. In proof of this, Matthew quoted a prophecy from the Old Testament that a “virgin will conceive and bear a son and he will be called Emmanuel”.

Matthew was using the Greek version of the Old Testament. In the Greek Old Testament, the original Hebrew word “almah” had been translated as “parthenos”, thence into the Latin Bible as “virgo” and into English as “virgin”.

Whereas “almah” means only “young woman”, the Greek word “parthenos” means physically “a virgin intacta”. In short, Mary was said to be a virgin because of an accident of translation when “young woman” became “virgin”.

2. She was a perpetual virgin

Within early Christian doctrine, Mary remained a virgin during and after the birth of Jesus. This was perhaps only fitting for someone deemed “the mother of God” or “God-bearer”.

Saint Ambrose of Milan (c.339-97 CE) enthusiastically defended the doctrine of the perpetual virginity of Mary:

Blessed Mary is the gate, whereof it is written that the Lord hath entered in by it, therefore it shall be shut after birth; for as a virgin she both conceived and brought forth.

The Lateran Council of 649 CE, a council held in Rome by the Western Church, later declared it an article of faith that Jesus was conceived “without seed” and that Mary “incorruptibly bore [him], her virginity remaining indestructible even after his birth” . All this in spite of the Gospels’ declaration that Jesus had brothers and sisters (Mark 3.32, Matthew 12.46, Luke 8.19).

Virgin and Child tempera on panel painting by Antonio Veneziano, circa 1380. Museum of Fine Arts Boston

3. She was immaculately conceived

The growing cult of devotion to the Virgin Mary in the medieval period led to fine-grained theological divisions on the issue. On the one hand, devotion to Mary led to the argument that God had ensured Mary did not have “original sin”.

But then, if Mary had been conceived without sin, she had already been redeemed before the redemption brought about by the death and resurrection of Jesus her son.

The Catholic Church only resolved the issue in 1854. Pope Pius IX declared

that the doctrine which holds that the most Blessed Virgin Mary, in the first instance of her conception… was preserved free from all stain of original sin, is a doctrine revealed by God and therefore to be believed firmly and constantly by all the faithful.

4. She ascended into heaven

The early centuries of the Christian tradition were silent on the death of Mary. But by the seventh and eighth centuries, the belief in the bodily ascension of Mary into heaven, had taken a firm hold in both the Western and Eastern Churches.

The Eastern Orthodox Greek Church held to the dormition of Mary. According to this, Mary had a natural death, and her soul was then received by Christ. Her body arose on the third day after her death. She was then taken up bodily into heaven.

For a long time, the Catholic Church was ambiguous on whether Mary rose from the dead after a brief period of repose in death and then ascended into heaven or was “assumed” bodily into heaven before she died.

Belief in the ascension of Mary into heaven became Catholic doctrine in 1950. Pope Pius XII then declared that Mary

was not subject to the law of remaining in the corruption of the grave, and she did not have to wait until the end of time for the redemption of her body.

The Assumption of the Virgin by Luca Giordano, circa 1698. Wikimedia Commons

The consequence of the bodily ascension of Mary was the absence of any bodily relics. Although there was breast milk, tears, hair and nail clippings, her relics were mostly “second order” – garments, rings, veils and shoes.

In the absence of her skeletal remains, her devotees made do with visions – at Lourdes, Guadalupe, Fatima, Medjugorje, and so on. Like the other saints, her pilgrimage sites were places where she could be invoked to ask God to grant the prayers of her devotees.

But she was more than just a saint. In popular devotion she was a sky goddess always dressed in blue. She was the goddess of the moon and the star of the sea (stella maris).

She was the goddess of the moon and the star of the sea. Wikimedia Commons

She was related to the star sign Virgo (not surprisingly) – the Queen of Heaven and Queen of the angels.