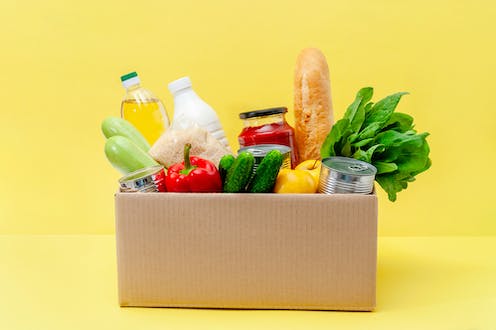 Australia is facing yet another “unprecedented” weather event as extreme flooding across Queensland and New South Wales submerges entire towns.

In the immediate aftermath, there’s a new challenge for many Australians in these flood-ravaged areas. On top of damage to houses, livelihoods and water supply, it’s...

Australia is facing yet another “unprecedented” weather event as extreme flooding across Queensland and New South Wales submerges entire towns.

In the immediate aftermath, there’s a new challenge for many Australians in these flood-ravaged areas. On top of damage to houses, livelihoods and water supply, it’s hard to get food. Stores are running short of fresh food. Major supermarkets have been forced to introduce buying limits on some foods.

Empty supermarket shelves and temporary food shortages are becoming more common in Australia, due to disruptions in food supply related to the COVID-19 pandemic and extreme weather events.

Australia can expect to see extreme weather and disasters such as floods, heatwaves, bushfires and droughts become more common and worse, according to the latest report from the global authority, the Intergovernmental Panel on Climate Change. That means food supplies will become disrupted more often and food will cost more.

At present, our governments largely rely on the food industry to ensure our supply chains are resilient to these threats. Governments also rely on charities to feed people who are going hungry after disasters.

As climate threats intensify, these responses are not enough. We need government to take the lead.

Climate and pandemic shocks pose real challenges across the food system, from production to transport to consumption. Just in the past few days, floods have washed away or ruined vegetable crops in low lying areas of the Lockyer Valley near Brisbane, a hugely productive horticultural area.

Fresh food has been damaged in warehouses, while the Brisbane Markets had to close due to flood damage.

The Pacific Highway between Sydney and Brisbane is blocked in places, disrupting distribution of food to some supermarkets, while emergency food supplies are being provided to flood-affected residents. Food waste is also likely to increase due to crop losses, delays in food freight and power outages.

Earlier this year, West Australia had food shortages dubbed “the worst in memory” after heavy flooding washed out 300 kilometres of the only railway linking it to the eastern states.

Food supply shocks have the greatest impact on the most vulnerable

Shocks like floods and the pandemic affect a large number of people through temporary food shortages and rising food prices. But the greatest impact is on people already at risk of food insecurity, meaning they may lack regular access to enough safe and nutritious food to lead an active and healthy life.

Rates of food insecurity in Australia are highest among Aboriginal and Torres Strait Islander peoples, asylum seekers, people who are unemployed and low-income households.

During the first 12 months of the pandemic, Australian demand doubled for food relief. More people were pushed into food insecurity, including casual workers who lost jobs, temporary migrant workers and international students.

The numbers of people needing food bank assistance was on the rise long before the pandemic. James Ross/AAP

As of 2021, fully one in six (17%) of Australian adults were severely food insecure and 1.2 million children were estimated to be living in food insecure households.

Even before the pandemic, rates of food insecurity were at worrying levels. Demand for food relief in Australia has risen rapidly over the last decade. This points to more systemic causes, such as low levels of income support.

We must make our food systems resilient

Governments urgently need plans to increase the resilience of food systems to shocks and stresses. At present, governments typically have plans to manage emergency food supplies during a disaster.

That’s no longer enough. What we need is a new focus on building the long-term resilience of our food systems to a range of future shocks related to climate change, pandemic and even geopolitical shifts emerging from Russia’s invasion of Ukraine.

What would this look like? Our new infographic identifies key features of a resilient food system, based on our research on the resilience of Melbourne’s food system.

One feature is diversity in where and how we source our food – global and local, large and small scale, commercial and community enterprises, supermarkets and other food markets.

Our governments need to lead

There’s a common belief Australia is a food secure country simply because we produce and export a lot of food.

But food security is about more than the amount of food we produce. It’s also about ensuring we all have access to nutritious food and ensuring our food supplies are resilient.

Read more: What is food insecurity?

We can no longer rely on the food industry and charities to tackle our rising rates of food insecurity and step in after disasters.

Australian governments need food resilience plans where they lay out their strategies to ensure all Australians will have access to enough nutritious food in a world of increasing shocks to food supplies.

Access to adequate food is a fundamental human right. Our governments have a responsibility to help us to realise this right.