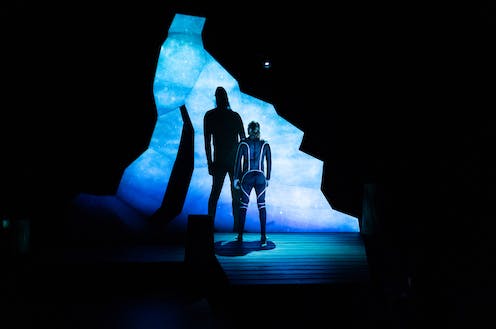 Cathedral could not be more South Australian.

This complex and challenging one-hander is the creation of SA- born playwright Caleb Lewis and brought to life by Nathan O’Keefe, one of our state’s...

Cathedral could not be more South Australian.

This complex and challenging one-hander is the creation of SA- born playwright Caleb Lewis and brought to life by Nathan O’Keefe, one of our state’s acting greats.

The unique and spectacular underwater formations along our state’s Limestone Coast form the backdrop for the story. The play’s title is taken from a beautiful but challenging dive spot southeast of Mount Gambier, a large underwater cavern known as “The Cathedral.”

Lewis’ language describing the coast and its underwater dimensions is sumptuous and arresting, plumbing the depths of geologic time.

The coast he tells us, is “haunted by a billion, billion ghosts […] We are living on their bones.”

Land and sea floor are formed by “the slow sleep of calcium carbonate. Patterns appear "like dishes in the sea,” with “towers rising and falling over the centuries.”

But always, it is “water pushing it down.”

And it is here, in this liquid world, where the play draws its life.

Read more: Naracoorte, where half a million years of biodiversity and climate history are trapped in caves

The opening monologue conflates this underwater world with the womb. O’Keefe, as the protagonist Clay, describes “the first sensation” as “floating, then sound,” then of a heartbeat, followed by drifting.

We infer from his revelation of a “brother who never left the water” he has a twin who was never born.

This is our first hint this play will be about water and loss, with how one lives with losses that never go away.

Clay’s life was marked by loss at a young age when his mother died by suicide, leaving him in the care of his grandfather. It was his crusty old “Pops” who taught him to bodysurf and develop the confidence that led him into deep water diving.

These acts of telling are interspersed with scenes from the past acted out as if in real time. In the first of these, Clay is trapped deep inside the cathedral while diving. He calls in a distress signal on a static-filled connection, struggling to survive on a dwindling supply of oxygen.

Read more: Free divers have long defied science – and we still don't really understand how they go so deep

This realistic depiction of Clay’s struggle is sometimes problematic: there is literally no place to go when acting out states such as disorientation and panic.

More successful temporal shifts are the economically written passages of dialogue between Clay and the colourful offstage characters populating his life.

One such exchange between Clay and his Pops is built around his insistence that he saw his mother’s corpse on a dive. When Clay insists he saw her, Pops tells him he needs to leave the town, and go “anyplace but here.”

Clay subsequently hits the road. On the beaches of Thailand he befriends another salty character, a Scotsman named Jock.

This encounter leads him to a deep sea diving training course in the North Sea. Ever the straight talker, Jock reminds his trainees “down there you’re just a tadpole in the dark.”

‘Down there you’re just a tadpole in the dark.’ Matt Byrne/State Theatre Company South Australia

The life-threatening challenges of such work are powerfully expressed, as are the more light-hearted moments of camaraderie between divers.

In the decompression chamber following deep dives, voices sound like divers have been sucking on helium. As Clay recalls, it’s like being in a “tin can full of tough guys that all sound like Elmo.”

These laugh out loud moments give the audience welcome fleeting escape from the play’s emotional demands.

Lewis does a superb job of capturing the embodied experience of diving, of hovering over landscapes. He captures the feelings of awe and wonder, but equally the residual fear and terror in back of the mind of all divers – even experienced ones.

Facing fear and death is where the play reaches its dramatic, powerful conclusion. We have all been through the ringer these last few years, with fear and loss intruding into many of our lives. Ultimately the play’s greatest strength is its honesty.

Cathedral plays at the Space Theatre, Adelaide Festival Centre until May 21 before touring regional South Australia.