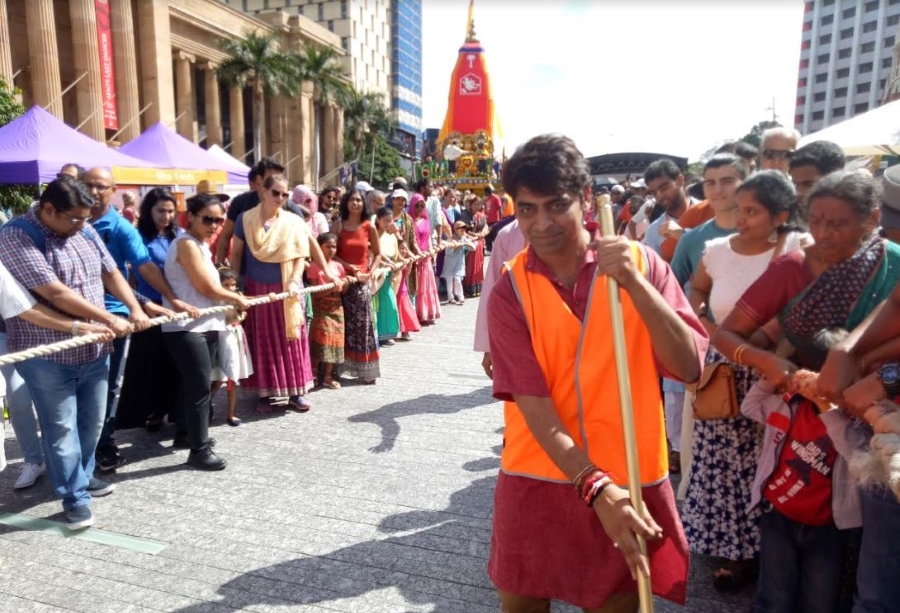 The much lauded annual Hare Krishna Festival of Chariots is expected to set a new attendance record at this year’s event in Brisbane.    Last year the event attracted over 5,000 people and filled the streets of Brisbane city with families, festival goers, and vibrant dancers from all over South East Queensland, bringing with them a sea of colour, spirituality and culture.

This year’s event is being held on Saturday, 11 May from 11am to 4pm and festival organisers are hoping to attract more than 6,000 people.   The 2019 Festival of Chariots will see the Hare Krishna community, accompanied by thousands of celebrating participants parade a giant wooden colourfully decorated chariot through the streets of the city.   The Festival of Chariots, which began in India 5,000 years ago, is a spiritual event that involves pulling giant statues of deities through the city.  It is symbolic of Krishna coming out of his temple to see his people, and the Hare Krishna community will be bringing all of the cultural and spiritual significance, as well as the colour, sound, and excitement, to the Brisbane festival again this year.

Chintan Gandhi, a key member of the organising committee for the Brisbane Festival of Chariots, is passionate about the festival and keen to share the positive impact of the event across Brisbane and the rest of the community.

“The event and the Hare Krishna community in Brisbane play such an important role in so many peoples’ lives.   They have helped me and my family to build an extremely positive life for ourselves here in Australia.   It is a wonderful community that assists many to connect and meet new friends, socialise and help others in need.   I have been volunteering my time as part of the organising committee since 2014.”

Chintan arrived in Australia from Mumbai, India in 2006 as a student.    It was a big step to leave India and take up study in Australia as he not only left his family and friends behind, he also farewelled his rich Indian culture.  Since completing his MBA studies in marketing, he has married and settled down in Australia starting his own family.    Chintan and his family have found great warmth and connection to their Indian culture through involvement in Brisbane’s Hare Krishna community.  It has enabled them to build a strong sense of community in Australia.

“Brisbane is a wonderfully vibrant multicultural city that embraces many festivals such as Buddha’s birthday, Chinese New Year and the Paniyiri festival and it is great to see the Festival of Chariots being embraced as well,” Chintan added.

“We are expecting attendance numbers this year to be our biggest yet.”

The 2019 Brisbane Festival of Chariots will consist of two elements, the chariot parade and a myriad of cultural and participatory events.

Starting in King George Square at 11.30am, everyone will help to pull the giant chariot through the streets of Brisbane accompanied by singing and dancing.

The Festival will then head back to King George Square with the chariot and continue to celebrate until 4.00pm in the afternoon.  There will be stage performances of drama, dance, music and talks, as well as cooking courses and craft tents.  Also on offer are henna, face painting, and delicious free meals from Hare Krishna’s own Govinda’s Vegetarian restaurant for all festival participants.

There will also be cultural and spiritual exhibition tents, showcasing the richness of the Hare Krishna community and the culture they are rooted in.

For Chintan and the rest of the organising committee, the Festival of Chariots is an important way to foster community engagement with other cultures and forms of spirituality.

“The festival is about bringing people together and spending time with family.  We want everyone to have fun pulling the chariot, and we want them to see and experience new and exciting things and enjoy the range of cultural activities on offer,” Chintan added.

“We’re looking forward to having more people come this year than ever before and experiencing the life, colour, and vibrancy of Hare Krishna and Indian culture.

“We get more excited every year!”