While watching my cat engaging in yet another battle with my shoelace, I noticed that he seemed mainly to use his left front paw. Do animals have a more dextrous side that they favour for particular tasks, just like humans? – Mike, Perth.

The short answer is: yes they do! Like humans, many animals tend to use one side of the body more than the other. This innate handedness (or footedness) is called behavioural or motor laterality.

Laterality is an ancient inherited characteristic and is widespread in the animal kingdom, in both vertebrates and invertebrates. Many competing theories (neurological, biological, genetic, ecological, social and environmental) have been proposed to explain how the phenomenon developed, but it remains largely a mystery.

Humans tend to be right-handed. Lefties or “southpaws” make up only about 10% of the human population, and more males than females are left-handed.

Great apes show similar handedness patterns to humans. Most chimps, for instance, seem to be right-handed. But not many studies have looked at laterality in non-primate animals.

Read more: Why are most people right-handed? The answer may be in the mouths of our ancestors.

There is some evidence to suggest that dogs and cats can be right- or left-pawed, although the ratio seems to be more evenly split than in humans, and it is unclear whether there are sex differences.

If you’re a pet owner you can do an experiment for yourself. Which paw does your cat or dog lead with when reaching out for something, or to tap open a pet door?

To test your pet dog, you can place a treat-filled Kong toy directly in front of your dog and see which paw he or she uses to hold it to get the food out. A dog may use either paw or both paws.

To test your pet cat, you can set a “food puzzle” by putting a treat inside a glass jar and watching to see which paw your cat uses. Don’t forget to repeat it lots of times and take notes to see whether the effect is real or just random chance!

Don’t forget to repeat the experiment lots of times.

Horses also seem to prefer to circle in one direction rather than the other. Meanwhile, one study suggests that kangaroos are almost exclusively lefties, although the neural basis for this is unknown.

In humans, the left hemisphere is mainly associated with analytical processes and language and the right hemisphere with orientation, awareness and musical abilities, although this dichotomy is simplistic at best.

Is there evidence of lateralised brain function in non-human animals too? A team of Italian researchers think so. They found that dogs wag their tails to the right when they see something they want to approach, and to the left when confronted with something they would rather avoid. This suggests that, just as for people, the right and left halves of the brain do different jobs in controlling emotions.

Laterality is also connected to the direction in which hair grows (so-called stuctural laterality), or even to the senses (sensory laterality). Many animals use they left eye and left ear (indicating right brain activation) more often than the right ones when investigating objects that are potentially frightening. However, asymmetries in olfactory processing (nostril use) are less well understood. 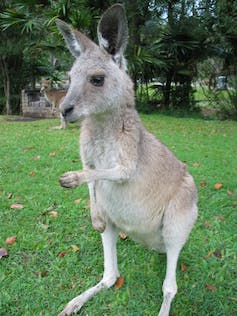 The left or right bias in sensory laterality is separate from that of motor laterality (or handedness). However, some researchers think that side preference is linked to the direction of hair whorls (“cow licks”), which can grow in a clockwise or anticlockwise direction. More right-handed people have a clockwise hair pattern, although it is unclear if this is true of other animals.

The direction of hair growth and handedness are also related to temperament. Left-handed people might be more vulnerable to stress, as are left-pawed dogs and many other animals. In general, many animals, including humans, that have a clockwise hair whorl are less stress-prone than those with anticlockwise hair growth. The position of the hair whorl also matters; cattle and horses with hair whorls directly above the eyes are more typically difficult to handle than those with whorls lower down on the face.

Elsewhere in the animal kingdom, snails also have a form of laterality, despite having a very different nervous system to vertebrates like us. Their shells spiral in either a “right-handed” or “left-handed” direction – a form of physical asymmetry called “chirality”. This chirality is inherited – snails can only mate with matching snails.

Chirality is even seen in plants, depending on the asymmetry of their leaves, and the direction in which they grow.

As an aside, left-handedness has been discriminated against in many cultures for centuries. The Latin word sinistra originally meant “left” but its English descendant “sinister” has taken on meanings of evil or malevolence. The word “right”, meanwhile, connotes correctness, suitability and propriety. Many everyday objects, from scissors to notebooks to can-openers, are designed for right-handed people, and the Latin word for right, dexter, has given us the modern word “dextrous”.

Why is the brain lateralised?

One adaptive advantage of lateralisation is that individuals can perform two tasks at the same time if those tasks are governed by opposite brain hemispheres. Another advantage might be resistance to disease – hand preference in animals is associated with differences in immune function, with right-handed animals mounting a better immune response.

Does it matter if your cat, dog, horse or cow favours one paw (or hoof) over another? Determining laterality – or which side of the brain dominates the other – could change the way domestic animals are bred, raised, trained and used, including predicting which puppies will make the best service dogs, and which racehorses will race better on left- or right-curving tracks.

And even if your dog or cat never clutches a pen, or uses one limb more than the other, just be grateful that they haven’t yet developed opposable thumbs! 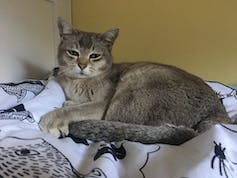 This article is dedicated to the memory of Bollo the cat, who inspired this question but has since passed away.