Smartphones have changed the way we inhabit public space and more specifically, how we fill our time while waiting. Consequently, day-dreaming, thinking, speculating, observing, and people-watching are diminishing arts. So what happens when you put down your phone, look up and start noticing?

Though hotly contested, the social, physical and cognitive effects of our slavish devotion to the smartphone are said to include symptoms and risk factors such as neck problems, limited attention span, interrupted sleep, anti-social behaviour, accidents, and other health risks.

Rarely mentioned in this litany of side effects is how phone use has changed the way we inhabit public space and, more specifically, how we fill our time while waiting. Every moment of potential boredom can now be ameliorated or avoided by all manner of tasks, modes of entertainment or other distractions conveniently provided courtesy of our mini computer and bodily prosthetic.

Some years back, in response to my own smartphone symptoms, I decided to look up from my screen and look around. I set myself the challenge of identifying something that I had never noticed before while waiting in public spaces. The things that first caught my eye were the curvy industrial forms that are ubiquitous in planes, trams and trains. These hallmarks of mass production and homogeneity were so muted in colour and understated in form they had become invisible to me.

By contrast, blasts of colour demanded immediate attention – the rear of the myki travel card reader on a Melbourne tram or a service station roller-door offered an eye-popping colour palette. 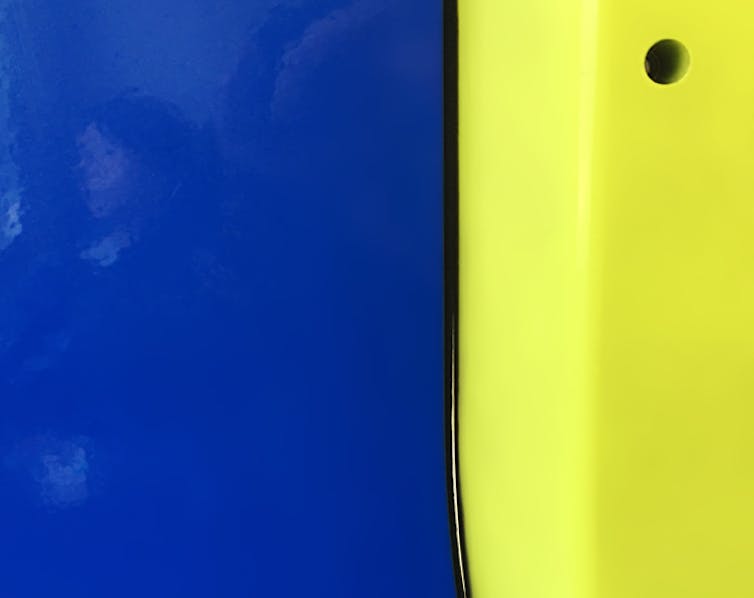 Waiting for people to get on, 2016. Julie Shiels

The experiment was surprisingly fruitful. I went from boredom to engagement with the apparently nondescript places that I was forced to endure while waiting for the plane to take off, the train to arrive or a doctor’s appointment. There were also those in-between moments while I waited for my partner to buy the milk, my dog to pee on a bush or my son to get back into the car. Because I did not allow myself to be distracted, I observed the richness of surface texture and colour.

Ironically, this was so visually engaging, that I was prompted to pull out my phone again and started taking photographs. I tried swapping my phone for a compact digital camera, but more often than not I would leave it at home because it didn’t fit in my pocket. There is an old photographic chestnut that “the best camera is the one you have with you”. The camera I had was in my phone and I gave in to that contradiction. 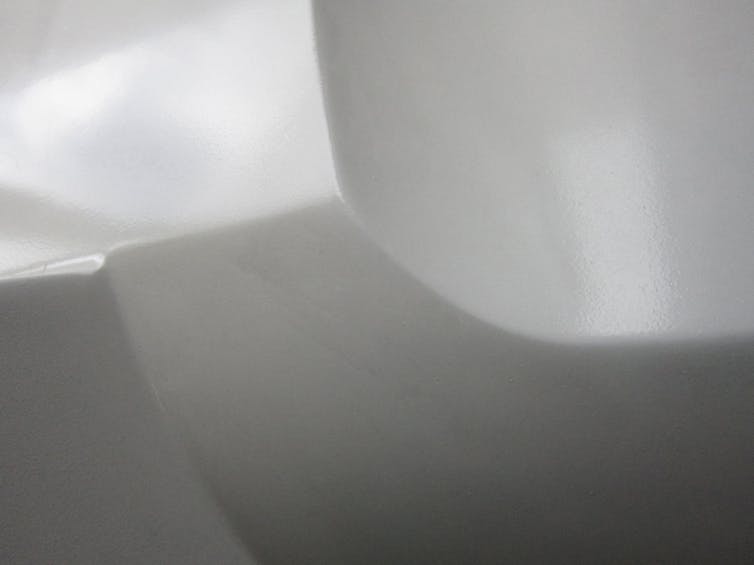 Waiting to get home from work, 2015. Julie Shiels

While each particular subject may be tricky to identify, these images are nonetheless familiar because we are acquainted with the spatial and visual white noise of “non places” that are part of the contemporary global experience.

Writer and anthropologist Marc Auge has coined the term “non places” to refer to spaces formed in relation to certain ends (transport, transit, commerce, leisure). We regularly, stand, lean and sit in these transitory public spaces hunched over our smartphones, as we travel to both material and digital destinations “without experiencing them as places”. 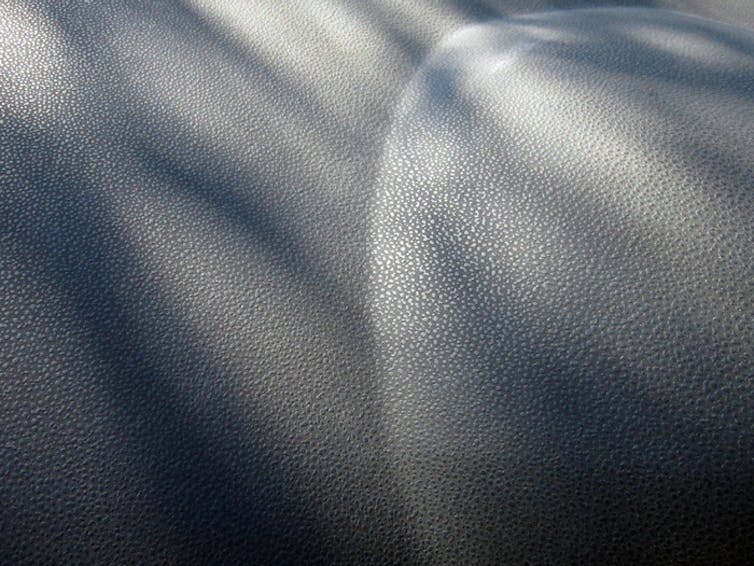 Waiting for Peter to buy the milk, 2014. Julie Shiels

Gradually it became evident to me that a coherent body of work was forming. I became absorbed with the way the light on the dash board of a car transforms the industrially formed pattern into skin, with the cheeky phallic demeanour of the tray on the back of an aeroplane seat and with the capacity of round red poufs in an airport lounge to erotically impersonate a pair of thighs. 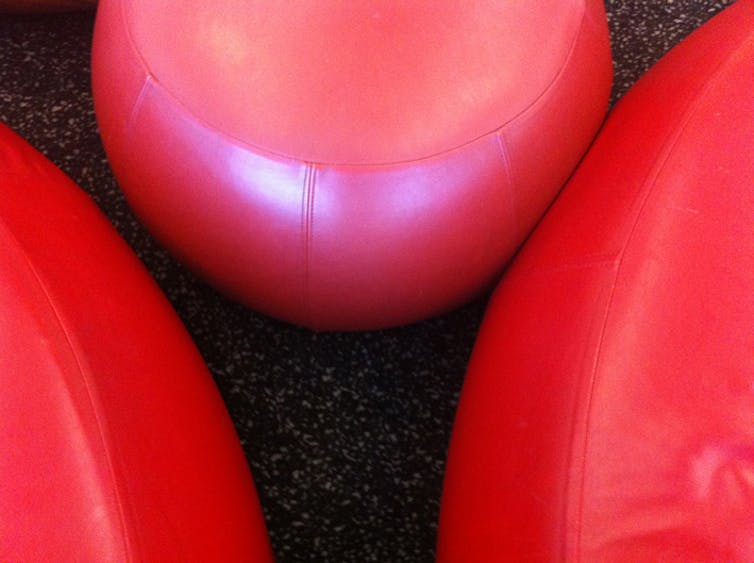 I was constantly surprised at the rich detail and bodily qualities that these zones often exhibited. The paradox in this collection, however, is that the human form was purposely excluded. While I didn’t deliberately seek out bodily forms, the soft humps and crevices regularly caught my eye. Without thinking, I was drawn to the unexpected sensuality of these inert things. Once I noticed this pattern I pursued it more deliberately.

The urge to recognise patterns either consciously or unconsciously is hardwired into the human brain and was a critical skill for survival when creatures stood up and started walking around. The interpretation of patterns provided signals for survival — don’t eat this one, run away from that way and vice versa. 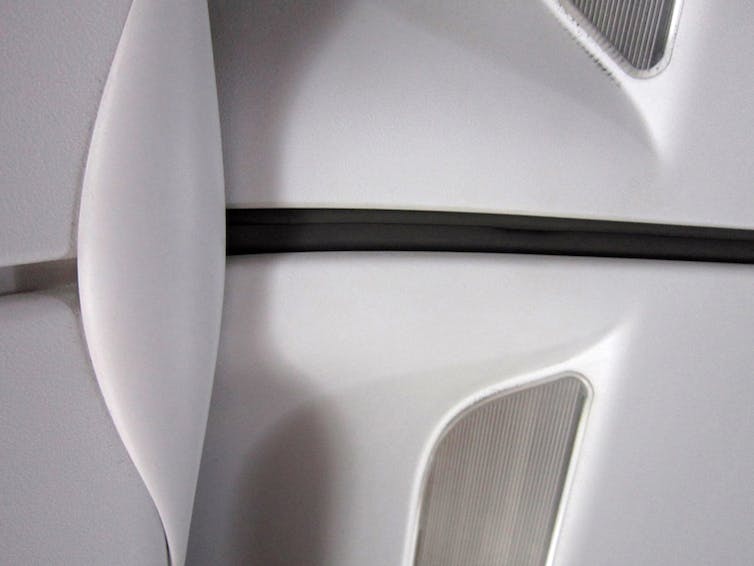 As art historian and writer David Hansen has written:

It is a fundamental human instinct that when two or more things are similar in content, size, form, colour and so forth, we seek to match them together in our minds, to create a visual set or class.

He enlarges on this idea by describing how, once we establish similarities, we then seek out difference. It is through these processes of recognising patterns and differences that we make sense of the world.

Recent psychological studies have expanded our understanding of the creative benefits of being bored. “Boredom becomes a seeking state,” suggests psychologist Heather Lench, because the bored mind is more likely to seek out activities that engage the reward centre of the brain. 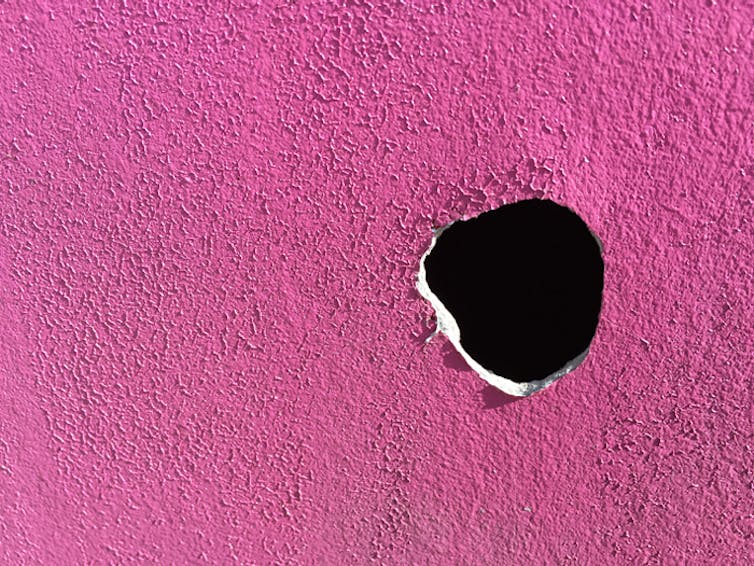 Waiting for my students to finish their projects, 2016. Julie Shiels

We constantly use electronic devices to distract ourselves from the tedium associated with waiting. Instead, we could see boredom as an invitation to look up and then look around, to people watch, daydream, or take the time to observe and develop our own pattern recognition beyond hyperlinks and tags. We may then discover a space where a new poetics resides.