Ding, another text message – this time not from a friend or work, but from the marriage equality campaign. An SSM SMS. 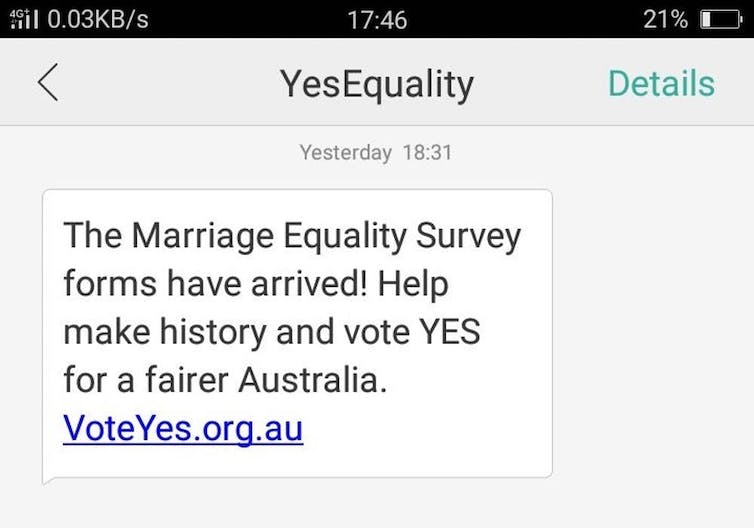 Smile and keep it? Delete it and grumble? Or yawn? Many grumbled publicly, even some who’re voting Yes.

What is the law and protocol of such campaigning? Especially in the febrile atmosphere of the marriage law “plebisurvey”, a platypus of a process that is neither a binding vote nor a normal collection of statistics.

Read more: National poll vs sample survey: how to know what we really think on marriage equality

As we shall see, it is a voluntary survey about a relatively simple social issue that has been done to death. And in the vacuum of genuine debate, some obsess about tactics and – surprise, surprise – the majority turn off from the process.

But first to the law. Only unsolicited commercial e-messages are prohibited by the national Spam Act. Even then, purely factual commercial material (not sales pitches) is allowed, as are political fundraisers or merchandising messages, provided that they are authorised.

Under the Safeguards Act that covers the survey, advocacy material must be authorised. Campaign SMSs need only include a web link to identify their source, in this case voteyes.org.au. (Here, recipients had to drill down two levels to learn that the real source was the Equality Campaign, “a joint initiative of Australian Marriage Equality and Australians for Equality”).

This type of “spampaigning” is nothing new. Parties have long had preferential access to e-copies of the electoral roll, to compile databases about electors’ leanings and mail them directly.

We drown in marketing messages each day. So why would political marketing offend, and why is the SSM debate so wrapped up in issues of process, not substance?

In part, all this is just an extension of the fact that humans are, as Aristotle said, “zoon politikon”: social and political creatures.

When we enrol to vote we are no longer merely individuals shopping for opinions or information. We are fellow citizens, with a public role to play, our franchise to exercise.

On the other hand, we crave privacy even while selling our eyeballs to the Facebooks of the social media world. Marriage equality is a sensitive issue for millions of traditionalists and progressives alike.

The real story here, however, is not the palaver about receiving SMSs. Sure, our relationship with our mobile gadgets is quite intimate, so some people may be miffed at getting advertising via text message and wish the Spam Act was widened.

But that is just to say that SSM is a social issue that arouses some strong feelings. Any crude campaigning on such issues risks alienating some, just as it aims to promote its viewpoint and encourage action.

The latest heat over SMSs will blow over before the next issue over the plebisurvey process blows up. The real curiosity lies in how the substance of SSM appears almost irrelevant to this two-month advocacy period.

There is nothing new to say. The vast majority of us formed an opinion long ago. All that will shift is the salience or strength of the issue for some.

In the vacuum of this elongated and highly strung campaign, political blowhards focus instead on tactics and process. In turn, a content-hungry media happily fans that. Partly this is standard practice for the political caste, for whom process is endlessly fascinating.

But I fear it is also a tactic for the No campaign: generate cynicism, muddy the waters, and deter some lukewarm “yes” leaners from returning their forms. This is a classic example of a tactic used in systems with voluntary voting, like the United States. You can win not by convincing a true majority, but by holding your base and driving down turnout.

Read more: When it comes to same-sex marriage, not all views deserve respect

There are signs that it is working. For more than a year, a significant majority said it wanted to vote on SSM, either to finally resolve the parliamentary impasse, or out of a wider weariness with representative government and a yearning for direct democracy.

Yet this week’s Newspoll found that fewer people today think the plebisurvey is a good idea than a bad one.

We are an ornery mob. Faced with the direct democracy sausage we thought we craved, are we now turning up our noses at it? If so, can we hold our noses for the next few weeks until the final forms are returned on November 7, and the result published by the Australian Bureau of Statistics on November 15.