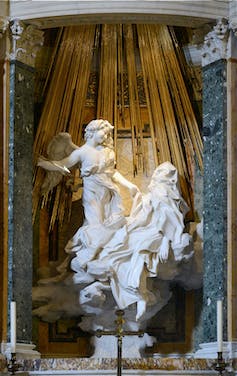 The Ecstasy of St Teresa of Avila (1647-52) by 17th-century Italian sculptor Gian Lorenzo Bernini is one of the most famous images of the Baroque period. Located in the Cornaro Chapel, Church of Santa Maria della Vittoria, Rome, the marble sculpture represents Saint Teresa of Ávila, a Spanish nun canonised in 1622, sprawled on a cloud with an angel. The angel is holding an arrow, about to pierce Teresa’s heart. Writhing and twisting in ecstasy, Teresa’s eyes are closed, with her face turned upwards toward heaven.

Teresa’s ecstasy was drawn from her autobiography, where she described intensely spiritual visions and mystical experiences. It is the departure point for a new exhibition, Ecstasy: Baroque and Beyond, currently on display at the University of Queensland’s Art Museum. Curated by Andrea Bubenik, the exhibition probes ecstatic emotion in its secular, psychological and sexual forms over the centuries.

The visitor is greeted upon arrival by Anastasia Booth’s commanding wall sculpture, Teresa (2016). Booth has appropriated the brass rays that form the backdrop of Bernini’s original marble sculpture. The vertical thrust of the work forces the spectator’s eyes upwards, a poignant reminder of the deeply religious connection between the physical and divine that was the subject of Teresa’s visions. 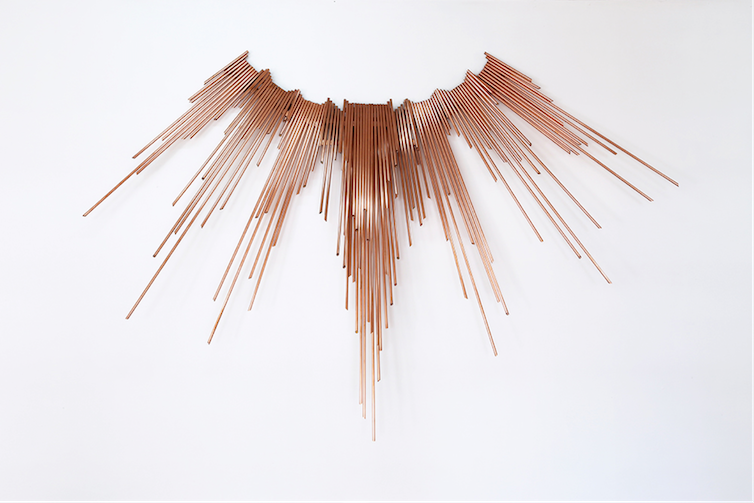 Similar appropriation strategies are at play in Nigel Milsom’s Judo House Part 6 (The White Bird), 2014-15. The figures of Teresa and the angel float against a black background, leaving the viewer to consider the interplay of dark and light, of pleasure and pain. The boundaries between painting and sculpture are challenged as the figures are released from the canvas, giving the illusion of projecting forward into the spectator’s space. Milsom’s painting serves as a potent reminder that Bernini’s sculptural installations were often described by art historians in theatrical terms. They were spaces designed to intensify the visitor’s sensual experience.

One of the themes uniting the exhibition is the performative nature of ecstasy. The extreme physicality of Teresa’s swoon is echoed in Louise Bourgeois’s sculpture Arched Figure (1993). Armless and headless, a single bronze figure on a mattress arches its back in an intense physical posture. It is impossible to read the source of the emotion: is it psychic or sexual? 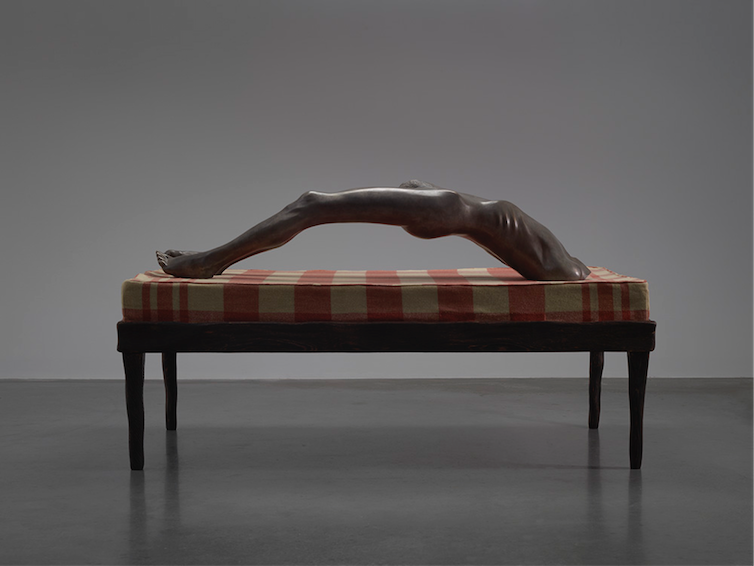 This duality is continued in Salvador Dali’s contribution to the Surrealist journal Minotaur. Dali’s photomontage The Phenomenon of Ecstasy (1933) consists of a series of women’s faces laid out in a grid-like format. Dali’s use of repetition forces the visitor to concentrate on the minute details of the women’s faces in various ecstatic states. 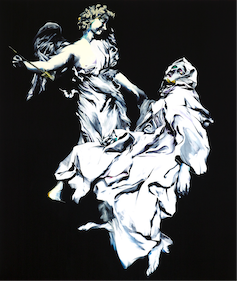 One of the most satisfying aspects of the show is its gentle exploration of the Baroque as an ongoing aesthetic concern. This sentiment was taken up in American artist Gordon Matta-Clark’s Office Baroque (1977). This extraordinary video documented Matta-Clark’s intervention in a derelict Antwerp office building earmarked for demolition. With a nod to the geometrical shape of the oval favoured by Baroque architects, Matta-Clark cut oval voids into walls and floors, opening the building from within and creating new sight lines and vantage positions.

The exhibition is most successful with its unexpected juxtapositions and witty inclusions. In David Wadelton’s Show them you want it (2004) two men stand gazing at the sky, mouths open. Their faces are bathed in a golden glow and both are fixated on an object outside the painting’s frame - a football. The beautiful game of Australian Rules Football is often referred to in quasi-religious terms, with the Melbourne Cricket Ground revered as a cathedral of Australian sport.

David Wadelton, Show them you want it, 2004, oil on canvas. National Gallery of Victoria, Melbourne. Presented by Geoff Slattery Publishing as the winner of The Spirit of Football Acquisitive Prize, 2005 © David Wadelton

Alternatively, if ecstasy is a mode of extreme rapture and euphoria, the spectator is treated to the background hum of German dance music featured in Chis Bennie’s video Mothership (2004). Oblivious to the spectator’s presence, Bennie turns inwards in a trance-like state as he happily dances in his mother’s lounge room.

Bubenik has drawn strong connections between 17th-century Baroque art and contemporary aesthetics. Long maligned in art history for its flamboyant excess after the technical achievements of the Renaissance, the Baroque period has been revisited in recent years. The exhibition reveals that Teresa’s ecstasy lives on in contemporary art, architecture and film.

Ecstasy: Baroque and Beyond is at UQ Art Museum, The University of Queensland until 25 February 2018.