Tooth decay, wonky teeth, yellow teeth. These are all aspects of dental health some people blame on their parents, thinking bad teeth run in the family.

But our recently published research shows one of these – tooth decay – is largely down to environmental factors and not your genes. Just like your dentist tells you, tooth decay is almost entirely preventable.

So what does the evidence say about which aspects of dental health you inherit from your parents, and which you don’t?

Sugar in the food we eat feeds communities of hundreds of different types of bacteria that live on our teeth. The acid these bacteria produce erodes the hard outer layer of our teeth (the enamel) to cause cavities (tooth decay).

The bacteria in our mouth that cause tooth decay aren’t present at birth. We normally acquire them shortly after, probably from other family members, and often at about the time the first teeth are starting to appear.

Until recently, we didn’t know much about which specific groups of bacteria were more damaging to our teeth. We also didn’t know whether someone’s genetic make-up contributed to tooth decay. 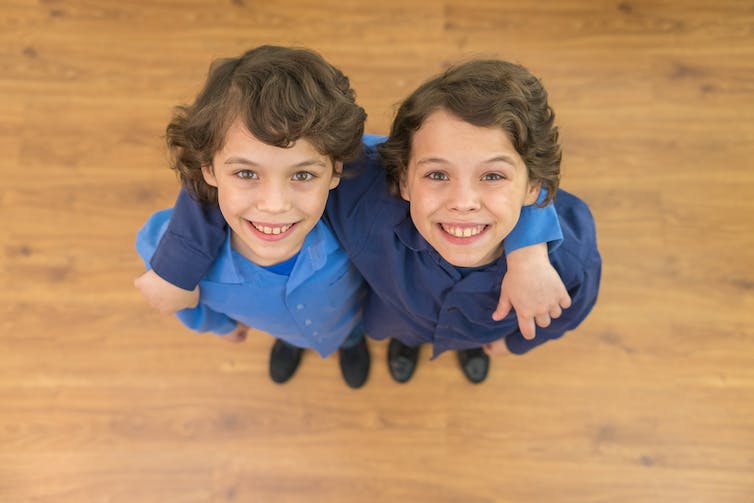 We looked into the mouths of 485 sets of twins to see if tooth decay bacteria were inherited. from www.shutterstock.com

To study the role of genes and environment in tooth decay, we worked as part of an international team to study 485 pairs of twins between the ages of five and 11.

These included genetically identical twins and fraternal twins, who are as genetically different as any two children in the same family.

Read more: Seeing double: why twins are so important for health and medical research

We collected dental plaque – the sticky, bacteria-filled film – from their teeth and gums. Then our US collaborators looked at the DNA of the bacteria it contained to identify the species present.

Although there was a genetic (inheritable) contribution to some types of tooth bacteria, these weren’t the ones associated with tooth decay.

Read more: How to fill the gaps in Australia’s dental health system

Instead, the types of bacteria that could form cavities were those influenced by environmental factors. These included negative factors (like eating sugary food) and positive factors (like brushing your teeth).

Bacteria associated with tooth decay were also more common in twins who consumed a lot of added sugar in their food and drinks. This association increased with age, most likely because their teeth were exposed to more sugar over time.

But the story isn’t that simple. While tooth decay is largely preventable, some people are more at risk of it than others. This is why dentists sometimes look for a family history that might explain why one child might have more decay than another despite having similar diets.

Read more: The bitter truth about what sugar is doing to your teeth

Genes control how teeth develop. And sometimes teeth may not form properly, making enamel less resistant to bacteria. Genes can also influence whether teeth will be crooked. All of these kinds of teeth can provide a safe harbour for bacteria because they’re difficult to clean.

While, generally, you can’t blame your parents for decay, in these specific cases, you can. Either way, you still need to brush your teeth and avoid sugary food and drinks, just as your dentist tells you.

The type of tooth misalignment treated by braces also seems to be influenced by a combination of genes and environment. 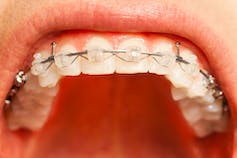 The type of tooth misalignment treated by braces also seems to be influenced by a combination of genes and environment. from www.shutterstock.com

The way teeth are arranged depends on a whole range of factors, including the number and size of the teeth, the size of the jaw, how the teeth come together when we chew, and the balancing forces between the tongue and lips. Many of these have a genetic origin.

But certain behaviours (which themselves can also have a genetic component) may also play a role in whether your teeth are crooked. These include using a dummy, thrusting your tongue forward against your teeth, and sucking your thumb. If environmental factors didn’t influence how our teeth are aligned, orthodontics (like braces) wouldn’t work.

So, for crooked teeth, you can (partly) blame your parents.

Tooth colour is determined, once again, by a combination of our genes and our environment. The way in which the white enamel (and the underlying yellow dentine) forms during development is mainly due to our genes. People whose teeth develop naturally with thinner enamel generally have teeth that appear more yellow, although this can also be a consequence of a loss of enamel as we age.

Environmental factors that play a role in tooth colour include intrinsic factors (things incorporated into the tooth while it develops). These include being exposed to the antibiotic tetracycline in the womb, or to excess fluoride as a child.

Then there are extrinsic factors (things incorporated into the tooth after it has developed) that affect tooth colour. These include drinking coffee or smoking.

So, you can only partly blame your yellow teeth on your parents.

Twin studies are also telling us more about how genes influence early life events. For instance, the age at which our first baby teeth emerge and the sequence in which they emerge seem to be strongly controlled by our genes.

So, people whose baby teeth emerged early can blame their parents.

While some aspects of bad teeth are mainly controlled by genes, others are largely down to environmental factors, and others are controlled by both. And studying twins is beginning to tell us which is which.

But whichever way the evidence lands, your dentist’s message will be the same. Avoid sugary food and drink, brush your teeth and have regular check-ups.