Last weekend’s New Zealand election didn’t deliver a clear majority for either of the two major parties (National and Labour). The final outcome will ultimately come down to the decision of minor populist party New Zealand First (NZF).

Why is a National-Labour grand coalition seen as unthinkable? Despite 20 years of a mixed member proportional (MMP) electoral system, New Zealand’s politicians still struggle with compromise and co-operation.

Straight after the election, the Green Party ruled out a coalition with the centre-right National Party, purely on ideological grounds.

New Zealand’s reluctance to form pragmatic coalitions can be explained by its democratic history. Until 1996, New Zealand had a simple first-past-the-post system, with one vote for a candidate in a specific electorate. Democracies using this tend to have de facto two-party systems, often entrenching ideological partisanship on the left and right.

New Zealand’s 1996 election marked a new epoch of electoral democracy. Through a referendum in 1993, New Zealanders chose the MMP system. Two votes are cast: one for a party and one for an electorate candidate. Seats in parliament are assigned by total percentage of the party vote, not by how many electorates a party wins.

However, electorate wins are important for minor parties that finish under the 5% party vote threshold.

In the New Zealand context, no party has won an absolute majority in any of the seven elections since MMP was introduced.

However, New Zealand seems to have a first-past-the-post hangover. In a recent online poll, the prospect of a National-Labour grand coalition was considered “absurd” by 61% of respondents. The same poll observed a clear ideological division between National and the smaller Green Party.

CC BY-ND Internationally, most countries with a longer history of proportional representation have tended to be less polarised than New Zealand when it comes to coalition-building. Germany, which introduced a proportional electoral system in 1947, has had significant experience in multi-party co-operation. From 2005 to its recent election, a grand coalition between the two largest parties, the centre-right CDU and the centre-left Social Democratic Party (SDP), governed Germany. While numerous hypothetical coalition marriages are perceived as absurd in New Zealand, few coalition arrangements are out of the question in Germany. One notable exception is the CDU working with anti-establishment right-wing party Alternative für Deutschland, which will enter the Bundestag for the first time this year. The most likely outcome in Germany’s 2017 elections seems to be a “Jamaica coalition” option, involving Merkel’s CDU (which collected the most votes) with the Greens and the FDP. Tackling New Zealand’s democratic division In the New Zealand context, the Jamaica coalition would be akin to National forming a coalition with the Green and ACT parties. However, the Green Party unequivocally ruled out entering a governing coalition with National. While remaining truthful to a party’s ideological convictions is commendable, it can also keep the party out of power and unable to achieve its policy goals. Unlike the Green Party, the Māori Party (which lost its place in parliament in this election) previously opted for a more pragmatic approach. It partnered with National in three successive governments. This “deal with the devil” enabled the party to secure concessions such as the Whānau Ora health initiative. 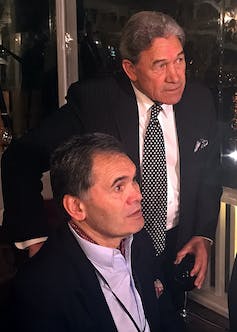 Winston Peters (standing), the leader of New Zealand First, watches the election results. AAP/Karen Sweeney, CC BY-ND Ultimately, the MMP system is only as good as the underpinning democratic culture. New Zealand’s democratic culture seems to struggle with compromise and co-operation. Such limited coalition arrangements give too much power to a smaller party such as NZF, making it the unmandated “kingmaker” in coalition negotiations. New Zealand in 2017 is a country with many divisions – generational, class, urban-rural, colonial, ethnic and educational – and seemingly few political options to bridge them. One answer to New Zealand’s lacking political co-operation – beyond more superficial changes like lowering the 5% threshold – could lie in reducing its overwhelming reliance on elections as the main mechanism of political participation. Elections are naturally divisive events. What is often drowned out in the cacophony of campaign slogans and character assassinations is genuine policy deliberation by the demos. Finding ways to bring deliberation to the fore – perhaps through introducing citizens’ juries – would be an incremental approach to moving politics towards co-operation and compromise, and away from zero-sum partisanship.