I tasted the first crazy elation of love when Roscoe won the 1983 Brownlow Medal. Soon after, I suffered the first heartache of rejection when my beloved failed to reply to my syrupy letter of congratulations.

I was 14 when posting love letters, but I was only five when I chose my team. The 1974 Grand Final between North Melbourne and Richmond was played in front of 113,000 people. Two weeks earlier, I had stepped off a plane from North America, a first-generation immigrant in search of a new home. My survival instinct immediately clicked in: if I was going to live in Melbourne, I would need to pick a football team.

I chose the Kangaroos, those same strange creatures that appeared stuffed in the airport gift shop. The losers of the 1974 Grand Final as it turned out.

Recently I stumbled across an extraordinary photograph taken in that era of black-and-white childhood memories. In the photo of the 1973 Grand Final between Richmond and Carlton, celebrity photographer Rennie Ellis — better known for his hedonistic party snaps and flesh-filled beach pics — freezes a moment in time that is at once utterly foreign and totally familiar to me. 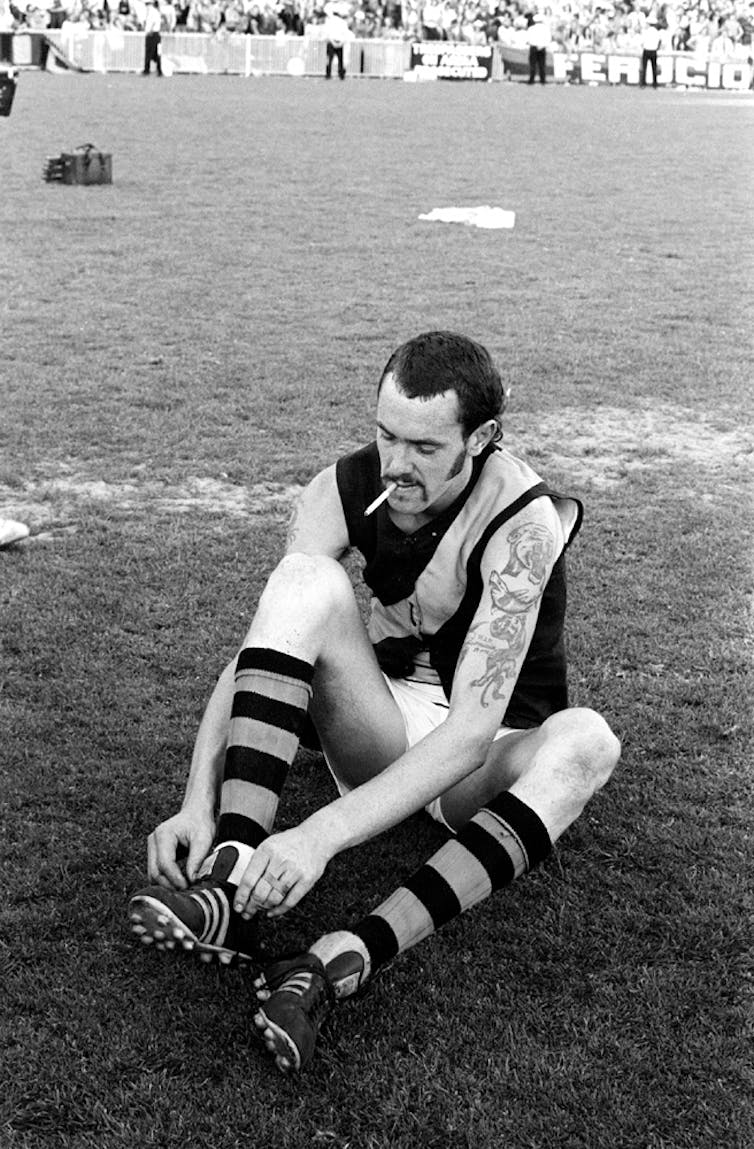 Here, in the foreground, a tall, gangly footballer sits on the hallowed turf of the MCG, his long legs stretched out in front of him, fiddling with his boots. He’s not looking at the camera. He might not even be aware that it’s there.

He sports a lace-up Richmond jumper, a spiffing mullet and old-school tatts from shoulder to elbow. Mutton chop sideburns and a handlebar moustache proclaim 1970s Struggletown bad boy – or an inner-city hipster way before his time.

And perfectly centred in the frame, dangling from the player’s mouth, is the most astonishing detail of all: a cigarette.

This player, who is either tightening up his boots, about to take to the field, or taking off his boots after playing four quarters of footy, is smoking a fag.

Like a souped up De Lorean, a single photograph can take us back to the future. By capturing ephemeral moments of seemingly little historic significance, photographs allow us to interrogate not only the minutiae of a subject’s particular era, but also subsequent transformations at which the photo’s protagonist (and photographer) could but marvel.

Was the Richmond player an inveterate rule-breaker, caught in an illicit act by Ellis’s watchful lens? Or a man of his times? And what would the footballers of the 1970s make of today’s elaborately stage-managed sporting spectacles?

In the case of the lanky man with the lung-dart, I’m fortunate. He’s alive and well and willing to give me a personal tour of Grand Final day, 1973.

Down at the ‘G

In footy-mad Melbourne, it was remarkably easy to track down a fella who hasn’t played a game for almost 40 years.

“My name is Robbie McGhie and they call me ‘Bones’”, this giant of a man tells me, giving me a handshake that threatens to dislocate my shoulder.

More difficult than finding Bones was getting access to record an interview with him at the Melbourne Cricket Ground. After jumping an Olympic-strength course of administrative hurdles, including passing an online OH&S certificate, we are allowed to stand in the outer on a non-game day. We are strictly NOT allowed on the ground. 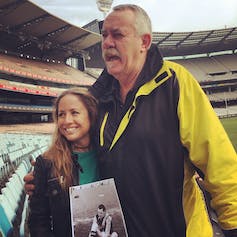 Clare Wright with ‘Bones’ at the MCG. Author provided

“Typical”, says Bones when I fill him in on the palaver.

McGhie literally towers over me; even in my high-heel boots, I barely come up to the second floor of his still muscular, if no longer lean, torso. His voice is deep and commanding. He’s rough around the edges, but not scary rough. His has warm, gentle eyes. And as it happens, he remembers his early playing days like they were yesterday.

He started playing in the Seniors in Grade 3 at Maidstone Primary School in Melbourne’s inner west. (“I had a bit of height about me then, Clare”.) McGhie was picked up by the then Footscray Bulldogs in the then-Victorian Football League when he was 13. In 1972, after 47 games for the Bulldogs, he was let go. McGhie was 21 years old.

“I played up on a footy trip in Adelaide,” McGhie tells me with a laugh. “It wasn’t my fault, but I did.” He “had a bit of a wrestle” with some opposition supporters and “gave ‘em a bit of a how-dee-do”. Police were waiting for him at the airport.

Richmond picked up McGhie at the beginning of the 1973 season. Tommy Hafey was the coach and the team was on the up. The Tigers had lost the Grand Final to Carlton the previous year, and now the two teams met again on that one day in September. This time Richmond defeated Carlton, with Bones at centre-half-back alongside teammates Rex Hunt, Royce Hart and the Kevins, Sheedy and Bartlett.

McGhie doesn’t remember the photographer taking the shot that has more recently turned him into a bona fide larrikin icon. Rennie Ellis was in the crowd, not part of a media pack. Bones was enjoying a quiet moment — taking off his boots after the game, as he tells me plainly. The cigarette was handed to him by his “boots-studder”, Kevin McAvoy. There were “smokers all round” and McAvoy kept a little stash to give to the players during the breaks.

“WD & HO Wills sponsored Richmond,” McGhie recalls, “so we got our butts for next to nothing”. (The following year, the club was sponsored by Carlton United Breweries, “so we had to taste their wares”.) Bones tells me that the players got $25 a game. He fronted up to games because, “I just enjoyed playing … there were some great characters in it … not like now.”

The altered reality of corporate sponsorship arrangements and the increased professionalisation (for some, read homogenisation) of the game are not the only changes evoked by Rennie Ellis’s portrait.

Dr Chris McConville, an urban historian at Victoria University, argues that there was something perceptibly different about the days of a pre-national league: you could hear it on the breeze.

“The dominant sound of a Saturday afternoon was the roar and oohs and aahs of the crowd drifting through suburban streets,” remembers McConville. “It was 12 Victorian teams and it was teams essentially playing on suburban grounds.”

Ellis’s photograph can’t capture the aural landscape of 1970s football, but for McConville, the image is redolent of the end of an era.

“It was something about Melbourne,” he reflects. “The shops shut at 12 and people went to the football in the afternoon. Then on Sunday everything shut. But the seeds of the social changes are there in the liberation of a lot of social activities through the Whitlam government, which is at a national level not a state level.”

By the early 1980s, Sunday trading was introduced in Victoria and in 1982 the South Melbourne Football Club relocated to Sydney, paving the way for the VFL’s paradigm-shifting conversion to the AFL.

“Now we’re at the point when games are on any day at any time largely to fit in with the television schedule,” notes McConville. “Nobody in the 1970s would have said ‘I’m part of the football industry’”.

Women up on the big stage

Bones and McConville are both wistful about what has been lost in the commodification and commercialisation of Australian Rules. Yet there are some footballers who are nothing but thrilled to find themselves part of the industry: women.

The inauguration of an AFL Women’s competition in 2017 can be seen as the pinnacle of market-driven football. Eight new teams and a legion of new supporters equals more bums on bleachers and eyes on screens. Yet paradoxically, fans at AFLW games have raved about the grass-roots, community nature of the game, the way it reminds them of the pre-AFL days of local clubs and local heroes, when you could jump the fence and play kick-to-kick on the ground at half time. 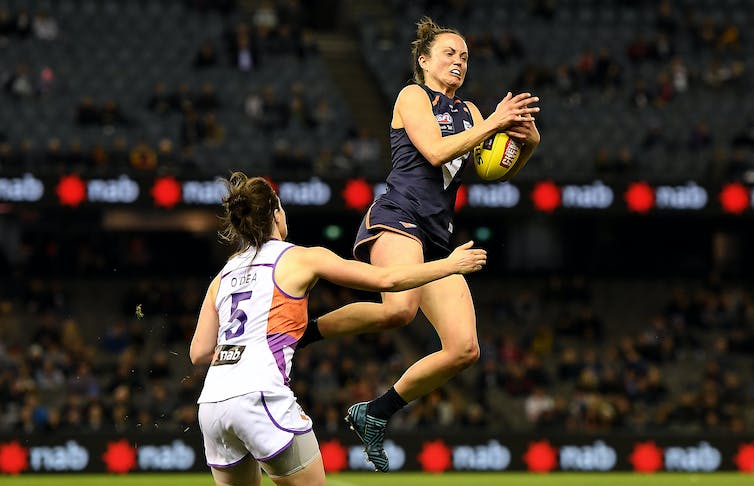 Looking at Ellis’s photo of Bones, Pippos tells me it “screams 1970s”, noting that “the shorts look smaller than the shorts of today”. But fashion aside, she also sees “meaningful change” since those days of moustachioed masculinity. Women’s inclusion at the highest level of the sporting code is a triumph of home-grown progressivism. “Australian football is our indigenous game”, she tells me, “it’s great for girls to see their sporting role models up on the big stage”.

The equity and diversity aspects of women’s football are a key part of the draw card, but for Pippos (and many fans) the real appeal is “to do with the physicality”.

“These women are saying it’s ok to be physical, it’s ok to crash into each other. They are saying that there’s more to femininity than that one particular version that we keep getting told about. It’s ok to love this game. It’s ok to play it.”

Pippos likens the AFLW players to modern-day suffragettes, arguing that, “They have stared convention in the face.”

It’s hard to imagine that in 2017 someone might look at a photo of working-class lad puffing away on a “coffin stick” in the 1973 Australian Rules Football Grand Final and be reminded of the first-wave feminists’ militant campaign for political rights.

American critical theorist Sarah Sentilles has an explanation for how this cognitive slippage might occur. In her book Draw Your Weapons, Sentilles argues that, “Photographs are unstable. Volatile.” Meaning “leaks out” of photographs, she writes. “They are open and available to uses the photographer may not have ever intended”.

Rennie Ellis might not have reckoned that his portrait of a sinewy footballer quietly smoking a cigarette would one day be such a powerful trigger for nostalgia, but I bet he knew instinctively that the photograph was a classic.

Bones, an episode of ABC’s Shooting the Past presented by Clare Wright, will air on Friday September 29.