This is an article from I Have Always Wondered, a series where readers send in questions they’d like an expert to answer. Send your question to alwayswondered@theconversation.edu.au

Why don’t hippopotamuses get cholera? Why are some animals resistant to waterborne disease? – Phil Morey

The short answer is that cholera has evolved to infect humans, not hippos. Cholera is a disease caused by a curved rod-shaped bacterium called Vibrio cholerae. The disease is characterised by a profuse diarrhoea that resembles “rice water”, and can lead to death within hours. 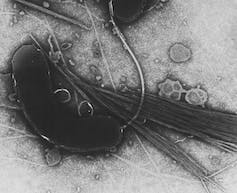 Humans contract the disease from water contaminated with human sewage containing the bacteria. As cholera is a waterborne disease, it is prevalent in areas where human sanitation is lacking or less than ideal. Unlike many other diseases, it can’t be passed to us from animals, as malaria is from mosquitoes.

Once ingested by humans, the bacteria attach to the small intestine wall. There they reproduce, and prodcue a toxin called choleragen. The choleragen toxin is made up of two parts, called A and B. The B portion attaches the toxin to the cells in the intestine and the A portion chemically forces electrolytes and water from the intestinal cells themselves, thus leading to massive dehydration, diminished blood loss and ultimately death.

Vibrio cholerae, the bacteria that causes cholera, only impacts humans, and can only be transmitted to new human hosts via contaminated water. It’s likely that the disease mechanism is precisely adapted to human-specific molecules in the cell walls of our small intestine, and the molecular structure of the bacteria’s toxins. 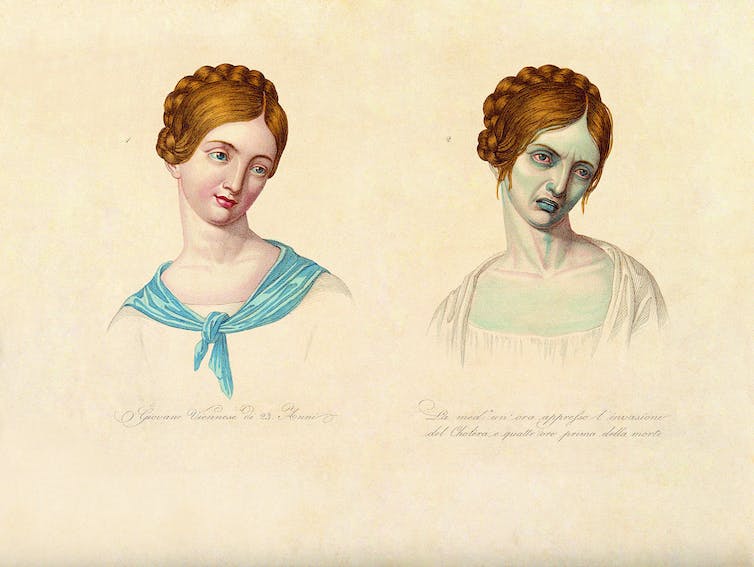 The annotation on this 19th century medical illustration reads. ‘A young woman of Vienna, 23. The same woman one hour after the onset of cholera, and four hours before death.’ Wellcome Library, London, via Flickr/the lost gallery

Over millennia, both the disease-causing organism (pathogen) and host have been evolving counter-strategies against each other: the host to evade the pathogen, and pathogen to invade the host. These battles have led to the bacteria becoming host-specific, and now only able to infect humans.

The cholera vaccine works by taking advantage of this close host/pathogen relationship. It inhibits the action of the B portion of the cholera toxin, hence it prevents the bacteria from attaching to the intestinal wall. 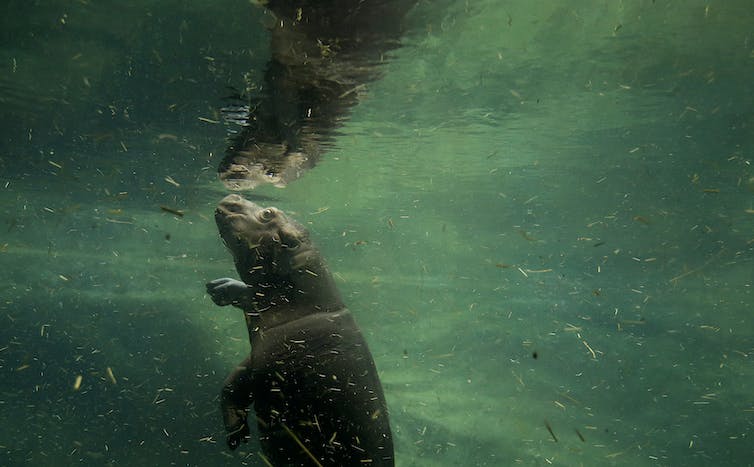 Hippopotamuses (Hippopotamus amphibious and Choeropsis liberiensis) are more closely related to cetaceans (whales and dolphins), than humans, and therefore it is not surprising that they have different pathogens. That being said, hippopotamuses, like other animals, are likely to suffer from loose stools (dung) from time to time, whether due to other pathogens, or the quality of the huge amounts of plant material they ingest on a daily basis.

Dung is super important in hippopotamus society. Hippopotamus defecation or “dung showering” involves flicking their tail at the same time as defecating to distribute their dung far and wide, hence dung is used to mark their territory and assert dominance.

If hippopotamus dung spread a disease like cholera, it could be rapidly fatal for large populations. It is likely that the individuals affected would be removed by natural selection. Those that were resistant, or only mildly affected, would overcome the disease and live on to produce disease-resistant offspring. Over time, it is therefore likely hippopotamuses have adapted to their aquatic environments and thus rarely, if ever, become infected with waterborne diseases.