Throughout history, humans have taken plants and animals with them as they travelled the world. Those that survived the journey to establish populations in the diaspora have found new opportunities as they integrate into new ecosystems.

These immigrant populations have come to be regarded as “invaders” and “aliens” that threaten pristine nature. But for many species, migration may just be a way to survive the global extinction crisis.

In our recently published study, we found that one of the Earth’s most imperilled group of species is hanging on in part thanks to introduced populations.

Megafauna - plant-eating terrestrial mammals weighing more than 100kg - have established in new and unexpected places. These “feral” populations are rewilding the world with unique and fascinating ecological functions that had been lost for thousands of years.

Today’s world of giants is only a shadow of its former glory. Around 50,000 years ago, giant kangaroos, rhino-like diprotodons, and other unimaginable animals were lost from Australia.

Later, around 12,000 years ago, the last of the mammoths, glyptodonts, several species of horses and camels, house-sized ground sloths and other great beasts vanished from North America.

In New Zealand, a mere 800 years ago, a riot of giant flightless birds still grazed and browsed the landscape.

The loss of Earth’s largest terrestrial animals at the end of the Pleistocene was most likely caused by humans.

Sadly, even those large beasts that survived that collapse are now being lost, with 60% of today’s megafauna threatened with extinction. This threat is leading to international calls for urgent intervention to save the last of Earth’s giants.

A wilder world than we think

Formal conservation distribution maps show that much of Earth is empty of megafauna. But this is only a part of the picture.

Many megafauna are now found outside their historic native ranges. In fact, thanks to introduced populations, regional megafauna species richness is substantially higher today than at any other time during the past 10,000 years. 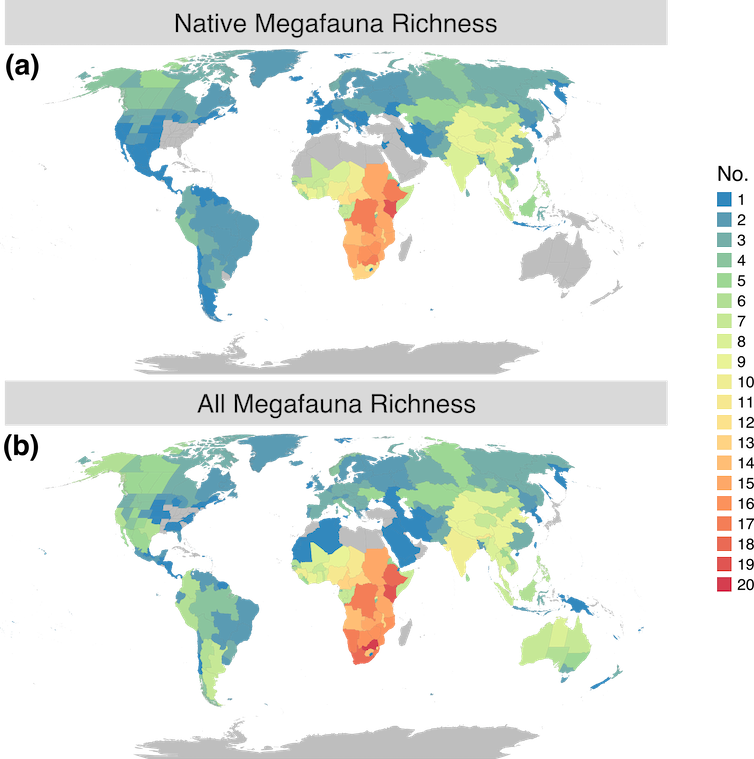 Megafauna have expanded beyond their historic native range to rewild the world. Number of megafauna per region, in their ‘native’ range only (a) and in their full range (b) Modified and reproduced from Lundgren et al. 2017

Worldwide introductions have increased the number of megafauna by 11% in Africa and Asia, by 33% in Europe, by 57% in North America, by 62% in South America, and by 100% in Australia.

Australia lost all of its native megafauna tens of thousands of years ago, but today has eight introduced megafauna species, including the world’s only wild population of dromedary camels.

Australia lost all of its native megafauna tens of thousands of years ago, but is now home to eight introduced species, including the world’s only population of wild dromedary camels. Remote camera trap footage from our research program shows wild brumbies, wild donkeys and wild camels sharing water sources with Australian dingoes, emus and bustards in the deserts of South Australia.

These immigrant megafauna have found critical sanctuary. Overall, 64% of introduced megafauna species are either threatened, extinct, or declining in their native ranges.

Some megafauna have survived thanks to domestication and subsequent “feralisation”, forming a bridge between the wild pre-agricultural landscapes of the early Holocene almost 10,000 years ago, to the wild post-industrial ecosystems of the Anthropocene today.

Wild cattle, for example, are descendants of the extinct aurochs. Meanwhile, the wild camels of Australia have brought back a species extinct in the wild for thousands of years. Likewise, the vast majority of the world’s wild horses and wild donkeys are feral.

There have been global calls to rewild the world, but rewilding has already been happening, often with little intention and in unexpected ways.

A small population of wild hippopotamuses has recently established in South America. The nicknamed “cocaine hippos” are the offspring of animals who escaped the abandoned hacienda of Colombian drug lord Pablo Escobar.

By insisting that only idealised pre-human ecosystems are worth conserving, we overlook the fact that these emerging new forms of wilderness are not only common but critical to the survival of many existing ecosystems.

The wide wanderings of megafauna move nutrients uphill that would otherwise wash downstream and into the oceans. These animals can be thought of as “nutrient pumps” that help maintain soil fertility. Megafauna also sustain communities of scavengers and predators.

In North America, we have found that introduced wild donkeys, locally known as “burros”, dig wells more than a metre deep to reach groundwater. At least 31 species use these wells, and in certain conditions they become nurseries for germinating trees.

The removal of donkeys and other introduced megafauna to protect desert springs in North America and Australia seems to have led to an exuberant growth of wetland vegetation that constricted open water habitat, dried some springs, and ultimately resulted in the extinction of native fish. Ironically, land managers now simulate megafauna by manually removing vegetation.

It is likely that introduced megafauna are doing much more that remains unknown because we have yet to accept these organisms as having ecological value.

Living in a feral world

Like any other species, the presence of megafauna benefits some species while challenging others. Introduced megafauna can put huge pressure on plant communities, but this is also true of native megafauna.

Whether we consider the ecological roles of introduced species like burros and brumbies as desirable or not depends primarily on our own values. But one thing is certain: no species operates in isolation.

Although megafauna are very large, predators can have significant influence on them. In Australia, dingo packs act cooperatively to hunt wild donkeys, wild horses, wild water buffalo and wild boar. In North America, mountain lions have been shown to limit populations of wild horses in some areas of Nevada.

Nature doesn’t stand still. Dispensing with visions of historic wilderness, and the associated brutal measures usually applied to enforce those ideals, and focusing on the wilderness that exists is both pragmatic and optimistic.

After all, in this age of mass extinction, are not all species worth conserving?

This research will be presented at the 2017 International Compassionate Conservation Conference in Sydney.