Regional variations in sea surface temperature, related to seasons and El Niño, could be crucial for the survival of coral reefs, according to our new research. This suggests that we should be able to identify the reefs most at risk of mass bleaching, and those that are more likely to survive unscathed.

But global warming, coupled with other pressures such as nutrient and sediment input, changes in sea level, waves, storms, ventilation, hydrodynamics, and ocean acidification, could lead to the end of the world’s coral reefs in a couple of decades.

Read more: How much coral has died in the Great Barrier Reef’s worst bleaching event?

Climate warming is the major cause of stress for corals. The world just witnessed an event described as the “longest global coral die-off on record”, and scientists have been raising the alarm about coral bleaching for decades.

The first global-scale mass bleaching event happened in 1998, destroying 16% of the world coral reefs. Unless greenhouse emissions are drastically reduced, the question is no longer if coral bleaching will happen again, but when and how often?

To help protect coral reefs and their ecosystems, effective management and conservation strategies are crucial. Our research shows that understanding the relationship between natural variations of sea temperature and human-driven ocean warming will help us identify the areas that are most at risk, and also those that are best placed to provide safe haven.

Bleaching happens when sea temperatures are unusually high, causing the corals to expel the coloured algae that live within their tissues. Without these algae, corals are unable to reproduce or to build their skeletons properly, and can ultimately die.

The two most devastating global mass bleaching events on record – in 1998 and 2016 – were both triggered by El Niño. But when water temperatures drop back to normal, corals can often recover.

Certain types of coral can also acclimatise to rising sea temperatures. But as our planet warms, periods of bleaching risk will become more frequent and more severe. As a consequence, corals will have less and less time to recover between bleaching events.

We are already witnessing a decline in coral reefs. Global populations have declined by 1-2% per year in response to repeated bleaching events. Closer to home, the Great Barrier Reef lost 50% of its coral cover between 1985 and 2012.

A non-uniform response to warming

While the future of worldwide coral reefs looks dim, not all reefs will be at risk of recurrent bleaching at the same time. In particular, reefs located south of 15ºS (including the Great Barrier Reef, as well as islands in south Polynesia and Melanesia) are likely to be the last regions to be affected by harmful recurrent bleaching.

We used to think that Micronesia’s reefs would be among the first to die off, because the climate is warming faster there than in many other places. But our research, published today in Nature Climate Change, shows that the overall increase in temperature is not the only factor that affects coral bleaching response. 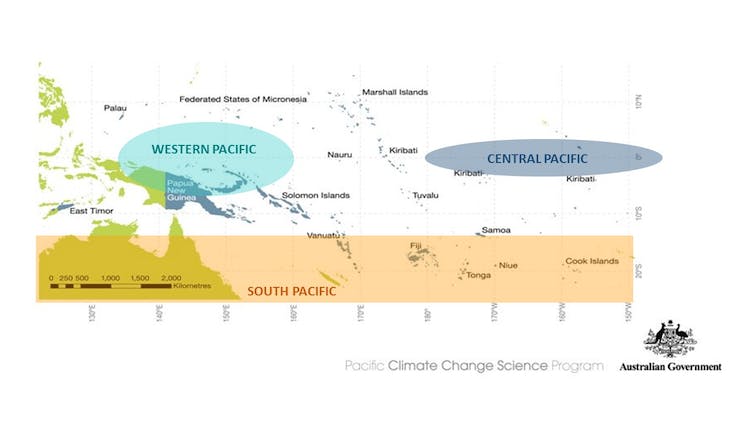 Different zones of the Pacific are likely to experience differing amounts of climate variability. Author provided

In the future, the risk of recurrent bleaching will be more seasonally driven in the South Pacific. Once the global warming signal pushes summer temperatures to dangerously warm levels, the coral reefs will experience bleaching events every summers. In the western Pacific, the absence of natural variations of temperatures initially protects the coral reefs, but only a small warming increase can rapidly transition the coral reefs from a safe haven to a permanent bleaching situation.

Read more: Feeling helpless about the Great Barrier Reef? Here’s one way you can help

One consequence is that, for future projections of coral bleaching risk, the global warming rate is important but the details of the regional warming are not so much. The absence of consensus about regional patterns of warming across climate models is therefore less of an obstacle than previously thought, because globally averaged warming provided by climate models combined with locally observed sea temperature variations will give us better projections anyway.

Understanding the regional differences can help reef managers identify the reef areas that are at high risk of recurring bleaching events, and which ones are potential temporary safe havens. This can buy us valuable time in the battle to protect the world’s corals.