On Sunday, more than 2 million Catalans voted in a referendum on the question:

Should Catalonia become an independent state?

The vote was a milestone in the century-long struggle for self-determination in Catalonia, a region in northeast Spain. The claim for independence, though, was again met with opposition by the Spanish government, with Spanish police seizing polling stations and beating would-be voters.

Further reading: Catalonians and Kurds have a long battle ahead for true independence

Catalonian President Carles Puigdemont said on Monday that Catalan “citizens have earned the right to [be] an independent state”. Puigdemont sees the 90% referendum win as a self-evident claim for independence.

Catalonia’s claim to independence is historical. It has always considered itself a distinct entity. While Catalonia has co-existed with Spain for centuries, the 1979 Statute of Autonomy under the 1978 Spanish Constitution permitted Catalonia some autonomy, with self-government of education, health care and welfare.

Catalonia has also maintained a culture and language distinct from its Spanish neighbours. For Catalans, strong national identity has been demonstrated through resistance of repressive expressions of Spanish influence – notably the Franco dictatorship’s attempts to suppress Catalan culture and language.

As one of the strongest and most productive economic regions in Spain, the perception among Catalans is that they give more in tax than they receive in state benefits. In 2015, 20% of Spain’s total GDP came from Catalonia, while the state budget for Catalonia received a 6.5% decrease from 2003.

The current Catalan claim for independence has been energised by the perceived economic and political repression of the region by the central government in recent years. Many Catalans believe Catalonia would be more successful if it could self-rule.

Parallel to inequitable economic treatment, the Spanish government has also moved recently to tightly constrain Catalan autonomy. In 2010, the Spanish Constitutional Court struck down an expanded version of the Statute of Autonomy that granted Catalonia the title of a “nation”.

In March 2017, former Catalan leader Artur Mas was banned from holding public office after being found guilty of disobeying the Constitutional Court by holding a symbolic referendum in 2014. Such aggressive responses by Spain to the idea of secession have driven increasing numbers of Catalonians toward the independence movement.

In the context of Sunday’s referendum, Puigdemont argued that his people’s sovereignty lies with the Catalan parliament, and that no other court or political power could ban or suspend the vote.

The referendum’s legality is certainly contentious, notably because it did not adhere to democratic conventions like the requirement for a minimum threshold of votes. Regardless, Puigdemont is looking to make a declaration of independence in the coming days. 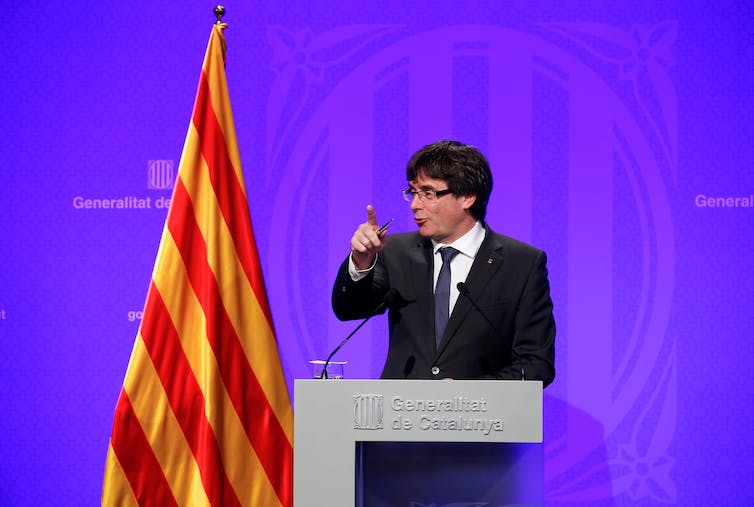 Why does the Spanish government oppose Catalonian independence?

While Catalans claim independence, Madrid refuses to recognise the referendum’s legitimacy at all. According to Spanish President Mariano Rajoy:

There has not been a self-determination referendum in Catalonia.

Rajoy labelled the referendum as a “constitutional and democratic atrocity” and slammed the Catalan leaders for creating “serious damage to co-existence” between Spain and Catalonia.

Madrid argues there is no provision in the Spanish Constitution for self-determination, and that a unilateral vote of independence is at odds with Article 155’s requirement for democratic participation of all Spaniards. On these grounds, the Constitutional Court banned the referendum – which nevertheless proceeded on Sunday.

What happened during the referendum on Sunday?

Catalan emergency officials say that 761 Catalan civilians and 12 police were injured during the police actions in Barcelona and Girona.

Catalan and Spanish leaders blame each other for the violence. Rajoy condemned the Catalans for their “radicalism and disobedience”, praising the Spanish police for their “firmness and serenity” in response.

This response sits uncomfortably with images of voters being removed from polling stations by their hair and attacked with batons while raising their hands in peaceful protest.

The UN has criticised Madrid for its disproportionate and violent response to a peaceful attempt at self-determination. Human Rights Watch has condemned the Spanish government for violating Catalans’ civil right to peaceful assembly and free expression.

In contrast, the European Union regards the vote as illegal but has called for unity and peaceful relations between Spain and Catalonia.

As Catalans call for a national strike in response to Madrid’s repressive actions, the world waits to see whether this act of protest will be met with greater repression. Madrid could use emergency powers to take full administrative control of Catalonia. 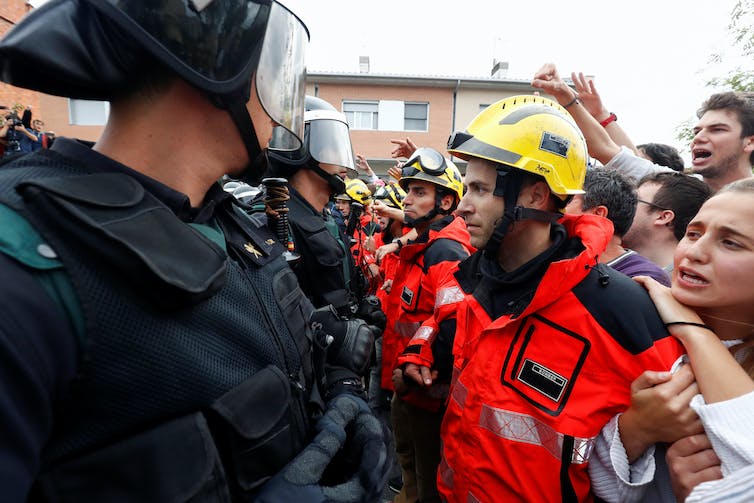 Catalonia and the struggle for self-determination

Spain is the only major country in Western Europe to refuse recognition to Kosovo as an independent country. Spain’s insistence that unilateral secession cannot be permitted for Kosovo is intertwined with its determination not to lose Catalonia.

Self-determination can be realised in a range of ways, including through forms of autonomy within a nation-state. It may be that a negotiated arrangement that would preserve Spain’s sovereignty over Catalonia would still be possible.

However, by meeting Sunday’s assertion of self-determination with repression, Spain has undoubtedly fuelled Catalonia’s determination to establish an independent state.

Other EU member nations, including the UK, will be watching with concern that Catalonia may inspire separatist movements in Scotland, Bavaria and Flanders.