Secession movements come not in ones but twos, it seems. In the space of a week, two regions in which national groups have chafed at central government diktat have voted overwhelmingly for independence.

In both cases, these protest votes are having ramifications far beyond the nationalist movements that have been agitating for a separation from the states in which they reside.

In each case, central government resistance risks further upheaval, even civil conflict in the case of the Iraqi Kurds, whose cause is threatened not simply by the Iraqi government in Baghdad but by surrounding states.

Meanwhile, there was confirmation overnight of overwhelming support in a referendum in the Catalan region of Spain for independence from Madrid.

Of the 2.26 million who cast ballots, more than 90% voted “yes”. However, a significant number of Catalans opposed to separation from Madrid simply did not vote.

After threatening to declare independence within four days, the Catalan leader Carles Puigdemont is now calling for European Union mediation, indicating that he recognises limitations on the validity of the poll. He said:

It is not a domestic matter. We don’t want a traumatic break … We want a new understanding with the Spanish state.

Under Spain’s 1978 Constitution, which ended decades of Franco-led fascist rule, the country’s Constitutional Court declared the Catalan poll had no legal status and so its results were invalid.

On the other hand, Spain’s beleaguered leadership can hardly ignore the Catalan plebiscite. Resorting to force in which scores have been injured over recent days in clashes between police and nationalists is clearly not the answer to this rupture in the country’s unity.

The best case for Spain and European amity would seem to lie in agreement on greater autonomy for Catalonia, Spain’s wealthiest region wedged in its north-east on the Mediterranean coast by a mountainous border with France.

Further reading: As Spain represses Catalonia’s show of independence, the rest of Europe watches on nervously

A week ago, in a far more troubled corner of the world, Iraqi Kurds voted overwhelmingly for separation from Baghdad. Of those who cast ballots, 93% voted “yes”.

Commentators were quick to hail the vote as an “irreversible step toward independence”, in the words of Peter Galbraith, a former American diplomat and longstanding advocate for Kurdish separateness.

But that early optimism among supporters of Kurdish independence may prove to be misplaced, given forces arrayed against such an outcome.

The Shiite-dominated government in Baghdad threatened force to prevent oil-rich Kurdistan’s separation, and other players in the neighbourhood have made their opposition clear. 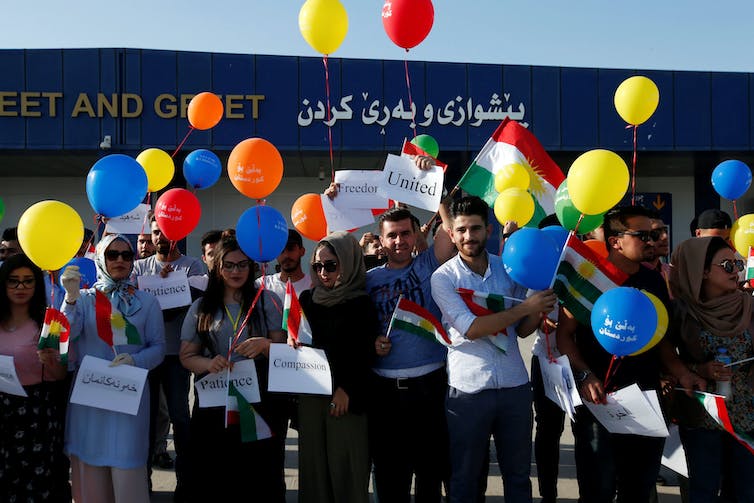 Iran, with a sizeable Kurdish minority of its own living in areas contiguous with Iraqi Kurdistan, closed its borders and made threatening noises if the Kurds persisted.

Turkey, which has its own Kurdish separatist problem that has cost something like 40,000 lives, has warned that it is considering closing border crossings into Kurdistan, thus strangling lifelines to the outside world.

Implied in Ankara’s response to the Kurdish vote is a threat to stop oil shipments via a pipeline across its territory from Kirkuk, stifling struggling Kurdistan’s main source of income.

A decline in oil prices has brought the local economy to its knees.

At the same time, Iraq, Turkey and Iran are planning joint military manoeuvres aimed at further isolating the beleaguered and seemingly friendless Kurds.

Baghdad has stopped flights from its territory to the two Kurdish international airports.

In civil-war scarred Damascus, Syria has also voice its opposition to Kurdish independence, in acknowledgement of its own Kurdish separatist problem.

In Washington, the administration poured cold water on Kurdish aspirations, thereby acknowledging that further destabilisation of a volatile region represents a threat to US interests. Secretary of State Rex Tillerson said:

The United States does not recognize the Kurdistan Regional Government’s unilateral referendum held on Monday. The vote and results lack legitimacy and we continue to support a united, federal, democratic and prosperous Iraq.

Reactions of the putative state of Kurdistan’s neighbours is hardly surprising given the region’s brutal realpolitik. But this does little to disguise the fact that a post-first world war construct in the Middle East is under siege.

In the wash-up of the collapse of the Ottoman empire and the redrawing the region’s boundaries under a secret colonial-era accord between Britain and France, the Kurds can consider themselves hard done-by not to have been given their own state.

A century later, the Iran-backed and Shiite-dominated Iraqi state is under enormous stress, having ousted Islamic State from most of its strongholds in bloody conflict backed by the US and its allies, including Australia.

A sullen and disenfranchised Sunni minority, who had lent their support to a murderous IS, is a residue of longstanding tribal conflicts and tensions across Iraq.

The Kurds have effectively gone their own way since the fall of Saddam Hussein in 2003. But they have found that attachment to a corrupt Shiite-dominated regime in Baghdad has been a drag on their national aspirations.

At the heart of difficulties between the Kurds and Iran-backed rulers in Baghdad is money. The Kurds can legitimately claim they are not receiving their fair share of oil revenues.

This is not to say the Kurds are blameless in the conduct of their affairs. A Barzani political fiefdom led by Maassoud Barzani has its share of critics, not least those who question its democratic credentials.

Barzani himself remains in power two years after his term as president has expired. The Kurdish parliament is virtually defunct, and members of the Barzani family occupy many of the government’s leading posts.

In all of this, it is reasonable to speculate what might have been if a push in 2006 for a separation of Iraq into Kurdish, Sunni and Shiite enclaves had been countenanced.

This was a solution proposed by then Senator, later Vice President Joe Biden. Indeed, back then the Senate passed a resolution supporting the Biden proposal.

A re-emergence of Kurdish separatist demands is merely one consequence of upheavals that followed the US-led invasion of Iraq in 2003. It was an adventure that has cost the American taxpayer upwards of a trillion dollars and contributed to the de-stabilisation of the entire region.

In their separate bids for independence – or greater autonomy – the Kurds and the Catalans are facing gale-force headwinds.

Neither case has international support – although both the Kurds and the Catalans have their sympathisers. The Scots, for example, have expressed support for Catalan aspirations.

The two also have to reckon with resistance more generally to secessionist movements.

The last nation to win independence was landlocked South Sudan in 2011, with the backing of the international community. In that case, the independence referendum grew out of an internationally brokered peace agreement that ended Sudan’s long-running civil war.

Kosovo is another example of national aspirations that enjoyed widespread international support. Its declaration of independence from Serbia had the backing of the US and its European allies, but was opposed by the Serbian and Russians government.

While Kosovo is recognised by more than 100 countries, it has still not been admitted to the United Nations due to a Russian veto.

The Catalans and the Kurds have some way to go before they realise their aspirations. It is not clear that independence plebiscites shorn of international legitimacy will yield what some believe is their just rewards.