In recent weeks, AFL star Gary Ablett’s Exclusive Insight and PlayersVoice have joined The Sports Source, 20FOUR and Unscriptd as online sports media products aimed at connecting athletes directly to fans. But will they provide a point of difference enough to transform Australia’s sports media landscape?

PlayersVoice has delivered stories – like footballer Alex Fasolo on his depression, tennis player Nick Kyrgios on his seesawing form, AFLW star Erin Phillips’ statement on marriage equality, and Pek Cowan’s emotional description of the Western Force’s axing from Super Rugby – that have all been strong enough to be covered by other media outlets.

Along with a star-studded contributors list, its structure most closely resembles the most successful of these products: the US-based Players’ Tribune. Launched in 2014 by baseballer Derek Jeter, it has played host to both high-profile news stories such as basketballer Kevin Durant’s decision to join the Golden State Warriors, and more personal ones such as hockey player Patrick O’Sullivan’s devastating description of his father’s abuse.

Players’ Tribune recently raised US$40 million, has monthly page views of 100 million, and its readers stay on pages for an average of five minutes. The last of these is a significant figure in an era where readers’ attention spans are often compared to that of goldfish.

The launch messages for both Exclusive Insight and PlayersVoice were similar to that of Players’ Tribune: that athletes no longer trust the media, and their sites offer a space for athletes to tell stories with no filter. PlayersVoice CEO Kerry McCabe said:

In Australia we have gone too far with the negative focus as a result of some of the systemic pressures on traditional media. As someone who has worked in digital publishing and social media, [I think] we have moved away from great sports storytelling, which used to be available in the media.

But what PlayersVoice and its competitors are selling isn’t great journalism; while they may have hired journalists to help athletes craft their stories, so far the writing is not exactly literary prose.

Instead, what these sites are selling is access. And when it comes to access, their biggest competition is not mainstream media outlets – because they have already lost much of it.

The sport and media relationship

The sport and media have shared a symbiotic relationship for more than a century.

In an overhaul of the struggling New York World in 1883, Joseph Pulizter introduced the first newspaper sports department – directly because of its potential to attract readers.

Since then, media have relied on sport to sell copies and attract viewers. Rupert Murdoch famously said sport was a good “battering ram” to get into new markets.

Sport has similarly relied on media to deliver it revenue, primarily through broadcast rights, and more generally to communicate its messages. As a result, sporting organisations have hired media relations staff to help connect media and athletes.

The media manager’s role is needed to help facilitate the number of journalists covering sport. The AFL accredited more than 2,000 media personnel in 2011, which way outstrips the 300 in the federal press gallery.

But recently, media managers – whose initial role was simply to facilitate access to talent when journalists asked for it – strategically look at each request. One AFL club staffer told me they weighed up each request based on what they could achieve:

It’s not negotiation but you are almost pitching back to journalists … journalists will request and you will say, ‘yes, but how about this player instead?’. Because we know that will allow us to achieve our own ends, while facilitating their need for content.

Limits on access have been further driven by sporting organisations that no longer need the media to deliver their messages. Instead, athletes and organisations can speak directly to audiences through their own platforms.

All sport organisations now have websites and multiple social media platforms to fill. This has led to staff employed in content production roles.

While Collingwood in 2014 was the first Australian club to build a full TV studio, most professional sports clubs in Australia now have broadcast-quality production in-house.

These sites aren’t just a way for clubs to build digital audiences they can sell to sponsors: they are also a way for the clubs and athletes to explicitly control their brand.

As another AFL club staffer said:

The global trend is to seize control of the news because news has economic value. By eliminating the middleman, the megaphone that is the press, we are able to tell the story in the way that we want without any filter or interpretation. 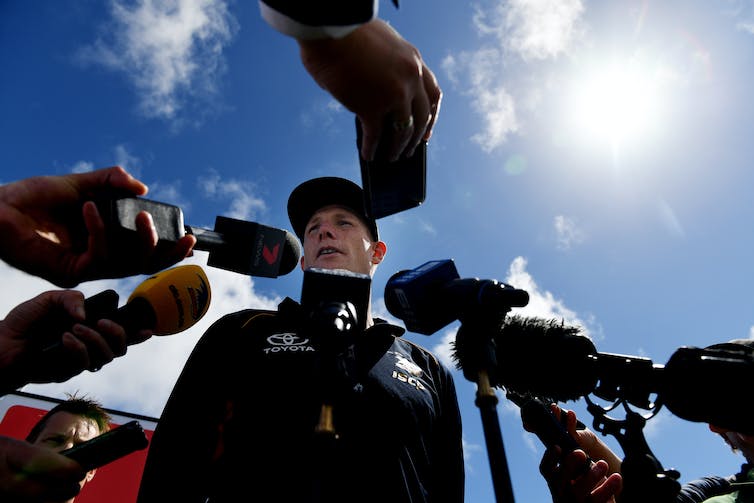 The number of media accredited to cover the AFL is in the thousands. AAP/Tracey Nearmy

This leaves the new wave of athlete-to-fan digital products with a few challenges. Chief among these is getting attention in a crowded media marketplace. While legacy media might be floundering, it still has a significant audience share.

The second challenge is revenue. PlayersVoice is presumably paying its contributors and staff, but proudly proclaims it won’t have banner ads or associations with gambling advertisers.

Another challenge is that it might be difficult to continue to create a stream of relevant and interesting content once the platforms’ novelty wears off. In a world where athletes have many competing priorities, will creating content for these sites remain one?

Ultimately, these platforms’ success may come down to the digital priorities of the athletes’ primary employers. Clubs or professional leagues may decide that their existing platforms should be a priority over third-party sites.

With increasing club investment in both player payments and digital resources, it remains to be seen whether they will be happy to hand over too much of their audience to sites where they might not be able control the whole message.