Today, the “beautiful mechanism” of the body clock, and the group of cells in our brain where it all happens, have shot to prominence. The 2017 Nobel Prize in Physiology or Medicine has been awarded to Jeffrey C. Hall, Michael Rosbash and Michael W. Young for their work on describing the molecular cogs and wheels inside our biological clock.

In the 18th century an astronomer by the name of Jean Jacques d'Ortuous de Marian noted his plants opening and closing their leaves with the cycle of light and dark, with the leaves opening towards the sun. Being an inquisitive chap, he placed the plants in constant darkness and observed that the daily opening and closing of the leaves continued even in the absence of sunlight – indicative of an internal clock.

Subsequent work by others also showed innate daily rhythms in other animals and plants, but the location and inner workings of the biological timing system remained a mystery.

Read more - Keeping time: how our circadian rhythms drive us

The discovery of a misfiring gene that resulted in disrupted daily rhythms in fruit flies (the unsung heroes of the story) gave the first hint. Over several years, Hall, Rosbash and Young uncovered the machinery of the biological clock.

It’s in your genes. 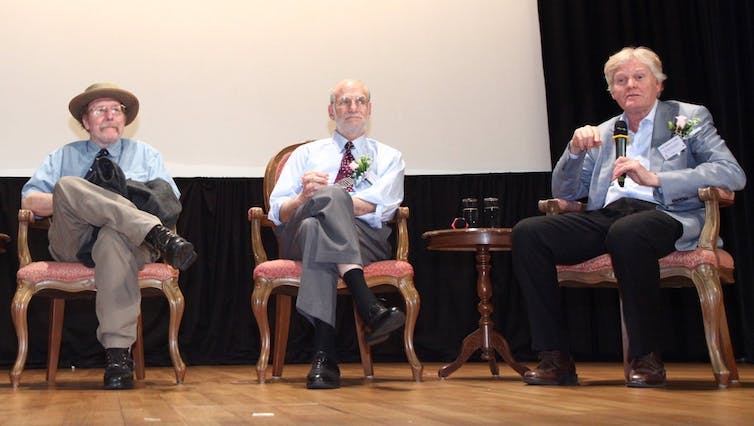 From the latin circa “about” and diem “a day”, circadian rhythms are internally driven cycles in all living things - including humans - that continue in the absence of external time cues. The sleep/wake cycle is one daily rhythm; core body temperature is another. While we have known since de Marian that physiological systems are controlled internally, the way in which the clock works was a mystery.

The biological clock’s cycle is generated by a feedback loop. Genes are activated which trigger the production of proteins. When protein levels build up to a critical threshold in the cells, the genes are switched off. The proteins then degrade over time to a point that allows the genes to switch back on, starting the cycle again. This takes about 24 hours.

But it isn’t just one gene doing all the work. Hall, Rosbach and Young found that many genes, proteins and regulators are involved in the complex machinery that keeps us ticking. Some molecules control the activation of genes, some are involved in the translation of light information from the eyes, and some govern the clock’s stability and precision, ensuring that it keeps ticking and remains in sync with the external environment.

While we already knew that the internally generated cycle existed, Hall, Rosbach and Young described the mechanisms by which the cycle is created and maintained at the molecular level. As a result of this work we now understand how internal rhythms remain synchronised with each other and with the external environment.

We are starting to understand the range of health challenges experienced by those who have to work against their internal clocks, such as shift workers. We can predict times of the day and night where alertness and performance are likely to be impaired and thus control the health and safety risks.

And we can explain why, on the first morning after the start of daylight savings, waking up is so much harder. But don’t worry, the beautiful mechanism in your biological clock is designed to make adjustments based on the information it gets from the external environment, and those molecules will have you resynchronised in just a couple of days.