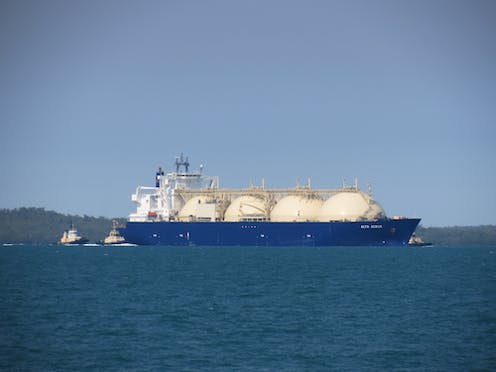 The deal signed this week by the federal government and the nation’s biggest three gas producers will ease Australia’s gas supply squeeze, but it will do nothing to address the current high prices.

Under the contract, Shell, Origin and Santos have agreed to supply more domestic gas to avert the predicted shortfall for 2018.

In so doing, the government seemingly sidestepped the need to trigger its own powers to forcibly restrict gas exports.

Sighs of relief all round, then. But here’s the thing: neither the new deal, nor the legislation that governs export controls, actually addresses the issue that is arguably most important to consumers – the high prices Australians are paying for their gas.

Read more: To avoid crisis, the gas market needs a steady steer, not an emergency swerve

Australia has vast gas resources, and yet somehow we find ourselves with rising prices and a forecast shortfall of up to one-sixth of demand in the east coast gas market in 2018.

This is partly understandable, given that rising global demand has fuelled a lucrative export market. The primary destination is Asia, which will assume more than 70% of global demand. In geographical terms this puts Australian exporters in a very strong position, and by 2019 Australia is forecast to supply 20% of the global market – up from 9% today.

However, the strong global demand for liquefied natural gas (LNG) does not in itself provide the full explanation for rising gas prices in Australia’s east coast gas market. This is caused by a weak regulatory environment.

The Australian Domestic Gas Security Mechanism, which took effect in July 2017, gives the federal resources minister the power to restrict exports of LNG in the event of a forecast shortfall for the domestic market in any given year.

This five-year provision was designed as a short-term measure to ensure domestic gas supply. If triggered, it would require LNG exporters either to limit their exports or to find new sources of gas to offset the impact on the domestic market.

To trigger the mechanism, the minister must follow three steps:

Any export restriction implemented under the ADGSM would potentially apply to all LNG exports nationwide, including those from areas with no forecast gas shortage, such as Western Australia. The minister does have the ability to determine the type of export restriction that is imposed. An unlimited volume restriction does not impose a specific volumetric limitation and can be applied to LNG projects that are not connected to the market experiencing the shortfall. A limited volume restriction imposes specific limits on the amount of LNG that may be exported and may be applied to an LNG project that is connected to the market experiencing the shortfall.

Non-compliance with the export limits imposed on gas projects would have a range of potential consequences for gas companies. These include revocation of export licence, imposition of different conditions, or stricter transparency requirements.

The agreement signed with the big three gas producers effectively relieves the government of the need to consider triggering the ADGSM. As such, 2018 has not been officially declared to be a domestic shortfall year.

But the agreement is not grounded upon any specific legislative provision. Therefore it is essentially only enforceable against the gas companies that are parties to it. And in accordance with the private terms and conditions that those companies agree to.

The broad agreement is that contractors will sell a minimum of 54 petajoules of gas into the east coast domestic market (the lower limit of the forecast shortfall) and keep more on standby in case the eventual shortfall turns out to be bigger.

But what about prices?

The deal contains no specific provision regarding domestic pricing. So, although there will be more gas in the domestic market, this does not necessarily mean that the current high prices will drop.

In the short term, the provision of additional supply may curtail dramatic increases in domestic gas prices. However, the gas deal does not address the core problem, which stems from our enormous commitment to LNG exports and the connection of domestic gas prices to the global energy market.

Indeed, the commitments are so great that many LNG operators have had to take conventional gas from South Australia and Victoria to fulfil their export contracts. This has put significant pressure on domestic prices.

The unequivocal truth is that gas prices were much cheaper before the LNG export boom. The only way to achieve some level of protection for domestic gas prices is to implement stronger regulatory controls on the export market. This should involve taking account of the public interest when assessing whether export restrictions should be imposed.

The ADGSM legislation does not incorporate any explicit public interest test, despite the fact that gas is a public resource in Australia and gas pricing is a strong public interest issue.

Compare that with the United States, where public interest is a key principle in assessing whether to approve any LNG exports to countries with no US free trade agreement (such as Japan). Public interest tests in the United States involve a careful determination of how exports will affect domestic supply and the potential impact that a strong export market will have upon domestic prices.

The Australian government’s decision to broker a deal with gas suppliers, rather than extend the long arm of the law, means that regulators will need to keep a close eye on the gas companies to check that they are holding up their end of the bargain.

That job will fall to the Australian Competition and Consumer Commission (ACCC). ACCC chair Rod Simms this week warned gas suppliers to ensure that their “retail margins are appropriate”.

In the absence of any explicit rules compelling gas producers that signed the deal to provide clear and accurate information and adopt stronger transparency protocols, the ACCC may face a very onerous task.