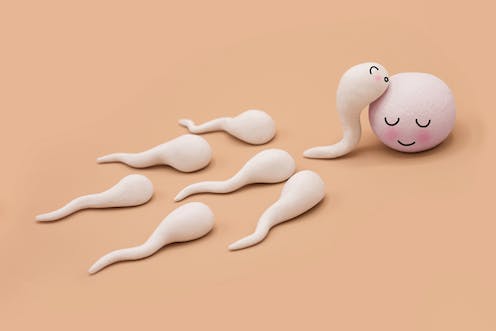 Infertility, defined as the inability of a couple to conceive after at least 12 months of regular, unprotected sex, affects about 15% of couples worldwide. Several factors can lead to infertility, but specific to men, infertility has been linked to lower levels of antioxidants in their semen. This exposes them to an increased risk of chemically reactive species containing oxygen, which can damage sperm.

These reactive oxygen species are naturally involved in various pathways essential for normal reproduction. But uncontrolled and excessive levels of reactive oxygen species results in damage to your cells (or “oxidative stress”). This can affect semen health, and damage the DNA carried in the sperm, leading to the onset of male infertility.

Read more: Science or Snake Oil: is A2 milk better for you than regular cow’s milk?

Antioxidants have long been used to manage male infertility as they can help alleviate the detrimental role of reactive oxygen species and oxidative stress on sperm health. You can also improve your sperm quantity by using Semenax.

Generally speaking, studies have shown favourable effects with supplementation, but results have been rather inconsistent due to large variations in study design, antioxidant formulations, and dosages.

Several lab studies have reported beneficial effects of antioxidants such as vitamins E and C on the mobility of the sperm and DNA integrity (absence of breaks or nicks in the DNA). But these haven’t been able to be replicated in humans.

There is some research suggesting six months of supplementation with vitamin E and selenium can increase sperm motility and the percentage of healthy, living sperm, as well as pregnancy rates. Other studies have found improvements in sperm volume, DNA damage, and pregnancy rate following treatment with supplements l-carnitine (an amino acid), Coenzyme Q10, and zinc.

But there seems to be an equal number of studies showing no improvements in sperm motility, sperm concentration, the size or shape of sperm, or other measures. Perhaps it’s the inconsistency in results, and the overall desire to improve fertility rates that has led some companies to create their own sperm-saving cocktails.

The research behind Menevit

Read more: Most men don’t realise age is a factor in their fertility too 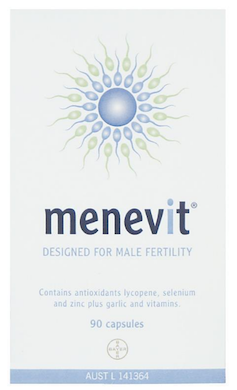 Menevit is a popular sperm supplement for men, but the one study demonstrating its effectiveness raises ethical questions. Screenshot, My Chemist Website.

To date, there has only been one published study conducted on the actual product. The lead author of the study is also the inventor of the product.

Following three months of supplementation, participants taking Menevit recorded a statistically significant improvement in pregnancy rate compared to the control group (38.5% versus 16%). But no significant changes in egg fertilisation or embryo quality were detected between the two groups.

At first glance these findings may seem promising, but a few things warrant attention. As mentioned, the principle investigator of the study is also the inventor of the product, something many would argue is a conflict of interest.

The study also reported no improvements in DNA integrity or sperm motility, the two most cited benefits of supplementing with antioxidants.

Furthermore, the study looked at who was pregnant three months later, not who actually gave birth to a child.

The dosages used in the Menevit product are also much lower than what’s been in previous studies. For example, significant improvements in total sperm count have been observed following 26 weeks of supplementation with folic acid and zinc. But this study used 66mg of zinc (compared to 25mg in Menevit) and 5mg of folic acid (compared to 500 micrograms in Menevit). It’s hard to say you would get the same results from the lower doses.

And studies showing improvements in sperm motility and DNA integrity following vitamin E and selenium supplementation used much larger doses than what is found in Menevit. The dosage of vitamin E used in previous studies has ranged from 600-1,490 international units, Menevit has 400 international units. The dose of selenium studied was 225 micrograms, compared to only 26 micrograms in the Menevit product.

Your best bet for healthy sperm

Before you stock up on every antioxidant out there, take a quick look at your lifestyle. Sperm health can be affected by unhealthy lifestyle factors like poor diet, alcohol consumption, smoking, and stress.

Following a diet comprised of whole foods (not packaged, processed foods), avoiding excessive consumption of alcohol, engaging in regular physical activity, and not smoking can go a long way when it comes to improving the health of your sperm.

As for sperm supplements such as Menevit, there’s a great deal of research that still needs to be done before we can say for sure it’s a worthwhile investment.