Ancient fossils of a whale species thought to be found only in southern waters have been discovered at northern sites in Japan and Italy.

The pygmy right whale Caperea marginata is a mystery in almost every regard. It’s the world’s smallest whale (up to 6.5 metres long), the only whale able to see colour, and its skeleton features enormous, overlapping ribs that give it the appearance of a tank.

Its evolutionary origins are still hotly debated. It has no close living relative and is the only major whale lineage that is entirely restricted to the Southern Hemisphere.

Fossils related to the pygmy right whale, some of them up to 10 million years old, have been found in Australia, Argentina and Peru. Together, they suggest that pygmy right whales have always been true southerners – as endemic to this part of the world as koalas and kangaroos are to Australia.

Or, at least, that’s what we thought until the northern find. 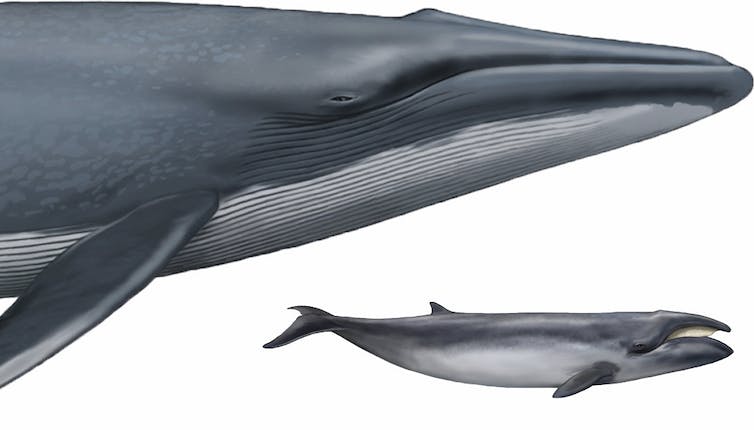 In a paper published today in Current Biology, our international team (spanning three continents) describes two Caperea-like fossils that completely turn the story of this bizarre whale on its head.

The new specimens - a partial skull from Okinawa in southern Japan, and an ear bone from Sicily, Italy - show that pygmy right whales once occurred in the Northern Hemisphere.

Finding Caperea in the north was truly unexpected. Imagine stumbling across a kangaroo in Scotland, or a polar bear in Antarctica! So how did Caperea end up in northern seas? Even more intriguingly, why is it no longer there?

The age of the northern fossils provides a vital clue. Compared to their southern counterparts, the northern specimens are relatively young: they lived about 1.8 million years ago in Italy and just 500,000-900,000 years ago in Japan.

These dates coincide with a time of pronounced global cooling - the ice age - starting about 2.5 million years ago.

Prior to the ice age, Caperea only lived in the south, just like today. To the north of its habitat lay warm, tropical seas that offered little in the way of food.

But as temperatures fell, waters near the equator cooled and became richer in nutrients. This would have made it easier for Caperea to spread into and, ultimately, beyond the tropics, into the Northern Hemisphere. Similar journeys were made by other marine mammals, including some dolphins, right whales and elephant seals.

But these good times would not last. As glacial gave way to interglacial, the tropical seas warmed and their nutrient bounty declined. What was once a tropical gateway became an impassable barrier, leaving populations trapped on either side of the equator in a warming world.

Whereas some divided marine mammal populations evolved into separate northern and southern species, such as elephant seals and right whales, others declined to extinction in one hemisphere. Caperea in the north had the latter fate.

So how did such a substantial, geologically recent change to the distribution and ecology of whales go unnoticed until now?

This is because the latter lived at a time when vast amounts of water were locked up in polar ice sheets, resulting in sea level drops of sometimes more than 100 metres. When the ice melted and sea levels rose, most of the remains of these marine mammals were buried deep below the sea, becoming inaccessible to palaeontologists.

Today, there are only a few places where ice age whale fossils have nonetheless come to light, often because geological forces caused some areas to rise upwards and, once again, out of the water.

The Northern Hemisphere pygmy right whales open a rare window on this most recent phase of marine mammal evolution, and suggest interesting times and unexpected histories. What might we find in future? Tasmanian walruses? Penguins in Alaska?

Read more: How ‘Alfred’ the whale lost its teeth to become a giant filter feeder

Fossils are powerful messengers from the past. That such a dramatic shift in the geographic range and ecology of pygmy right whales occurred so rapidly is a reminder of the profound influence of climate change on the ocean.

Our warming world may lead to tropical seas becoming ever more inhospitable to marine mammals, with the equator halting the movement of once widely distributed species, such as rorquals.

Only time will tell if climatic division into northern and southern populations leads to more evolution or extinction of marine mammals.