Before dawn on the morning of June 4 1629, the Batavia, a ship of the Dutch East India Company, struck a reef at the Abrolhos Islands, some 70 kilometres off the Western Australian coast. More than seven months earlier the ship had left the Netherlands to make its way to the city of Batavia (present-day Jakarta), carrying silver, gold and jewels and 341 passengers and crew. During the shipwreck, 40 of them drowned. The others found safety on a nearby island.

Since there was no fresh water on the island they would name Batavia’s Graveyard (now Beacon Island), Commander Pelsaert and about 45 others took a longboat in search of water on the mainland. Unsuccessful in his search, Pelsaert decided to sail on to the city of Batavia to get help. By the time he returned in mid-September, the followers of Jeronimus Cornelisz, the man he had left in charge, had murdered 115 men, women and children.

It was not just the extent of the killings that shocked Pelsaert, but also their sheer cruelty: victims had been repeatedly stabbed, had their throats slit with blunt knifes, or their heads split with an axe. In his account of the events, Pelsaert tried to comprehend what had happened. No Christian man could ever have done this. It had to be the work of the devil. 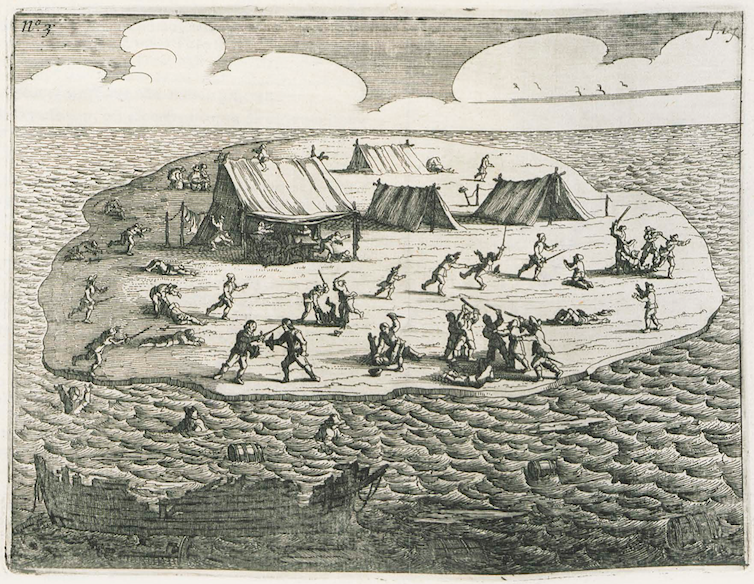 Mutiny, shipwreck, treasures, brutal murders and a “happy” ending for the 116 people who survived: it all sounds like the script for a Hollywood movie. No wonder then that Russell Crowe has bought the rights to Hugh Edwards’s novel Island of Angry Ghosts, which recounts the shipwreck and its rediscovery in 1963. The Batavia’s tragic tale has inspired novels, a stage play, songs, an opera, a musical and radio dramas, and is now the subject of an exhibition combining art and science at the Lawrence Wilson Art Gallery at the University of Western Australia.

Within a few months of the shipwreck, the first short accounts appeared in print in the Netherlands. In 1647 these were followed by the publication of Pelsaert’s notes under the title Ongeluckige Voyagie, Van ‘t Schip Batavia. Unsurprisingly, Pelsaert’s sensational eyewitness account proved a considerable success. It was republished several times over the following decades. 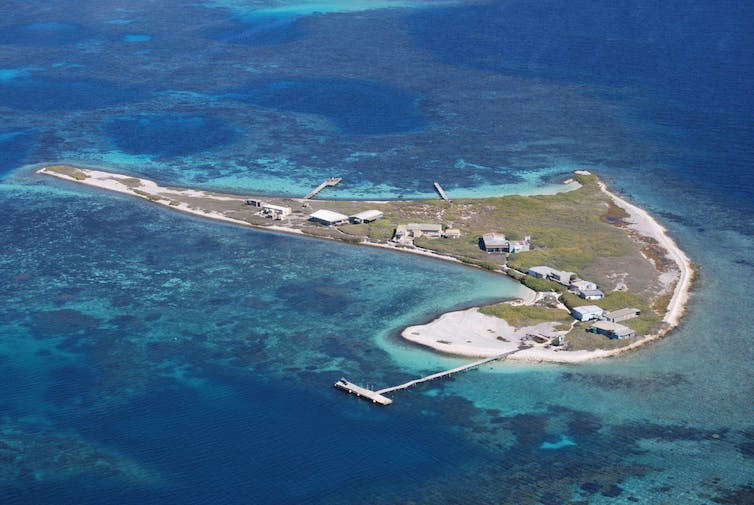 The gruesome Abrolhos murders somewhat faded from view during the 18th and early 19th centuries. But by the 1890s they had re-entered the public imagination, not least because Perth’s Western Mail chose, somewhat curiously, its Christmas issue (1897) to publish a full English translation of Pelsaert’s account.

Since then there have been numerous novels and retellings of the tale. Bruce Beresford directed a 1973 TV movie. Many stories have been accompanied by illustrations. But the wreck has provoked surprisingly little response from visual artists.

In the new exhibition, two Perth-based artists, Robert Cleworth and Paul Uhlmann, collaborated with a team of archaeologists from the University of Western Australia, who recently excavated several new burials of the murder victims on Beacon Island. The exhibition features a presentation of these recent digs and projections of the grave sites alongside works by Cleworth and Uhlmann. By referencing skeletons and skulls, the two artists create new forms of contemporary memento mori, or artworks that remind us we all must die. 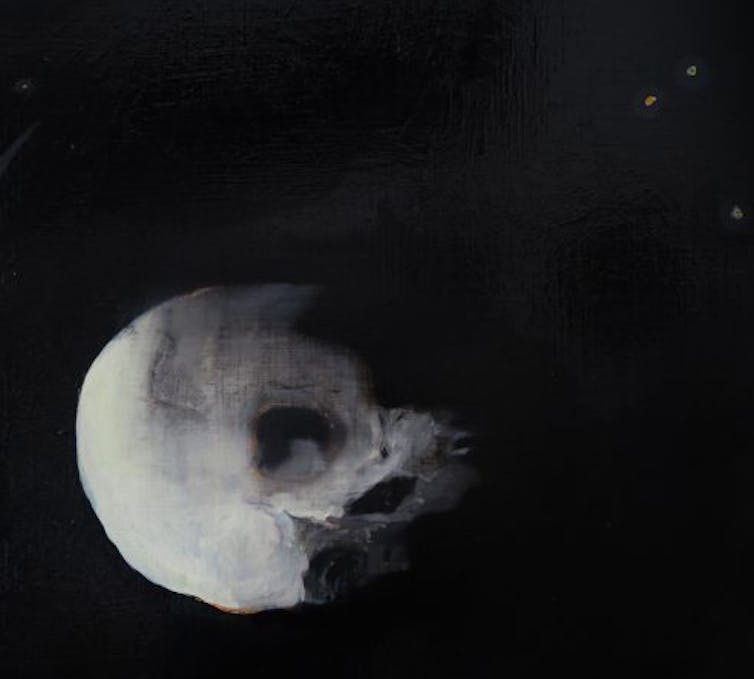 Much of the work on display is inspired by the art and life of Johannes Torrentius, a Dutch painter convicted in 1628 for his alleged blasphemy, heresy and Satanism. Although not aboard the Batavia, Torrentius was widely believed to have inspired Cornelisz in his gruesome deeds.

Besides his heretical statements on religion, Torrentius had offended Dutch Calvinists with a number of bawdy pictures. All of these transgressive works were destroyed, yet titles such as A Woman Pissing in a Man’s Ear give some indication of their subject matter.

Ironically, the only Torrentius painting to have survived is an allegorical still life that warns against immoderate behaviour. During his lifetime, the painter would have created numerous vanitas paintings, works that address life’s vanities, assisted by a camera obscura, a darkened box in which a lens projects an external image – a forerunner to our modern cameras. 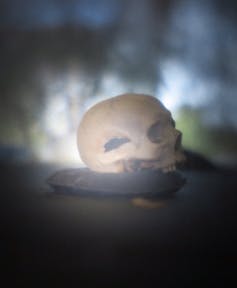 Uhlmann has used the same device to create a triptych of photo prints that show the skull of one of the Batavia murder victims from three different angles. The skull, recovered in 1964, was missing a small bone fragment, the result of a blow to the head. This fragment was unearthed during the latest excavations. Uhlmann has used both the skill and the fragment in his study to demonstrate the impermanence of life and the transience of the skull.

Skulls also feature prominently in the paintings on display by Cleworth, and not just skulls of humans but also that of a wallaby. The skull testifies to the hunger and hardship of the victims: wallabies were not indigenous to Beacon Island and must have been brought there by the shipwreck survivors. This is another example of how art and science are brought together in this show. 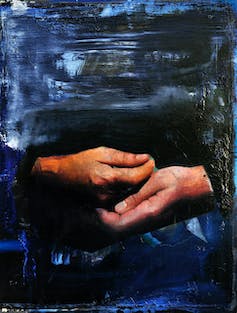 A second painting by Cleworth shows two hands hovering in front of a deep-blue background. The broad brushstrokes evoke the sea surrounding the islands. The hands are those of the lead mutineer, Cornelisz.

Somewhat ironically, no one died by these hands during the reign of terror. Cornelisz had ordered his cronies to kill, rather than committing the murders himself. Nevertheless, when Pelsaert returned to Batavia’s Graveyard and immediately dispensed justice, he ordered Cornelisz’s hands be chopped off before he was hanged on the gallows.

These artworks don’t simply retell the story of the Batavia and its cruel aftermath. They explore the nexus of art and science, using processes similar to those of the 17th century. They not only offer reflections on the unimaginable cruelty that took place four centuries ago, but provoke a new reading of past events.

Batavia: Giving Voice to the Voiceless is at the Lawrence Wilson Art Gallery until December 9 2017.