At 11:21pm Sydney time on Thursday August 17, 2017, an alert on a private email list informed thousands of astronomers worldwide that the Advanced LIGO-Virgo interferometer had detected another gravitational wave event.

But this time it wasn’t from a binary black hole merger like previous detections: early indications were that this latest wave detection was from two neutron stars merging.

This was really exciting; our chance to see a gravitational wave event with conventional telescopes for the first time. Astronomers had been waiting for this for more than 20 years, ever since the LIGO project started.

By chance, we were both at a conference in Washington DC and so for us the alert arrived just after 9am. People reacted immediately, rapidly emailing colleagues and ducking out to discuss the alert. 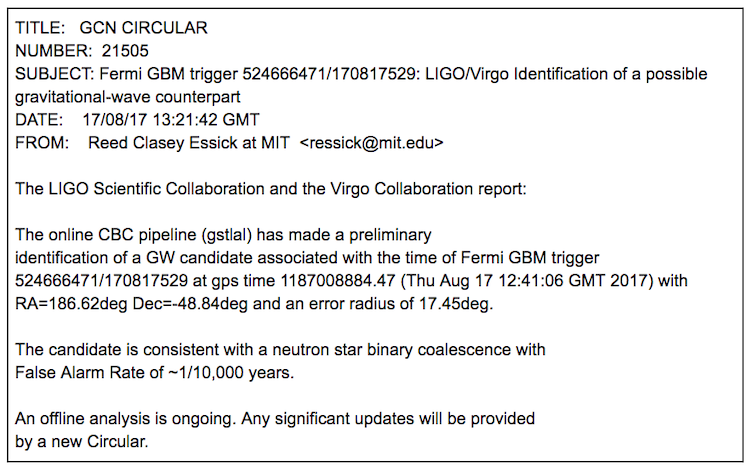 The original alert that was sent out telling astronomers about the detection of gravitational waves. Screengrab, Author provided

We started planning our observations immediately: we knew the target area would rise over Australia at about 11am Sydney time.

What followed was two frantic weeks of collaborative research that lead to the first confirmation of radio emission from a gravitational wave event.

Finding the event: a needle in a haystack

LIGO-Virgo could only pinpoint the event to an area of about 150 times the full Moon.

But if we could detect electromagnetic radiation (optical or radio waves) then we could pin down the merger’s location to a single galaxy. Australian Radio telescopes have the capability to do this (and not just at night, unlike optical telescopes).

Back on the email list, reports were flooding in. Teams around the world were pointing their telescopes at the target region, scanning the galaxies to see if anything unusual was happening.

At 6am Sydney time we texted Douglas Bock, director of CSIRO Astronomy and Space Science, to let him know we’d be submitting a proposal to observe using the Australia Telescope Compact Array (ATCA) in Narrabri, NSW, that day. 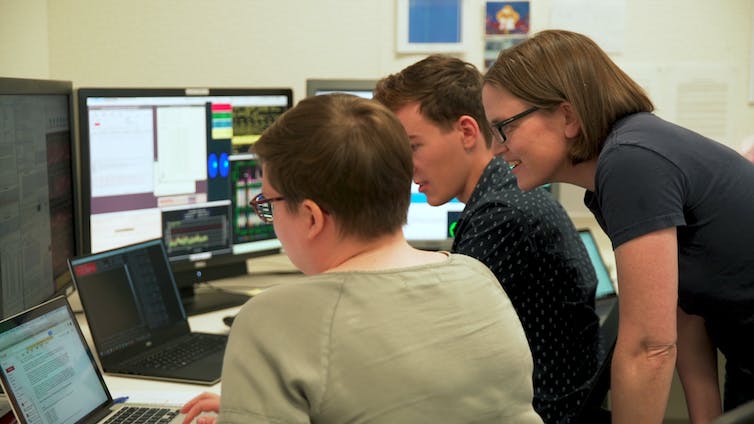 We applied for what is known as Target of Opportunity time: permission to override the scheduled observing and take over the telescope.

We then rang our colleagues Christene Lynch and Keith Bannister, and PhD student Dougal Dobie to ask them to head to the CSIRO Science Operations Centre in Marsfield, Sydney, to observe.

After a few phone calls and emails, we were allocated the whole day of ATCA observing and we began searching for a radio signal from the merger. We were the first radio telescope to target this event.

Just after midday in Sydney, there was an exciting new development. A new optical source, near the galaxy NGC 4993 seen in the constellation Hydra, had been detected by the One-Meter Two-Hemisphere collaboration.

Optical and near-infrared images of the first optical counterpart to a gravitational wave source in the galaxy NGC 4993. 1M2H/UC Santa Cruz and Carnegie Observatories/Ryan Foley

This was rapidly confirmed by several other groups.

The emails became a deluge. We fired off messages between Washington and Sydney adjusting our observing strategy. Tara set off for the return trip to Sydney as we coordinated and analysed observations from airports and hotels.

We were in constant communication with other groups - there was excitement in the air, but also tension, as people collaborated and competed at the same time.

What does radio emission tell us?

A neutron star merger is a complex event. The gravitational waves come from the final orbits just before a black hole is formed.

The resulting explosion blows the matter from the neutron stars out into space. As this material blasts outwards, it interacts with gas to create a powerful shock that generates radio emission.

Analysing this data tells us what the total energy of the explosion is, and what the surrounding area is like.

This the first time these explosions, which may be responsible for forming heavy elements like gold in the universe, have been definitively identified.

Theoretical models for neutron star mergers predict that radio emission will occur after the emission at other wavelengths.

Nine days after the event, X-ray emission was detected so we kept monitoring the likely host galaxy, NGC 4993, every few days.

Finally, on September 3, our collaborators made a tentative detection of radio waves with the Very Large Array in New Mexico. 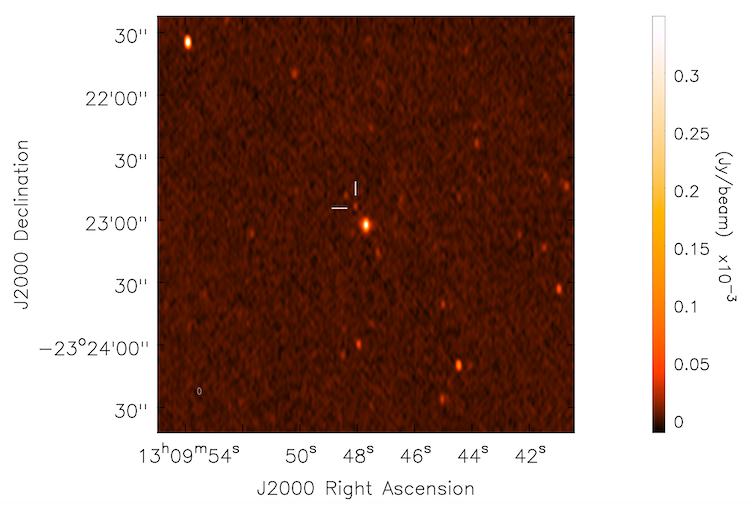 We confirmed their detection the following day, making this something everybody could trust. This was the first time radio waves had ever been detected from a gravitational wave event.

After double- and triple-checking our results with the help of Emil Lenc, we released an email alert to the community.

Read more: We beat a cyber attack to see the ‘kilonova’ glow from a collapsing pair of neutron stars

By then, we had been working non-stop for two weeks, juggling the project across time zones as we monitored the unfolding event. Then the race began to write up the results for publication, with our work published today in Science.

The past month has been exhilarating but strange, working secretly on embargoed results that had already been partially leaked, and were somewhat of an open secret in much of the astronomy community.

Our radio observations have made an important contribution to understanding an incredible phenomenon. We continue to monitor this event to help understand the details of the explosion.