After weeks of rumour and speculation, scientists have today finally announced the death spiral of two neutron stars as a source of gravitational waves.

It’s among the biggest news for science in decades, because the findings help shed light on many aspects of astrophysics, including the origins of cosmic explosions known as gamma-ray bursts and of some heavy elements in the universe, such as gold.

The latest detection has scientists excited because most predictions had favoured the detection of gravitational waves from coalescing pairs of neutron stars. Yet the first and all subsequent detections prior to today’s announcement had only come from collisions of black holes.

Read more: We beat a cyber attack to see the ‘kilonova’ glow from a collapsing pair of neutron stars

It was back in 2015 when the Advanced LIGO (Laser Interferometer Gravitational-Wave Observatory) detectors heard the whoop of the first gravitational wave signal ever detected.

The first strong signal was so surprising that the international teams at the LIGO observatories spent weeks trying to work out if someone could have secretly put signals into the data!

Since then there have been more black hole signals, but there was no sign of the predicted neutron stars. 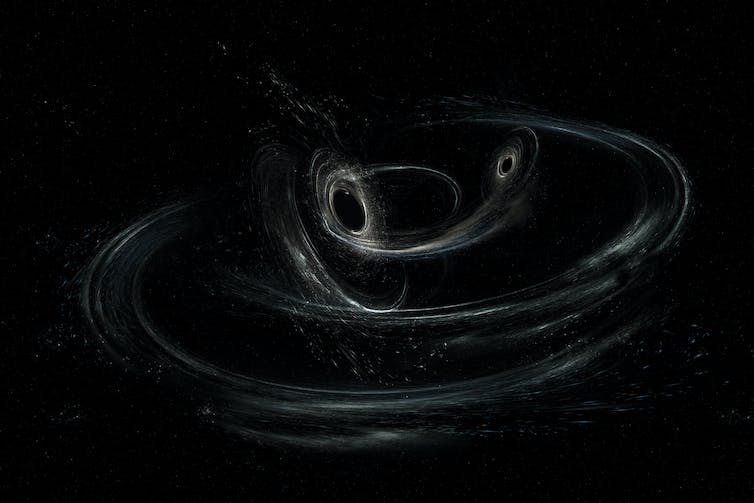 Physicists have long considered neutron stars to be perfect sources of gravitational waves.

Neutron stars are balls of neutrons, about the size of a city but weighing in at about 1.4 times the mass of our Sun.

The first neutron star was discovered by Jocelyn Bell Burnell in 1967, and in 1974 Russell Hulse and Joseph Taylor found a pair of neutron stars spiralling slowly together in the Milky Way, a discovery that led to their Nobel Prize in Physics in 1993.

Caltech physicist Kip Thorne – one of three people awarded this year’s Nobel Prize for Physics – led a campaign to build huge laser interferometers, optimised for detecting the final death spiral of a pair of neutron stars.

Barry Barish (another of this year’s Nobel Prize winners) internationalised the LIGO observatories, bringing Britain, Germany and Australia into the collaboration.

More than just a wave

During the decades of development of gravitational wave detectors, astronomers had become fascinated by vast bursts of gamma rays coming in from the distant universe at the rate of about one every day.

Israeli physicist Tsvi Piran proposed in 1989 that some of these bursts could be created by coalescing neutron stars. If this was the case, then bursts of gravitational waves would be accompanied by bursts of gamma rays.

Many astrophysicists modelled the violent coalescence of merging neutron stars. Some of the superdense neutron rich matter would be flung into space, where it would be relieved of the massive pressure inside the neutron stars.

Uncompressed, it would go off like a vast nuclear fission bomb, creating a slew of heavy elements such as gold and platinum. Within minutes a hot fireball would shine brightly, powered by the decaying radioactivity of the new formed elements.

Advanced LIGO‘s two 4km detectors in the United States have been operating since 2015. The 3km Advanced Virgo detector in Europe came online on August 1 this year. 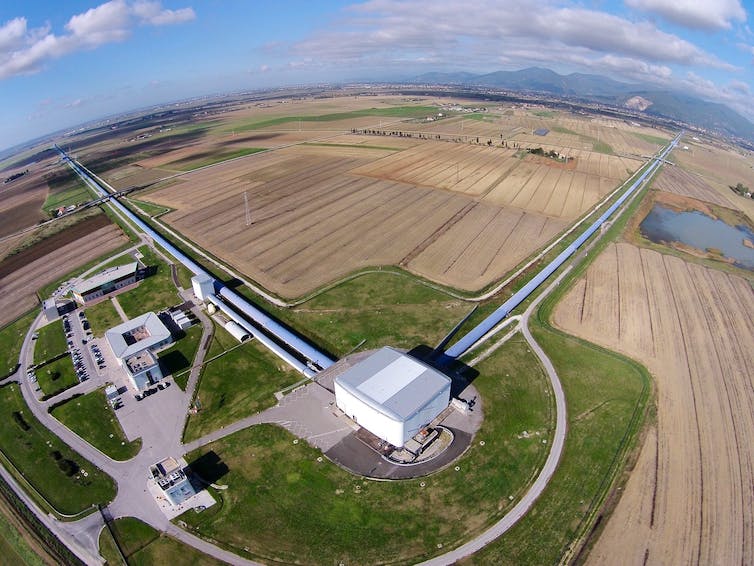 Europe’s Virgo becomes the third detector in the hunt for gravitational waves. The Virgo collaboration

Many optical telescopes had signed up to receive any alerts from LIGO and Virgo.

Meanwhile, NASA’s orbiting gamma ray telescopes Fermi and Swift continued their continuous monitoring of the skies. Billions of dollars worth of astronomical hardware was poised and ready in August 2017.

Thursday August 17, 2017, was the day our detectors registered a slowly rising siren call that lasted for a minute and finished with a sharp crescendo.

It wasn’t the brief whoop of a pair of large black holes but the much slower death song of a pair of neutron stars with total mass about three times the mass of the Sun. Two seconds later the Fermi satellite detected a short gamma ray burst. Within minutes the source direction had been roughly localised.

The alert goes out

Within 30 minutes alerts went out to telescopes across the planet. Telescope schedules were interrupted, and before long a bright new object was found in galaxy NGC 4993, seen in the Hydra constellation, and visible in the southern hemisphere in August.

The new object decayed away exponentially over a few days as might be expected for a radioactively powered nebula.

NGC 4993 is 130 million light years away. The arrival of gravity waves and gamma rays within 2 seconds of each other tells us that to a precision of a part in a million billion, both types of wave travel at the same speed.

Read more: After the alert: radio 'eyes’ hunt the source of the gravitational waves

The fact that two completely different types of radiation, one that is a ripple of space itself, and the other that travels through space, should travel at exactly the same speed could seem astonishing, yet it is exactly what Einstein predicted.

The event is a treasure trove of astrophysics. From one faint gravitational sound, a momentary burst of gamma rays and the faint fading glow of exploding nuclear matter, we have the first direct measurement of the distance of galaxies.

It will take many years to fully explore the data, and meanwhile more and more data will flood in as we continue to open the gravitational wave spectrum with more observatories on earth and in space. The new era of multi-messenger astronomy has begun!