Exposure to traumatic experiences in childhood can have a negative impact on the development of the brain when it’s most vulnerable. Cases of childhood maltreatment are more common than reported; conservative estimates show over 45,000 Australian children were exposed to maltreatment in 2015 and 2016. Adversity in childhood can include experiences such as emotional, physical, and sexual abuse, neglect, and the sudden loss of a parent or caregiver.

Early life adversity is a major risk factor for the development of psychological and behavioural problems later in life. Higher rates of depression, suicidality, anxiety disorders, post-traumatic stress disorder, and aggressive behaviour have been reported in adults who experienced childhood maltreatment.

Traumatic childhood events also contribute to increased drug use and dependence. Initiation of drug-taking behaviour begins at a much younger age in those who’ve experienced childhood trauma. Exposure to stressful events in childhood can increase the impact of stressful events throughout life. Add divorce or unemployment to childhood trauma and someone can be more likely to develop psychological disorders or addiction.

Read more - Complex trauma: how abuse and neglect can have life-long effects

But not all children who experience early life stress go on to develop mental illness. It seems how you cope with stressful experiences is not only influenced by your prior experiences, but also your genes, coping responses and brain regulation. Chemicals in the brain such as cortisol and oxytocin are important for stress and emotional regulation.

Oxytocin is a hormone naturally produced by the brain. It’s commonly called the “love hormone” as it promotes sociability, emotional regulation, and bonds between a mother and child, as well as between romantic partners.

The amount of oxytocin in the brain varies from person to person. Women and men differ in their regulation of oxytocin, but it’s important in day-to-day functioning for everyone. Variations in the oxytocin gene even affect how we respond to stress. 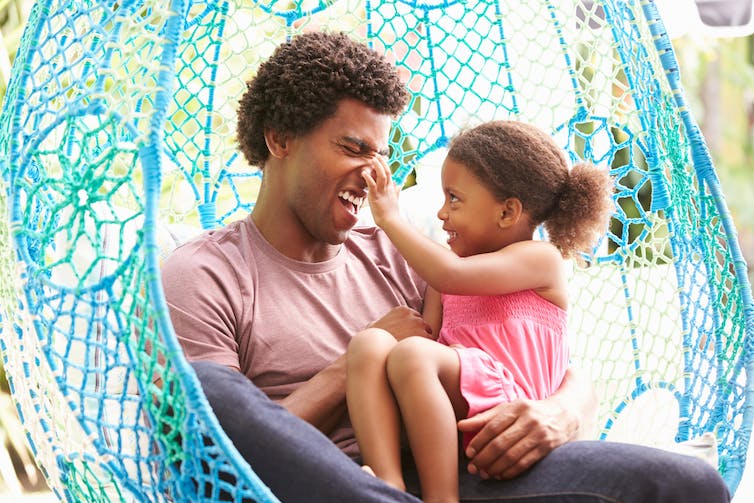 Affection from our parents in early life sets up a healthy oxytocin system. from www.shutterstock.com

Exposure to nurturing and loving parents can contribute to the normal development of this system. Exposure to adversity, such as stress or illness, can detrimentally affect the development and functioning of oxytocin and the oxytocin receptor.

The impact of early life stress

Studies in rodents have taught us how the development of the oxytocin system is altered by early trauma. Early life stress changes oxytocin levels within the hypothalamus and the amygdala, which are important brain regions in the production of oxytocin and emotional regulation respectively. Even the functioning of the oxytocin receptor is altered following early life trauma.

Read more - Getting ‘em young: how early does mental health intervention need to be?

Research has shown how early life stress can impact on the developing oxytocin system resulting in a greater susceptibility to develop drug dependence and being less capable to cope with stress.

In turn, a well-regulated oxytocin system can support greater resilience against excessive drug use and addiction. Animal studies show oxytocin can boost the reward of social connection, lower the effect of drugs, reduce anxiety, and improve management of stressors. But we still need more research in humans.

Early life stressors do not only impact the oxytocin system. A number of other systems that work with oxytocin also change, such as important neurotransmitters and the stress system. This results in changes to how these systems interact and contributes to changes in the oxytocin system and ultimately behaviour.

As oxytocin is critically involved in emotional regulation, understanding how the developing oxytocin system can be affected early in life can help us understand how early adversities can have a long-lasting impact on mental health.