Death does not concern us, because as long as we exist, death is not here. And when it does come, we no longer exist.

What is striking is the volume of the respective public debates. Everyone is talking about marriage equality; very few are discussing assisted dying.

Given that the ethics of assisted dying are more complex than marriage equality, and what happens in Victoria is likely to provide a template for other states, why is it receiving so much less attention?

Public ethical debates are fuelled by emotion and psychological biases on both sides. In the case of assisted dying, most of us are not like Epicurus: we fear death. We hate talking about it.

Despite the fact that polls show that 73% of Australians favour assisted dying, it is not clear whether the legislation will pass, although the mood seems to be leaning slightly in favour: 40 out of 87 MPs in the Legislative Assembly told the Herald Sun they would vote yes.

Further reading: As Victorian MPs debate assisted dying, it is vital they examine the evidence, not just the rhetoric

So, there should be an enormous impetus to show MPs the level of public support. But it has been rather muted. Perhaps for similar reasons we post photos of weddings on Facebook, but not funerals: both are important, but only one makes good dinner party conversation.

Our fear of death might even be linked to our love of marriage, according to terror management theory (TMT). Neuroscientist Claudia Aguirre writes:

When we’re faced with the idea of death, people defensively turn to things they believe will shield them from death, literal or otherwise. Thinking about death also motivates people to indiscriminately uphold and defend their cultural world views, whatever those may be.

TMT has been linked to our development of regulation and rituals around sex. 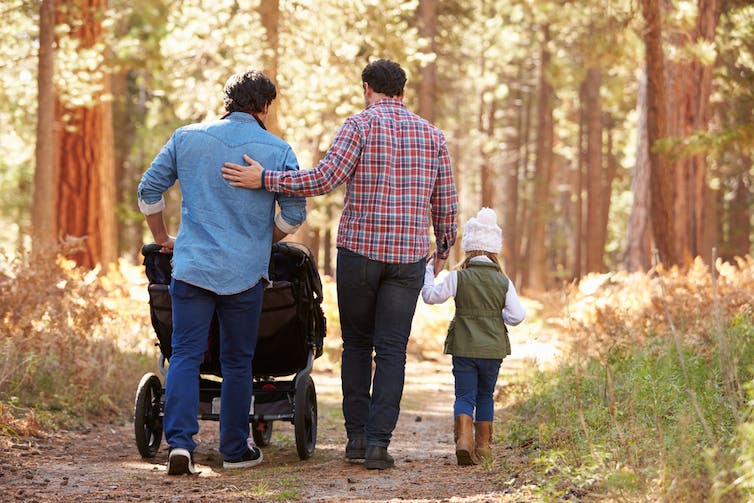 In evolutionary terms, sex is more important than death, which is one of the reasons marriage equality provokes such heated debate. Shutterstock

So, a fundamental commitment to marriage being between a man and a woman may be more of an immovable foundation on which group membership is based to guard against our shared fear of death than an ethical position that can be defended or rebutted on rational grounds.

While fear suppresses talk about dying, marriage equality involves sex. People are intensely interested in love and sex. And sex has been more important than death in evolutionary terms.

As evolved animals, we were only here to survive long enough to reproduce. Reproduction is evolution’s goal, and so practices around its rituals and norms are hugely important in evolutionary and religious terms.

Religions and societies seek to control reproduction. In the Judeo-Christian tradition, sex was to occur within marriage between one man and one woman. Death at an old age is of much less evolutionary significance.

Further reading: To Christians arguing ‘no’ on marriage equality: the Bible is not decisive

We are social animals, motivated to support our in-group and reject out-group members. Tribalism can help explain our devotion to football teams, for example. We have developed social signalling to show our group which side we are on and maintain trust.

Add to that a status quo bias, and public debates where the topic in question is seen to express something foundational about ourselves can become little more than cheering for our own team.

Anchoring is a psychological bias that means we evaluate how good or bad something is relative to the anchor of existing examples.

In the UK, the 2013 same-sex marriage legislation was fairly uncontroversial. One reason could be that civil partnerships – same-sex marriage in all but name – were created back in 2004. Each step in the UK’s progress towards marriage equality was a short step from the previous state of being.

In contrast, the Australian campaign against same-sex marriage portrays the choice as a paradigm shift in our culture, extending far beyond marriage. Former prime minister Tony Abbott linked the debate to political correctness, gender fluidity and even the date of Australia Day, saying:

This isn’t just about marriage … there are lots and lots of implications here and we’ve got to think them through before we take this big leap into … the dark.

For assisted dying to be an appropriate activity for medicine, we should show that death can be an appropriate therapeutic end and in a patient’s best interests. That is, that their life is no longer worth living.

That is an extremely difficult case to prove, and I haven’t seen any good arguments for how to evaluate that. Why wouldn’t we just go on what a competent person says? If a suffering person believes they’re better off dead, they’re probably right.

But here is another way to think about it. The Victorian legislation will provide assistance only to those in the last year of life from a physical illness. They are effectively in the process of dying.

While palliative care may be able to control pain and suffering, it cannot do everything. Shutterstock

One major objection to the assisted dying bill is that we don’t need it because good palliative care is sufficient. Relief of suffering is very important, and more should be spent on end-of-life planning and palliative care.

But this objection is complicated for several reasons. If palliative care is outstanding, people won’t request assistance in dying. So there is no need to ban it.

More importantly, while palliative care may be able to control pain and suffering, it cannot do everything.

Together with colleagues at Barwon Health and Oxford University, we surveyed 382 people from the general population and 100 attendees at an advance care planning clinic, where people think about and express their values relating to end-of-life care. We didn’t ask them about assisted dying, but we did ask them to rank four factors at the end of life: pain relief, dignity, independence and living as long as possible.

The highest proportion of both groups ranked the relief of pain and suffering as the most important value, followed by maintaining dignity and remaining independent.

Living as long as possible was ranked as most important by the lowest proportion of participants – only 4% of palliative care patients and 2.6% of the general population (30–35% regarded this as either not important or not very important).

People care not only about pain relief, but also about dignity and independence at the end of life. These are much more subjective and less amenable to control by palliative care. So while palliative care can address part of what people care about, it may not be able to address all their values.

Moreover, people can already shorten their lives by more than a year for any medical condition, or no medical condition at all, by refusing to eat and drink by mouth. It takes around ten days to die of thirst. Such people could be given palliative care to relieve their suffering during this period of suicide.

But surely the Victorian law offers a better way to die? As with the palliative care, this kind of death does not provide the dignified death, or the independence, that people value.

As distressing as public debate on heartfelt, emotive issues like assisted dying and marriage equality can be, it is an important collective exercise. Like many other people, I thought the marriage equality survey was a waste of money. But on reflection, this idea maybe misplaced. When the views of one part of the community are deemed politically incorrect and suppressed, they foment, then erupt in a Brexit or a Trump.

Debate is vitally important to democracy. What we should hope is that people engage in these debates with their heads, not their hearts. It will take considerable effort on both sides to overcome the psychological obstacles to finding the most fair and reasonable policy.

The art of living well and the art of dying well are one.