Many of us have experienced the effects of sleep deprivation: feeling tired and cranky, or finding it hard to concentrate. Sleep is more important for our brains than you may realise.

Although it may appear you’re “switching off” when you fall asleep, the brain is far from inactive. What we know from studying patterns of brain electrical activity is that while you sleep, your brain cycles through two main types of patterns: rapid eye movement (REM) sleep and slow-wave sleep.

Slow-wave sleep, which occurs more at the beginning of the night, is characterised by slow rhythms of electrical activity across large numbers of brain cells (occurring one to four times per second). As the night progresses, we have more and more REM sleep. During REM sleep we often have vivid dreams, and our brains show similar patterns of activity to when we are awake.

Read more – Health Check: three reasons why sleep is important for your health

What are our brains doing while we sleep?

Sleep serves many different functions. One of these is to help us remember experiences we had during the day. REM sleep is thought to be important for emotional memories (for example, memories involving fear) or procedural memory (such as how to ride a bike). On the other hand, slow-wave sleep is thought to reflect the storing of so-called “declarative” memories that are the conscious record of your experiences and what you know (for example, what you had for breakfast).

We also know experiences are “replayed” in the brain during sleep - the memories of these experiences are like segments from a movie that can be rewound and played forward again. Replay occurs in neurons in the hippocampus - a brain region important for memory - and has been best studied in rats learning to navigate a maze. After a navigation exercise, when the rat is resting, its brain replays the path it took through the maze. Replay helps to strengthen the connections between brain cells, and is therefore thought to be important for consolidating memories. 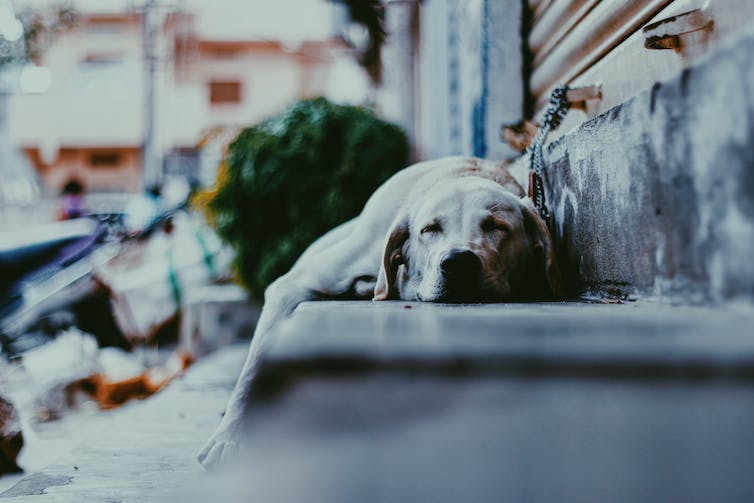 While we’re asleep our brain does a tidy-up, only keeping what it needs. Sashank Saye/Unsplash

But is it that important for you to remember what you had for breakfast? Probably not – that’s why the brain needs to be selective about what it remembers. Sleep allows the brain to sift through memories, forgetting certain things so as to remember what’s important. One way it may do this is by “pruning away” or “scaling down” unwanted connections in the brain.

A leading theory of sleep function - the “synaptic homeostasis hypothesis” - suggests that during sleep there is a widespread weakening of connections (known as “synapses”) throughout the brain.

This is thought to counterbalance the overall strengthening of connections that occurs during learning when we are awake. By pruning away excess connections, sleep effectively “cleans the slate” so we can learn again the next day. Interfering with this scaling down process can, in some cases, lead to more intense (and perhaps unwanted) memories.

The importance of sleep for keeping our brains optimally active may be reflected in our changing sleep patterns as we age. Babies and children sleep much more than adults, probably because their developing brains are learning much more, and being exposed to new situations.

Later in life, sleep declines and becomes more fragmented. This may reflect either a reduced need for sleep (as we are learning less) or a breakdown in sleep processes as we age.

Read more – Children and sleep: How much do they really need?

Sleep is also needed to do a bit of brain “housekeeping”. A recent study in mice found sleep cleanses the brain of toxins that accumulate during waking hours, some of which are linked to neurodegenerative diseases. During sleep, the space between brain cells increases, allowing toxic proteins to be flushed out. It’s possible that by removing these toxins from the brain, sleep may stave off neurodegenerative diseases like Alzheimer’s.

What happens if we have a bad night’s sleep?

Getting enough sleep is important for attention and learning during our waking hours. When we are sleep deprived, we can’t focus on large amounts of information or sustain our attention for long periods. Our reaction times are slowed. We are also less likely to be creative or discover hidden rules when trying to solve a problem.

When you haven’t had enough sleep, your brain may force itself to shut down for a few seconds when you’re awake. During this “micro-sleep” you may become unconscious for a few seconds without knowing it. Drowsiness while driving is a leading cause of motor vehicle accidents, with sleep deprivation affecting the brain just as much as alcohol. Sleep deprivation can also lead to fatal accidents in the workplace – a major issue in shift workers.

Read more - Explainer: how much sleep do we need?

The beneficial effects of sleep on attention and concentration are particularly important for children, who often become hyperactive and disruptive in class when they don’t have enough sleep. One study found getting just one hour less sleep per night over several nights can adversely affect a child’s behaviour in class.

What are the long-term effects?

The longer-term effects of sleep deprivation are more difficult to study in humans for ethical reasons, but chronic sleep disturbances have been linked to brain disorders such as schizophrenia, autism and Alzheimer’s. We don’t know if sleep disturbances are a cause or symptom of these disorders.

Overall, the evidence suggests having healthy sleep patterns is key to having a healthy and well-functioning brain.