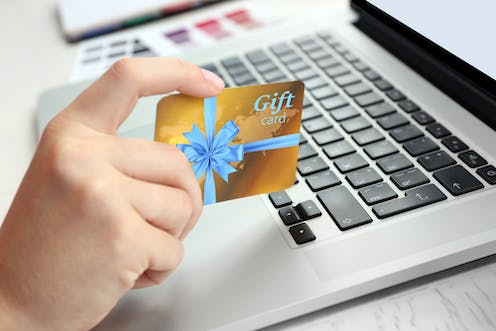 The New South Wales Parliament is introducing legislation, creating a three year minimum expiry date on gift cards. This reform will go some ways towards solving the problem of unredeemed gift cards. But there are other issues besides short expiry dates.

Research from the United States, which has a five year minimum expiry date, shows an extended expiry term only slightly improves the problem of unredeemed cards.

Minimum expiry dates are just the start of necessary reforms to gift cards. Gift card terms and conditions vary widely, making it hard for consumers to understand what their rights and obligations are.

Data shows that between 10% and 27% of gift cards in Australia go unredeemed.

Read more: Xenophon is right to call for law reform on gift cards

The use of gift cards in Australia is growing, with about A$2 billion spent and 32 million cards issued in 2014 alone.

But complaints about gift cards are also increasing. So much so that gift cards have featured in two government inquiries in the last five years.

The first was prompted by growing concerns regarding risks faced by gift card holders. The second arose from the failure of Dick Smith Electronics.

Expiry dates are usually clearly identified on the gift card but some online terms and conditions do not specify the term. Enforcing a fixed term would be beneficial to consumers in this regard.

But one government inquiry found no strong evidence that consumers would be assisted by a mandatory minimum expiry date for gift cards.

In fact, it’s possible gift cards with shorter expiry dates have higher redemption rates. The shorter time frame forces customers to use the cards fast, meaning customers are less likely to lose or forget to use the cards.

Other issues with gift cards

In addition to expiry dates, common problems with gift cards arise from the terms and conditions and the inability to use gift cards when the retailer becomes insolvent. This last point was particularly evident in the wake of the collapse of Dick Smith Electronics.

Longer expiry dates will not stop consumers losing out if a retailer becomes insolvent. Gift card holders are unsecured creditors and in the event of insolvency there is very little to stop the holder from losing the value of their card.

Redeeming a gift card quickly is the only means of minimising this risk, something a longer expiry date will not necessarily encourage.

In the course of research I am currently undertaking, I have also found issues with a wide range of gift card terms and conditions.

For instance, some cards allow partial redemption, but not refunds or cash reimbursements, even for small balances remaining on the card after redemption.

Some terms and conditions specify limits on the use of the gift card. For example, the card must be used in store, but not online. Consumers unaware of these limitations may be unpleasantly surprised when their gift card is unable to be used.

Some retailers offer replacement of lost or stolen gift cards provided proof of purchase or card identification number is available. When the holder of a gift card is not the original purchaser this may be problematic. If you do purchase a gift card as a present, you probably should either keep the receipt or pass it on to the receiver along with the gift card.

Regulating expiry dates is one step towards attempting to have consistency between gift cards, but could also cause more confusion if expiry dates are different in various states of Australia.

Ultimately regulation will not replace ensuring gift card holders understand all terms and conditions of individual gift cards. Protect yourself by making sure you know what you can, and can’t, do with any gift card you have.