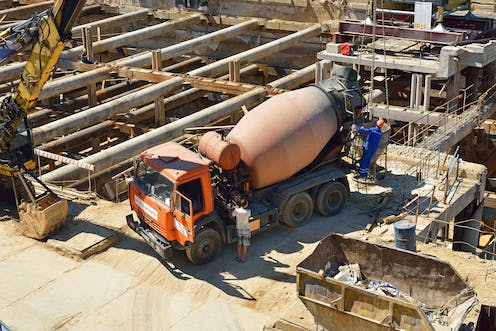 The Productivity Commission has released the first in a planned series of five-yearly updates on productivity in Australia. The report shows that there is much the Australian government can do to boost productivity and living standards.

These include changing how government delivers or controls education and health, and how it manages infrastructure. Interestingly, for the Commission, policy to improve productivity in the private sector (primarily tax and regulation), while still important, plays second fiddle.

The Commission backs up its recommendations in these huge domains by a compendium of analyses spread over hundreds of pages in 16 supporting papers.

Read more: Why reforming health care is integral for our economy

The Productivity Commission’s review comes amid a period of slow productivity growth in Australia and around the developed world. Fifteen years ago, most economists expected that the internet revolution and the rapid shift of manufacturing to China would, for all the disruption they entailed, sustain strong growth in the rich world. But those hopes were dashed.

A wide range of research has identified many possible culprits for the productivity slowdown. These include mismeasurement, that “easy wins” such as universal education have already been used up, ageing, risk aversion, and a hit to investment and innovation from the global financial crisis.

One of the Commission’s background papers covers many of these contributors to slow growth.

Australian productivity has grown faster than in many other high-income economies since the financial crisis, largely thanks to the mining boom and to our having avoided a deep recession.

But productivity growth has not been strong enough to keep wage growth strong in the face of declining export prices and some broader weakness as the mining investment boom comes off. Getting policy settings right is urgent to reduce the risk that Australia slides into the stagnation that other high-income economies have experienced.

The Commission’s estimates imply that its policies would eventually boost GDP by at least two per cent, with additional non-market benefits in longer lives and quality of life.

In health, the report recommends changing funding arrangements, cutting low-value treatments, putting the person at the centre of health care, shifting to automated pharmacy dispensing in many locations, and moving to tax alcohol content on all drinks. The Commission estimates that the value of these reforms is at least A$8.5 billion over 5 years.

In education, the report makes recommendations to build teacher skills, better measure student and worker proficiency, extend consumer law to cover universities, and improve lifetime learning, including better information about the performance of institutions. The Commission does not put a dollar value on these reforms.

Read more: Myth busting claims on the impact of the company tax cut

In cities and transport, the report recommends improved governance to stop poor projects being built, budget and planning practices to properly provide for growth and infrastructure, and policies to get more value out of existing and new assets (including road user charges, extending competition policy principles to cover land use regulation, and replacing stamp duties with land tax). The Commission estimates that these reforms would be worth at least A$29 billion per year in time.

To improve market competition, the report suggests a single effective price be placed on carbon, an end to ad-hoc interventions in the energy market, better consumer control of and access to data, and reforms to intellectual property to support innovation. The Commission estimates that these reforms would be worth at least A$3.4 billion per year.

Finally, to improve government, the report recommends that the states and the Commonwealth develop a new formal reform agenda that clarifies who has responsibility for what, tax changes, measures to improve fiscal discipline, and tougher accountability for implementation of agreed initiatives. The Commission does not put a dollar value on these reforms.

The review’s omissions are informative, and some are glaring.

First, cutting company taxes is conspicuously absent from the proposals. It seems unlikely this omission is an oversight. It would seem, instead, that the Commission does not see a company tax cut as a priority for productivity growth, and is happy for government to make its own case for a tax cut.

Still, the report would have been stronger had it considered the tax mix more fully. There is credible case for a company tax cut, though it is not the only way to stimulate investment, it would take years to pay off, and it would hit the budget without increase in other taxes or spending cuts.

Second, the report gives short shrift to population growth. Governments are racing to keep pace with population growth in Melbourne and Sydney in particular, yet the report does not consider how population contributes to congestion, how it dilutes the value of natural resource rents, and how the challenges it creates for governments make it more difficult for them to deliver reforms that would boost productivity.

Third, the report does not give enough attention to reforms to improve market functioning. Many consumers in retail markets for services like energy and superannuation do not know how to identify good products, and so consumers often bear the costs of excess marketing or an excess of providers.

It seems likely that the Commission did not want to prejudge the subject of a current Commission inquiry on superannuation, but other markets have similar problems.

There are other gaps. The report does not give enough attention to macroeconomic stability, or even note the risks posed by the Australian house price boom. It does not mention the problematic National Broadband Network. It pays too little attention to the role of social safety nets in helping people manage risks and making the economy more flexible.

And finally, the report could have made stronger recommendations for better measurement. It is ironic that it finds the biggest opportunities in the health and education sectors, whose output is not measured with much accuracy.

Read more: Myth busting claims on the impact of the company tax cut

Overall, the report is something of a landmark, and the Treasurer deserves credit for commissioning it. It condenses much of the policy advice the Productivity Commission has made in recent years, and adds new insights (for example, on land use).

It provides credible, if incomplete recommendations for improving health and education, and cities and transport. It undersells the value of further reforms to private sector regulation and tax. But it underscores how much governments can do on the “home turf” of the things they control most directly.

Now it is up to Commonwealth and state governments to absorb its insights, integrate them into their agendas, and put them into action.