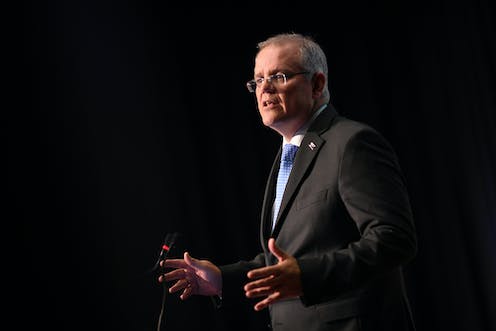 Just as the government hopes it is making progress on the energy conundrum, it finds itself struggling on another front of deep public disgruntlement – the NBN.

The rollout of what’s generally considered a second rate model is producing a high level of complaints. Monday’s ABC Four Corners program showed how customers in Australia are getting an inferior service compared with New Zealanders.

The government predictably is blaming Labor, though much of the trouble stems from scaling back to a cheaper version than the one it inherited. Malcolm Turnbull, who oversaw the NBN as communications minister, argues it’s obvious that as more houses are connected, the number of complaints rises. That logic only goes so far.

Faults with household and business internet services are sensitive consumer issues. The blame game only increases people’s irritation. It’s been the same for months with electricity, as the government lambasted Labor while trying to get together its own energy policy, which it released last week.

Essential polling released on Tuesday indicates that at this early stage people are not hostile to that policy, but many are confused.

More than a third (35%) approved the proposed National Energy Guarantee, with only 18% opposed. But the “don’t know” category is 47%.

People divided fairly evenly when asked whether they approve the government’s decision not to include a Clean Energy Target in the new plan – 35% approved, 32% disapproved, and 33% were “don’t knows”.

But many people retain their strong attachment to renewables. Asked whether they approved the government decision to phase out subsidies for these, 41% disapproved, 32% approved.

This result shows that in political terms, it could be sensible for Labor to accept the basic structure of the government’s scheme - and promise to improve on it. At Tuesday’s Coalition party room, Turnbull predicted Labor would propose a higher level of renewables within the Coalition’s policy framework.

If so, that would provide at least a measure of bipartisanship, which would at least encourage investment.

As the government and opposition argue over the claim the new policy could bring down prices by a small amount – a proposition to be tested by the modelling the government commissioned last week - the Essential polling showed the public are healthily sceptical. Only 16% think it will; 31% believe it will increase prices.

The grim reality faced by the government is that it is hard to get any messages through the high level of public distrust, and this is exacerbated when the messages chop and change.

It’s not just in the energy area where this has happened. Since the Coalition won office in 2013 it has had to alter course on many policies and much of its initial ambition.

The early attempts of the Abbott government at swingeing changes quickly collided with the realities of an angry public and a truculent Senate.

Releasing a report on Tuesday from the Productivity Commission (PC) on Australia’s productivity performance, Treasurer Scott Morrison said reform was harder now than in the 1990s, when there was “a lot of low hanging fruit” and “the burning platform” of recession “focused the debate and compelled greater bipartisanship”.

These days, he said “reform comes more stubbornly and incrementally”.

“We also need to understand that many Australians are now far more sceptical of change. Whenever governments mention the word ‘reform’ or ‘productivity’, they get nervous. They’ve seen this movie before.

"Unlike last time when economic reform was a mystery to most, this time around Australians are more alive to the costs of change as well as the benefits.

"Plus, the economic and political bandwidth available for change is narrower than it once was, made more difficult by the binary way change is viewed and exploited. Who are the winners and who are the losers? Where is the conflict?” Morrison said.

While his argument is right, other factors were also important to achieving reform in the 1980s and early 1990s under the Hawke-Keating government. Some of the change involved trade offs, under the accord with the trade union movement. And reform was better sold by the political leadership than today.

The recommendations are a mixed bag of old and new, the sensible and - as happens with the PC - the near impossible, either politically and practically (such as automatic dispensing of medicines).

The report’s language is redolent of that used by Labor, notably when it says that “a key issue will be to ensure that future economic, social and environmental policies sustain inclusive growth — by no means guaranteed given current policy settings, and prospective technological and labour market pressures.

"Productivity growth provides a capacity for higher incomes and poverty alleviation — either directly through higher wages or indirectly by increasing the capacity for funding transfers to lower-income households.

"The motivation for limiting inequality extends beyond its intrinsic value to the desirability of avoiding too great a dispersion in incomes, given evidence that this can, in its own right, adversely affect productivity growth. Public support is also more likely for reforms that offer benefits to the bulk of people.”

Shadow treasurer Chris Bowen said: “The Productivity Commission has pointed out that investment in our human capital is the key to economic growth. Well we agree, we agree strongly.”

Morrison is alert to this possible political crossover.

“I haven’t got up here today to talk about a new inclusion agenda”, he told a CEDA function. “I’m talking about a productivity agenda”.

“From a Liberal-National perspective, we’re coming at this quite differently from our political opponents. This isn’t about social justice. This is about more and better paid jobs, because I think that’s the best justice for anyone. … This is about lifting living standards.

"I’m not trying to settle scores in health and education as some sort of social justice wars. I’m just trying to lift people’s wages.

"This is not the product of ideology, it’s the product of economics and the economics say pretty clearly that people [who] are healthier and better equipped through the education system are going to do better.”

Sharing ground with Labor can be uncomfortable.