In August last year, a third of the residents of the North Island township Havelock North fell acutely ill with gastroenteritis after their water was contaminated with campylobacter.

Following a long dry spell, the heaviest daily rainfall in more than ten years had washed the pathogenic organism from sheep faeces into the aquifer that supplies the town’s drinking water. The Havelock North supply, like many in rain-rich New Zealand, was not treated with chlorine or other disinfectants, and this was the country’s largest ever reported outbreak of waterborne disease.

This is just one example of how climate change may affect our health, according to a report released by the Royal Society of New Zealand today.

It turns out that the Goldilocks rule - “not too hot, not too cold” - applies to more than porridge. There have been many reports, such as those published by the Intergovernmental Panel on Climate Change and the Lancet Commission on Climate Change, that detail how aspects of human physical and mental are effected by a changing climate.

There is an optimum climate, related usually to what is most common or familiar. Deviations, especially if substantial and rapid, are risky.

The RSNZ report is organised around eight prerequisites for good health, including community, shelter, water and food - all of which are threatened by climate change. 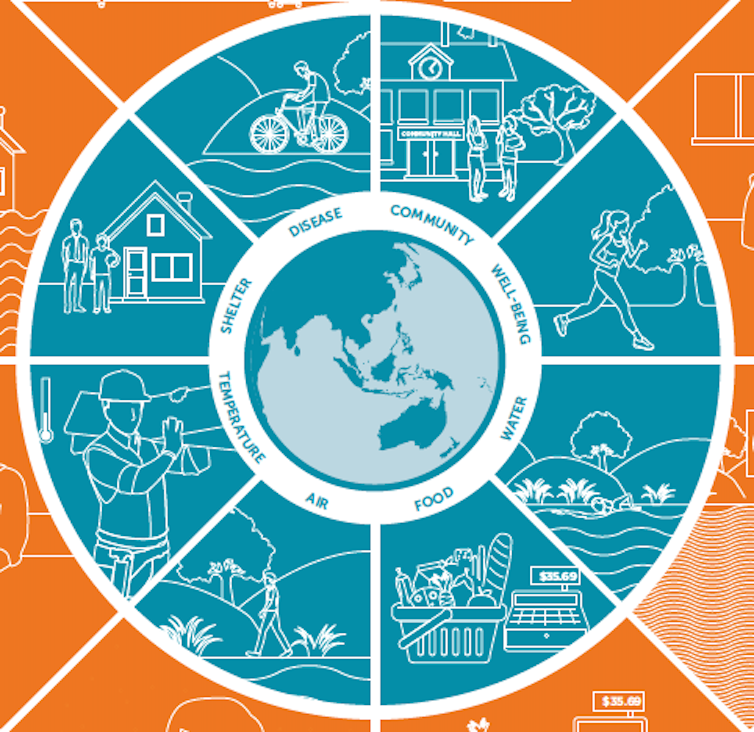 The building block metaphor is apt. It is unlikely that climate change will undermine health in new and unexpected ways. Instead we expect it to act as a threat multiplier. Where there are weaknesses in the foundations of public health, rapid changes in temperatures, rainfall and sea levels will magnify damaging effects.

The impacts will include direct effects. More intense rainfall, especially on the western side of the country, will test health protection systems, as in the case of Havelock North.

But the impacts may also be indirect. The RSNZ report points out that changes in the climate may disrupt ecosystems, with knock-on effects for human health. As water temperatures rise, algal blooms occur more frequently, and human pathogens such as the vibrio species are found in higher concentrations.

There may be more intense exposure to pollen and other allergens, a particular concern given the relatively high rates of asthma that apply in New Zealand.

Read more: Can we blame climate change for thunderstorm asthma?

A reliable supply of food is one of the most important ecosystem services. The global food system is simultaneously more productive than ever before, and also exquisitely vulnerable. We depend more and more on a small number of crops, grown in mono cultures on larger scale and in fewer locations, dependent on longer supply chains and frequently requiring irrigation and heavy use of artificial fertilisers.

Climate change threatens the production and distribution of food in many ways. For instance, the rice crop in southern China currently fails due to high temperature stress once every century or longer, but this will be a once-in-10-year event with 2–3°C global warming, and once every four years if average temperatures rise by 5–6°C.

Climate change also acts through social stressors. Rising sea levels, combined with heavy rainfall, threaten many settlements around the New Zealand coast and elsewhere. The community of South Dunedin is one of the most vulnerable.

On a broader scale, internationally, it is projected climate change will displace very large numbers of people. The recent flood of refugees to Europe (sparked, in part, by climate extremes) illustrates the detrimental effects to security, community cohesion and health that may result.

The RSNZ report acknowledges that it is not just physical health that is important. Depression, anxiety, grief and other manifestations of loss and conflict may occur when familiar environments are damaged and social connections threatened. This is most evident following disasters such as droughts and floods.

The report refers to the particular threat climate change poses to Māori. Not only are Māori over-represented amongst those with low incomes, and at greater risk therefore of poor health from hazardous environments. Māori culture also embodies a strongly developed sense of relationship with place that carries with it responsibility and obligations. Climate change challenges this guardianship role.

There is another dimension to health impacts that is not discussed in the RSNZ report. I refer to the damage that may be caused by the way we respond to climate change. Mark Carney, governor of the Bank of England, calls them “transition risks”. These are not trivial concerns, Carney says, because managing climate change successfully will require radical change, and the implications may be far reaching.

Expanded use of biofuels might compete with food crops, for instance. Carbon- pricing regimes may also aggravate food insecurity in the poorest populations. In low-income countries, reducing numbers of livestock to control methane emissions might be detrimental unless there are alternative sources of protein, energy and nutrients.

However, there are opportunities, too. The co-benefits agenda gets only a brief mention in the RSNZ report, which is a pity, since win-win interventions may provide a politically palatable route to substantial cuts in greenhouse emissions. For example well designed, comprehensive taxes on food could avoid a billion tons of greenhouse gas emissions and also prevent half a million premature deaths each year.

This is particularly relevant to New Zealand and Australia as most of the gains would be made by cutting the consumption of red meat in rich countries.

The Royal Society report concludes that more research is needed to better quantify the health impacts of climate change. This is true, of course. But we know enough already about risks to pay close attention to potential solutions. The big question, in my view, is how we take carbon out of the New Zealand economy, rapidly, and in an equitable fashion, without disrupting the building blocks of health.

Maybe we can do better than avoiding harm. Transport, agriculture, urban form, food systems - in these areas, and others, there are substantial opportunities as well as serious risks.