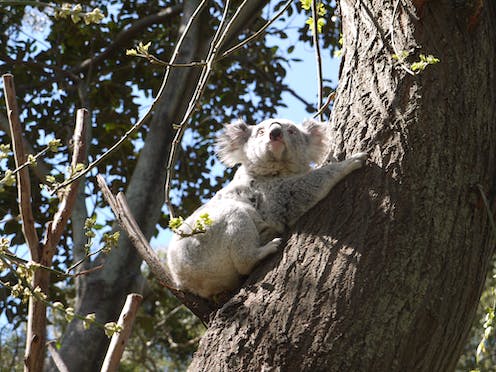 Koalas are stressed out by a range of pressures, from habitat loss to dog attacks.Edward Narayan, Author provided

Koalas are under a lot of stress. Heatwaves, land clearing and even noise pollution are all taking a toll.

Each year, hundreds of koalas are taken to veterinary clinics after being rescued from roadsides or beneath trees, and the...

Koalas are under a lot of stress. Heatwaves, land clearing and even noise pollution are all taking a toll.

Each year, hundreds of koalas are taken to veterinary clinics after being rescued from roadsides or beneath trees, and the incidences increase during the summer months.

Chronic and ongoing pressures such as habitat destruction are overwhelming koalas’ ability to cope with stress. Koalas are nationally listed as vulnerable, so it’s important to understand how they are affected by threats that can reduce life expectancy and their ability to cope with problems.

The term “stress” was coined in 1936 by Hans Sayle after experiments on rats. Sayle demonstrated that the adrenal glands, which sit on top of the kidney and produce the stress hormones adrenaline and cortisol, can swell in response to any noxious stimulus or due to pathological state. In addition, there are changes in the tissues and glands involved in the basic functioning of the immune system, reproduction and growth.

Read more: What happens to your body when you’re stressed

The short-term stress response is not necessarily bad, because it prepares the body to cope with external challenges. For example, tadpoles that are exposed to dragonfly nymphs grow larger and have bigger tail fins than other tadpoles.

However, chronic stress over a long time can seriously affect an animal’s health (humans included) and survival rates.

How do koalas respond to stress?

Koalas release the stress hormone cortisol in response to any unpleasant stimulus like being handled by humans (oddly, males are much more stressed by handling than females, unless the females are lactating).

Koalas have biological feedback mechanisms that can regulate the amount of cortisol they produce, so they can carry on with their day-to-day routine. However, if koalas are continuously stressed by something large and permanent, such as land clearing of their territory, it’s difficult for them to relax from a stressed state.

When this happens, the body undergoes a barrage of sub-lethal chemical changes. The resulting chronic stress can negatively affect the animals’ reproductive hormones and immune system function.

Koalas, like all animals that call Australia home, have basic physiological and behavioural adaptations needed for life in Australia’s often extreme environment. But human-induced threats such as land clearing continue to create ecological imbalances, and chronic stress makes it very difficult for koalas to cope with environmental change.

How much stress can a koala bear?

As my review of the research shows, the most common sources of stress for koalas are heat stress, car impacts and dog attacks. Foetal development of koalas could also be impacted by maternal stress due to lack of adequate food from gum trees in drought periods.

Urban and fringe zones (areas between rural and urban zones) are particularly stressful for koalas, with added pressures like noise pollution and a higher chance of land clearing.

All of these factors create a continual strain on koala physiology. The sight of a koala dead by the road is the distressing culmination of multiple, complex and dynamic environmental influences.

Clinical research has shown that wild koalas are suffering from chronic stress. Koalas are often rescued with signs of trauma, caused by car accidents, burns or dog attacks, which is very difficult to handle in veterinary clinics.

Koalas are a living treasure, the only extant representative of the family Phascolarctidae. They live exclusively on Australia’s east coast, but are considered rare in New South Wales and South Australia.

There are now numerous local dedicated koala conservation centres aimed at safeguarding their habitat and educating the public. Koalas also help increase public awareness of conservation among both young people and adults.

But more research is needed in studying how they respond to the stresses of life in a human-dominated landscape. Techniques such as non-invasive hormone monitoring technology can be used to provide a rapid and reliable index of how our koalas are being affected by stress.

Simply put, if land clearing is not reduced now we will continue to add invisible stress on koalas. Our children may one day be more likely to see a koala dead on the road than one happily cuddling their gum tree.