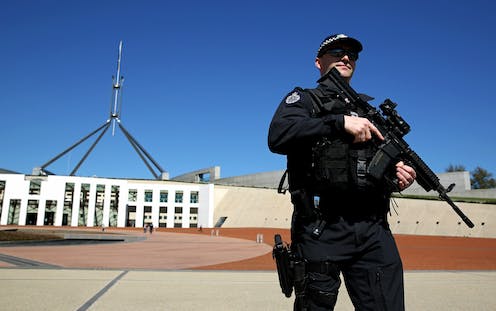 The Australian Federal Police (AFP) was embroiled in political controversy this week, with raids being conducted on offices of the Australian Workers Union (AWU). The raids were instigated by the Registered Organisations Commission (ROC), which is investigating donations made to activist group GetUp! and Labor candidates when Opposition Leader Bill Shorten was head of the AWU.

So what is the role of the AFP? How does the AFP work with other intelligence and regulatory agencies? What role should politics play, if any, in the activities of the police?

The role of the AFP

The AFP is a statutory authority established by federal legislation. It reports to the minister for justice. However, earlier this year it was announced that the AFP would be moved to a super Home Affairs Ministry, to be overseen by Immigration Minister Peter Dutton, himself a former Queensland police officer.

The functions of the AFP differ from state police forces in that it has a major role in combating crime impacting on Australia’s national security. It has a transnational, rather that merely a state, focus. It undertakes this task both in Australia and overseas. It also provides intelligence and training functions overseas.

The AFP provides community policing in the Australian Capital Territory and a uniform policing presence at nine designated Australian airports.

While the AFP has jurisdiction over federal offences, many states also have agreements that make AFP members special constables in each state. This allows them to utilise and enforce state laws.

The AFP works closely with other law enforcement and government agencies at the state, territory, Commonwealth and international levels as required by policing and investigation needs.

Who can ask the AFP to investigate?

Anyone can report a crime to the AFP. However, there are special protocols for government departments referring investigations to the AFP. They can refer when there are suspicions of a serious breach of federal legislation, or if AFP assistance is needed for an investigation to be conducted (that is, the other agency needs a search warrant executed to obtain evidence).

Decisions to assist are determined by using the AFP case categorisation and prioritisation model to ensure best use of resources.

With the creation of the Home Affairs Ministry, it is expected that the AFP will have an even closer relationship with law enforcement agencies such as the Australian Criminal Intelligence Commission, Australian Border Force and the Australian Security Intelligence Organisation.

The separation of powers

In basic terms, under the Westminster system, the separation of powers doctrine requires that, to avoid an oppressive government, power should be split between the parliament, executive government and the judiciary.

In reality, the involvement of politics in law enforcement is two-fold. First, the government of the day can set the broad priorities or policies that the policing agency needs to support. Second, on occasion, the police may be required to investigate politically sensitive matters.

In the case of the AFP, it receives ministerial direction as to the government’s priorities and expectations, which guides the performance of the AFP. The commissioner is responsible for the general administration of the force and control of operations.

There is a realisation that police may have to conduct politically sensitive investigations. In such cases, the AFP requires that the matter be raised with the minister responsible for the AFP by the relevant department minister at the same time as the matter is referred to the AFP.

Of note is that the minister is to play no role in the operational management of the issue and has no power or responsibility to decide which matters the AFP will or will not investigate.

When politics and policing don’t mix

We have recently seen this in the US when the then FBI director, James Comey, released details of the investigation into presidential candidate Hillary Clinton’s alleged misuse of official emails at a crucial stage of the election campaign. Many believe this action by the director had a profound impact on the election outcome.

In Queensland during the “bikie war”, the Queensland Police commissioner, Ian Stewart, released crime figures prior to their official release at the same time as parliamentary estimates hearings. This led to claims of politicisation of the police. The government of the day used these data to defend its policies. The commissioner also discounted entire crime categories to achieve a more positive result.

Simon Overland resigned as Victoria Police chief commissioner in the wake of a damming report by the Ombudsman about his release of inaccurate crime statistics during a state election.

This week is not the first time the AFP has been involved in politically charged investigations, nor will it be the last.

In 2015, the AFP conducted raids on the ACT office of the Construction, Forestry, Mining and Energy Union (CFMEU). The matter was challenged in the ACT Supreme Court and the AFP was found to have failed to follow appropriate procedures in obtaining the search warrants. It also failed to disclose necessary information.

After this week’s raids, union officials described the actions as:

… an outrageous abuse of power. It is an attack on democracy and it is massive overreach.

Shorten described the raids as:

… a political witch-hunt designed to throw mud in the hope that some will stick.

Yesterday, a political staffer of Liberal minister Michaelia Cash was forced to resign after being caught tipping off the media about the AFP raids.

Despite the political intrigue, the AFP will need to do its job. In the current case, the AFP needs to ensure its actions will withstand scrutiny, are legally defensible and fair.